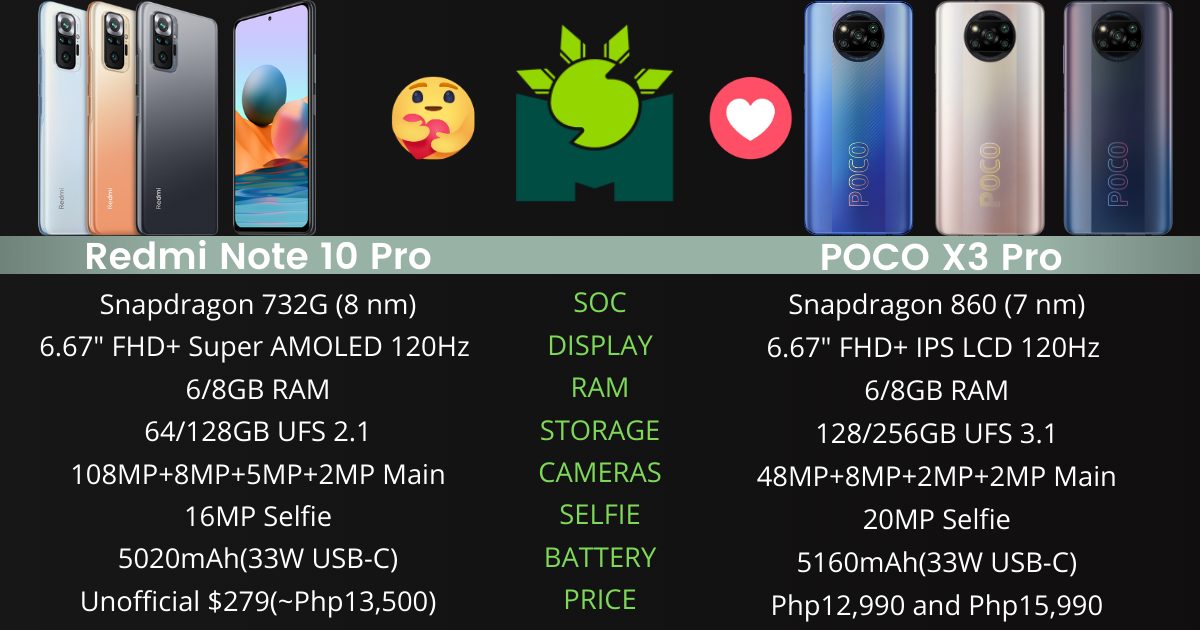 With the announcement of POCO X3 Pro the other day, it appears that there are only two mid-range phones that are worth your money, at least as of writing this article. One is the X3 Pro that boasts a high-end performance, and the other is the Redmi Note 10 Pro with a fast AMOLED display that’s yet to be priced in the Philippines. Sure, it’s a bit hard to compare two phones when one of them has yet to land, but that given how the Redmi Note 10 costs right now, it’s not that hard to speculate.

Which is the better buy between the Redmi Note 10 Pro and POCO X3 Pro?

In contrast to what we’ve written about the POCO X3 Pro, the back is actually using the same plastic material with a glossy finish as the X3 NFC. On the flip end, the frame is of metal, and the front gets a boost in protection thanks to the Gorilla Glass 6. Dust and splash resistance has made a comeback, with the X3 Pro gaining IP53 certification. Overall, POCO’s Pro phone has the same outfit as the X3 NFC, except for the new Metal Bronze color and the slightly tweaked design on the back.

Compared to the Redmi Note 10 Pro (or Pro Max in India), the overall footprint is the same, down to the display size. For whatever reason, the Redmi phone is notably lighter and thinner than the POCO one, thus making it easier to handle despite its size. Although it comes with IP52 dust and water resistance, the front panel is using Gorilla Glass 5, while the back, including the camera module, is only protected by plastic. However, we can’t deny that it’s the better-looking phone in this comparison.

Overall, the Redmi Note 10 Pro Max takes the cake when it comes to design and comfort. But if you’re used to the size of previous mid-range Xiaomi phones, you probably will feel at home with the X3 Pro.

Regardless of your choice, both phones deliver fast animation and are responsive due to their 120Hz refresh rate screen and 240Hz touch rate. The difference comes down to the quality and ability of each display to output colors and brightness. In this regard, the Note 10 Pro Max holds the advantage due to the ability to deliver up to 1200nits peak brightness in HDR mode, as well as the benefits of using AMOLED. On the flip end, the POCO X3 Pro is no crisper in quality since it’s also using FHD+ resolution. However, the IPS LCD may look dull yet color accurate, partly because it only reaches up to 450 nits regardless of its HDR support.

Snapdragon 732G (8nm) vs Snapdragon 860 (7nm) – Where POCO X3 Pro delivers the finishing blow, at least on the performance side, is the chipset. Sporting the latest Snapdragon 860 SoC, it’s the first phone on the market with the said chip, offering substantial power uplift over the 200-day old Snapdragon 732G. Though the difference in CPU and GPU capability is near, if not twice better, the 860 is still a re-released 855 from two years ago, which means no 5G modem. Nevertheless, that’s still plenty of power for the asking price of the X3 Pro. Additionally, it already comes with at least 128GB storage and 6GB RAM. As for the Note 10 Pro Max, it’s yet to be confirmed.

Onto the software side, both are running MIUI 12 based on Android 11. It’s just a matter of how many ads and bloatware come with them out of the box. And despite the use of AMOLED, the Note 10 Pro Max is still sporting a side-mounted fingerprint scanner like the X3 Pro. Another area where POCO shines is its dedicated vibration motor for the best haptic feedback. If you’re not fond of vibration feedback when typing or any sort of vibration at all, you shouldn’t worry about this.

Due to the massive difference in CPU and GPU performance, the X3 Pro leads the performance department by a wide margin.

On paper, it’s easy to decide which is the better phone when it comes to camera performance — the Note 10 Pro Max, all thanks to its 108MP main sensor. Although it has the hardware chops to output incredibly detailed photos and videos, the X3 Pro has the software chops to compensate for the older hardware it’s using, particularly the 48MP main sensor. With this kind of comparison, only an actual comparison will be able to tell the difference.

That said, we’re still giving the benefit of the doubt to the Note 10 Pro Max. When it comes to selfies, though, there’s a minor difference that we don’t think it’s going to matter as much.

Ever since the Mi 10, it feels like Xiaomi has never skimped out of audio quality. It’s nice to see stereo speakers with Hi-res wired audio playback support for either of these phones. Yes, both are still using a headphone jack. Codec-wise, we still need to confirm with Xiaomi what codecs are supported.

At least 4500mAh is found on either device, which may or may not be enough for the 120Hz displays. If that happens to be your case, realme GT offers a 65W charger that goes up to 100% in 35 minutes. The Redmi K40 Pro only offers 33W, but going to 100% in 52 minutes is still fast enough for most users. But then again, an advantage is an advantage, so realme wins this one.

Excluding the early bird price promo in the equation, POCO X3 Pro’s suggested retail price in the Philippines for the 6/128GB and 8/256GB models are Php12,990 and Php15,990, respectively. The Redmi Note 10 Pro is coming soon, but its base model still comes with 6/64GB, and the top model only packs 8/128GB. Since Redmi Note 10 is already selling for up to Php9,990, the Redmi Note 10 Pro Max might arrive somewhere around the price range of the X3 Pro.

Xiaomi might try to play you by offering a better display and camera or a better performing phone since POCO X3 Pro is heavily-marketed as a gaming device for cheap. But futureproofing-wise, the X3 Pro does have the capacity to last for a longer time.