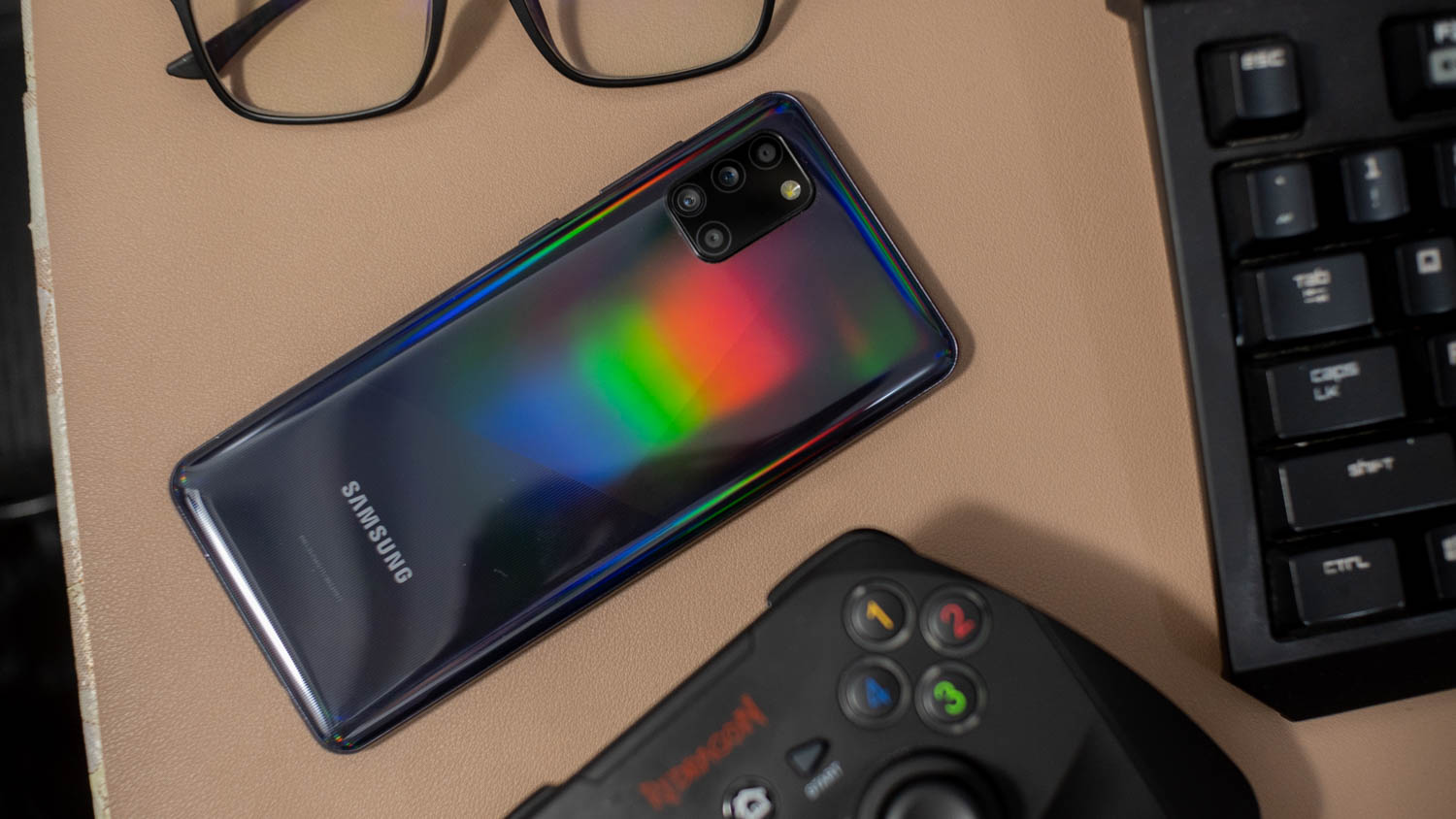 A year ago, Samsung managed to release the best mid-range smartphone in the market — the Galaxy A50. Two iterations later, the company lost the title to Xiaomi and Realme. Instead of learning from experience, the company brute forces its way into the competition by releasing tons of mid-range phones in nearly every price segment. At P17,990, the Galaxy A51‘s price is a tough pill to swallow. However, if you want something under P15,000, the Galaxy A31 costs P14,990 and offers nearly everything that the Galaxy A51 has. But what’s the catch? 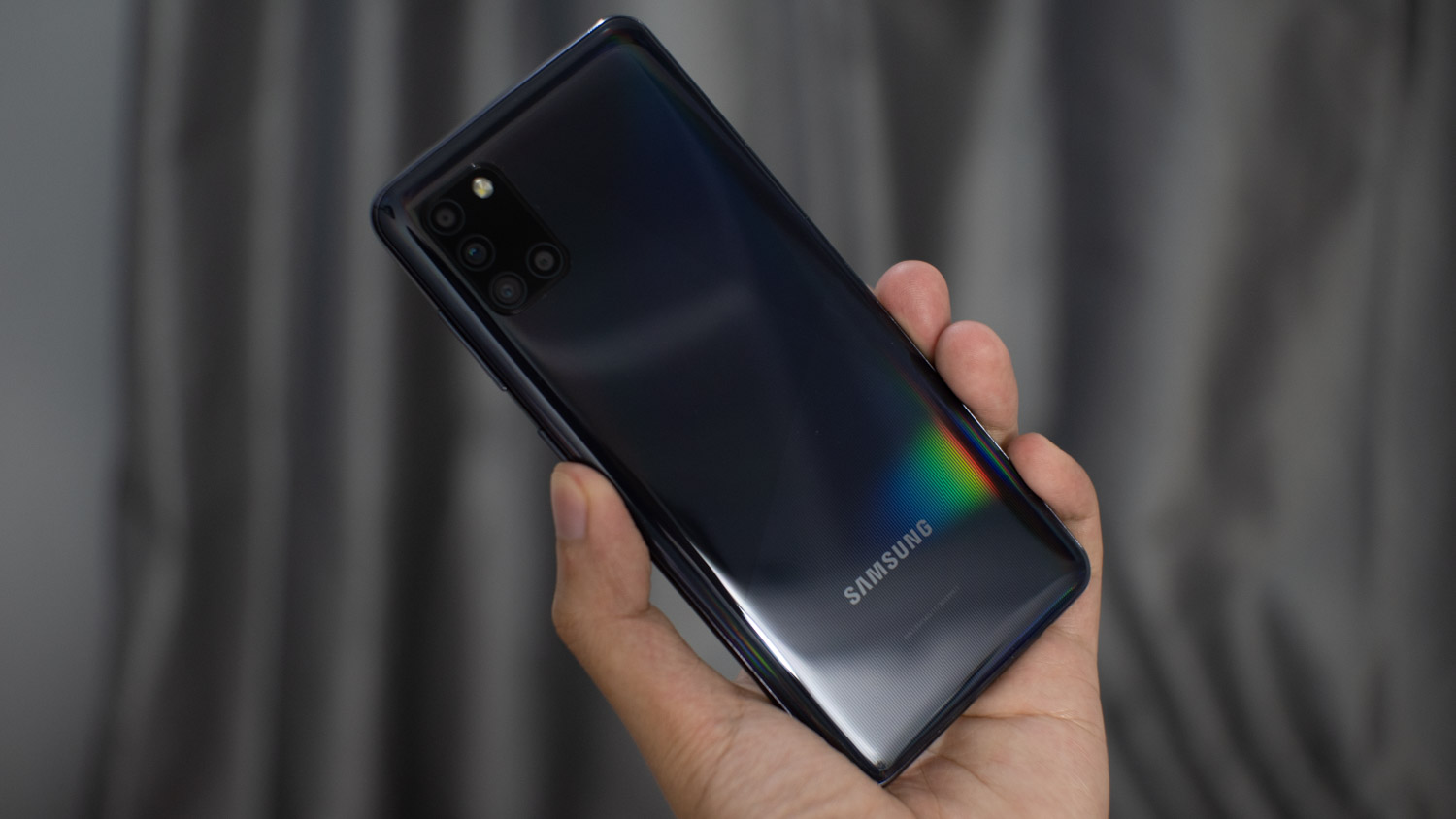 Much like the rest of the Galaxy A series, the Galaxy A31 is still using glasstic on the back, featuring rectangular patterns, that feel hollow and cheap in the hands. But, it’s something that I appreciate more because of the narrow body of the phone. It makes it a lot easier to hold with one hand, and I never had the anxiety of accidentally dropping the phone. Add the fact that the overall build is lightweight; I think I found the best scale for my average-sized hands. It’s obviously not as thin as more expensive Samsung phones but, I really don’t mind the slight heft, provided it’s packing a large battery.

The Galaxy A31 is available in blue and black in the Philippines. Unfortunately, the white and red colors seem reserved for different markets.

Touring around the phone, Samsung nearly provides a complete package here. The power button and volume rocker are on the left side while the audio jack, speaker, and USB-C port are on the bottom side. Only the dual-SIM tray with a dedicated microSD card slot is on the left side. I was surprised to see the orientation of the slots, and I feel like other manufactures should copy it as it feels rigid and less fragile. Really, the only gripe that I have here is the lack of the Bixby button. Not because I like Samsung’s AI, but because I like re-mapping it for other purposes.

Given the Galaxy A31 is packing quad-cameras, I like how the module isn’t protruding that much, so you won’t have to deal with wobbles here. Overall, the design isn’t flashy but, I think it should be on the top of your list if you’re looking for an ergonomic phone. 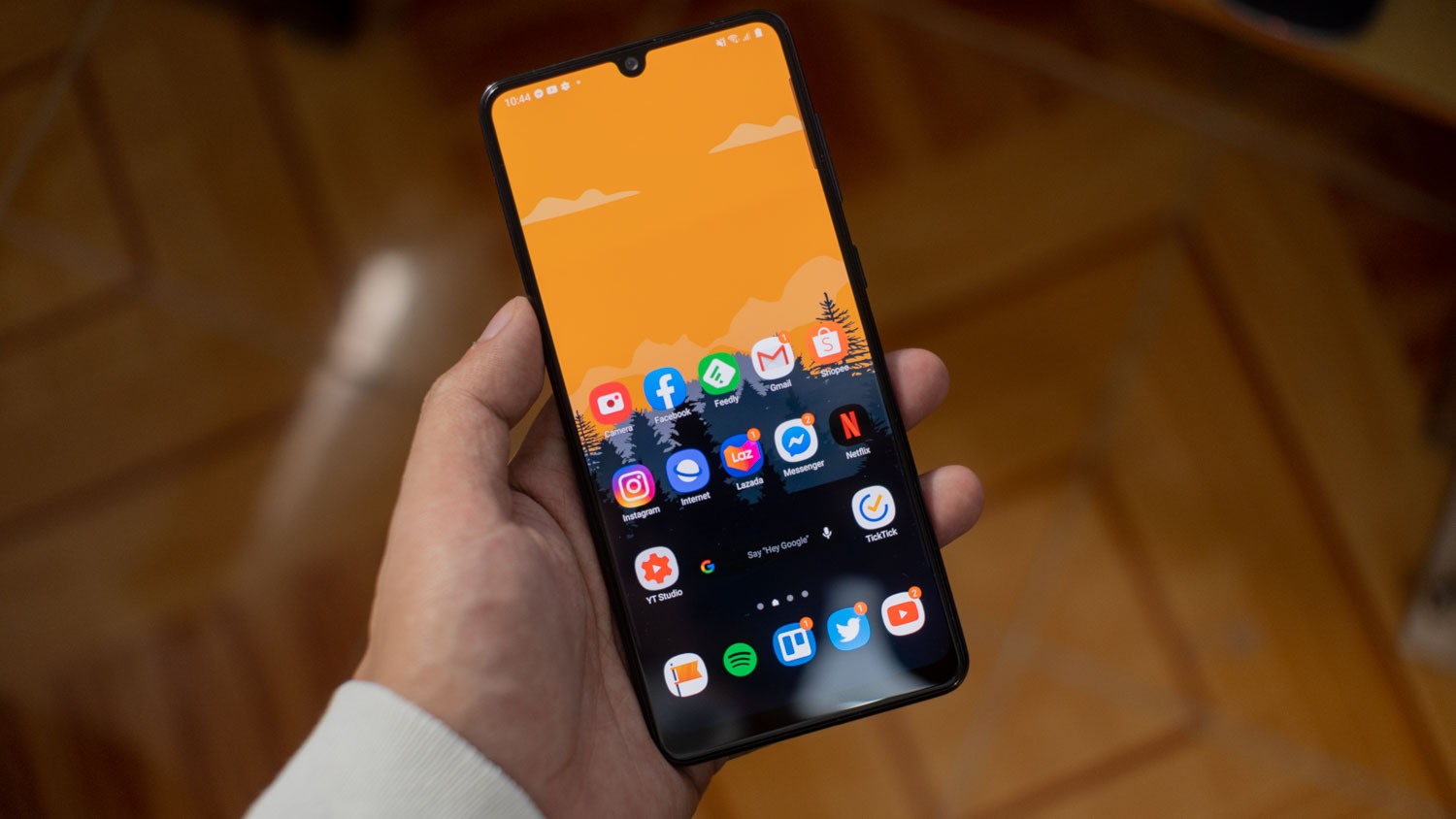 One of the best things about the Galaxy A31 is its 6.4″ Super AMOLED. Similar to the design, the screen size is the best match for my hands. I can comfortably type with one hand, albeit at a slower pace. The icons and text may look a bit cramped if you’re coming from a bigger phone, so that’s something to take note of when buying this phone.

One upside of having a smaller screen, though, is the crisp quality of images. Thanks to the higher pixels-per-inch number, there are no blocky pixels to see. Quality-wise, the FHD+ resolution and vibrancy of Super AMOLED are high-end level. It’s almost as bright as my Galaxy Note 9, with 400 nits typical and 600 nits max. It’s also as good as my two-year-old flagship phone when it comes to auto-brightness sensitivity. There’s support for HD viewing on Netflix, so that’s a bonus. However, there’s no HDR, which is to be expected. By default, the display is set to “Vivid” but features good color accuracy. I noticed, though, that the reds lean towards orange; however, you can always switch to “Normal” for a more natural viewing experience.

To cut cost, the Galaxy A31 uses a teardrop notch, aka Infinity-U, instead of the pinhole cutout. But regardless, the Galaxy A31 made me realize that I’d rather have a Super AMOLED phone than an LCD with a 90Hz refresh rate.

Since there’s Super AMOLED, there’s also an in-display fingerprint scanner. The performance is one of the things that surprised me with this phone. I have always hated in-display scanners due to their unreliability, but with the A31, I usually get into the phone after one or two attempts at a satisfying speed. Not the fastest, but good. 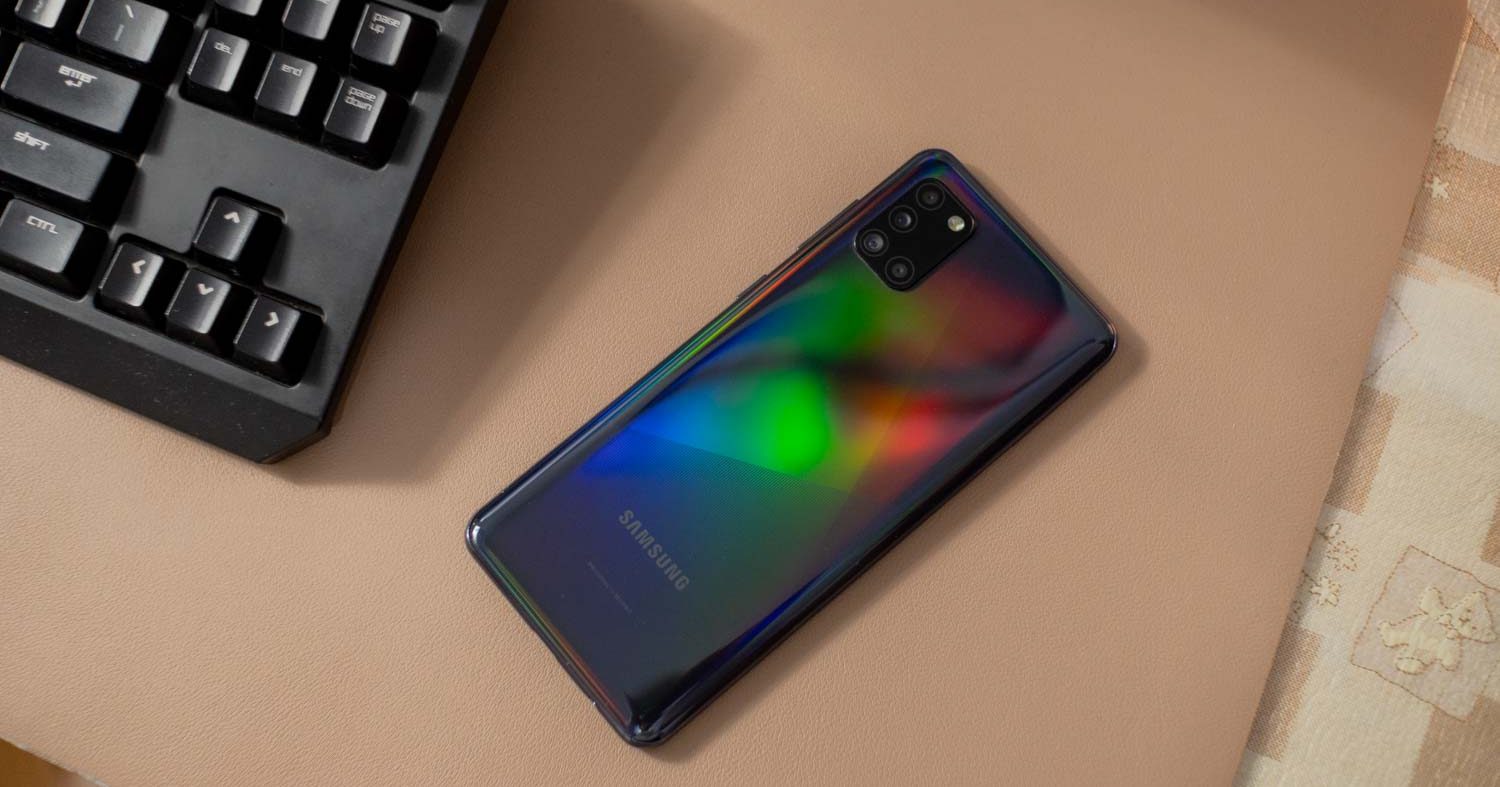 So, that one catch that we’ve mentioned earlier is the chipset, specifically MediaTek’s Helio P65. It’s a one-year-old SoC and, it’s behind the competition when compared to the likes of Snapdragon 720g of the Redmi Note 9S or Note 9 Pro. If I’m to describe its performance in Qualcomm terms, it’s like Snapdragon 665 but with fewer optimizations. You can still play games, albeit with lower frame rates and noticeable (but negligible) stutters. Mobile Legends is stable even during full action, with battle royale games killing the excitement with lags. In short, the Galaxy A31’s performance isn’t for gaming. However, that doesn’t mean it’s not enough for regular tasks.

Samsung One UI 2.0 requires at least SD 720g to perform nearly as smoothly as the Galaxy A71. While the Galaxy A31 did struggle a little bit with the P65, it’s very negligible. If you’re not into playing games, the performance is more than enough, especially with the 6GB RAM and 128GB combination. There’s no heating issue, too. If I were to buy a phone for this year, I wouldn’t rule out the Galaxy A31.

On paper, the 48MP quad-cameras seem to be well enough to hold its ground against the competition. The Galaxy A31 even features 8MP ultrawide, 5MP macro, and 5MP depth. Typically, you can record videos up to [email protected], provided the price point. But due to the limitation of the hardware — the Helio P65, it’s capped at [email protected] with no EIS in tow. And since we’re looking at a MediaTek ISP, the post-processing is slightly worse than a Qualcomm counterpart. In fact, there’s no Night Mode for photos nor Pro Mode for video. Unfortunately, all these translated to my shots with the phone.

The photos out of the main sensor are fine. The details are well-balanced, although the colors are a bit saturated at times. Auto-focus is a bit slow to respond, so you have to tap on the subject most of the time. As usual, ultrawide is only there to get wide shots and, it’s serviceable for the price. The macro lens, unfortunately, is disappointing even with the 5MP output. Even with good lighting, the quality is blurry. Perhaps, this is because of the fixed focus. And speaking of, the focus distance is not short. You should check out the Redmi Note 9s for what I think is one of the best phones for macro photography. The depth sensor, however, is quite good. Edge detection only needs a bit of optimization, but the overall quality is solid, especially detail preservation.

One quirk you need to know when capturing photos is that the viewfinder shows the shot with high saturation, but when you take the photo and preview it, it’s like an entirely different shot(but in a good way). Also, even though Night Mode is not present, HDR is aggressive enough to lift the shadows back.

Due to the lack of EIS, the video quality of the A31 is also disappointing. The details are oversharpened, and the highlights are almost always blown out, making for a limited dynamic range. Even with the ultrawide lens, the hardware isn’t enough to provide you a stable shot. You will need a gimbal to get stabler footage out of the phone.

For the 20MP selfie camera, it’s the same story; however, it’s worse. Details are soft even with good lighting and, the contrast is out of whack. It’s another case of “it’s not all about megapixels.”

While I don’t have any problems with the raw performance of the Helio P65, it’s the software side that really puts me off. Personally, I’d rather have Snapdragon 665 here than the P65, given the lack of camera capability and improvements.

I appreciate Samsung not pulling any stops when it comes to the battery of the Galaxy A31. The 5000mAh capacity, at first, felt like it’s above average during my first two charges, but, after that, I consistently get up to eight hours of screen time with most of my days playing Exos Heroes, streaming videos, and a couple of hours of music playback.

Going from zero to 100 percent via 15W adapter requires 2 hours and 15 mins. It’s a bit slow for my taste, but at the very least, it has fast charging here.

I wouldn’t rely too much on the south-firing speaker as the quality is tinny. At max volume, the speaker’s loudness is a bit underwhelming but, there’s no distortion. The audio jack is a different story, as you may have expected. Best to use a wired or wireless audio accessory for the best sound experience.

At P14,990, the Galaxy A31 could’ve been a good option even with the likes of Realme and Xiaomi on the market. But I guess Samsung prefers sellings its more expensive Galaxy A51 to force consumers to spend more. On the flip side, there’s a cheaper and better Samsung alternative to the Galaxy A31 — it’s the Galaxy M31. It packs 6000mAh battery, Super AMOLED display, 64MP quad-cameras with 4K recording, and a more capable Exynos 9611 chipset for only P13,990.

Samsung Galaxy A31 specs, price, availability in the Philippines