If you belong to the group of people not knowing the difference and similarities between the newly-announced Redmi Note 9, Redmi Note 9s, and Redmi Note 9 Pro, you’re in the right place. We will help you identify the key features you need to know before purchasing one of them, or if the Redmi Note 9 series is even the right phone for you.

Why pick the Redmi Note 9?

Redmi Note 9 is the cheapest phone in the pack. It only starts at P7,990 for the 3GB/64GB model while the 4GB/128GB sells for P9,990. What you’re basically getting is an IPS LCD FHD+ display that’s capable of 450 nits brightness. In other words, it can get really bright even under broad daylight and lets you stream high-quality content on YouTube, Netflix, and other streaming platforms.

Like the rest of the devices, there’s a large 5020mAh battery that supports 18W fast charging via USB-C. This phone can easily last up to two days under conservative use. And like the more expensive Redmi Note 9s, most of the main cameras are the same except for the macro lens which is slightly worse at 2MP. But for the rest, you’re getting the same 48MP main sensor, 8MP ultrawide, and 2MP depth. As for the hole-punch selfie camera, there’s a 13MP sensor that’s capable of video recording up to FHD@30fps.

With the Helio G85 chipset, Redmi Note 9 is the least capable of the three but performs very well for a budget gaming phone. You should be able to play the most popular games today, including COD Mobile, with minimal stutters and frame drops under medium settings. But due to the limitations of the chipset, video recording is also capped at FHD@30fps. There’s no option for 4K resolution.

When it comes to design, Redmi Note 9 is available in three colors — Forest Green, Midnight Grey, Polar White. The fingerprint scanner is found on the back, just below the cameras. Although you get splash-resistance here, the back of the device (including the frame) is actually made of polycarbonate material that looks like glass.

Why pick the Redmi Note 9s? 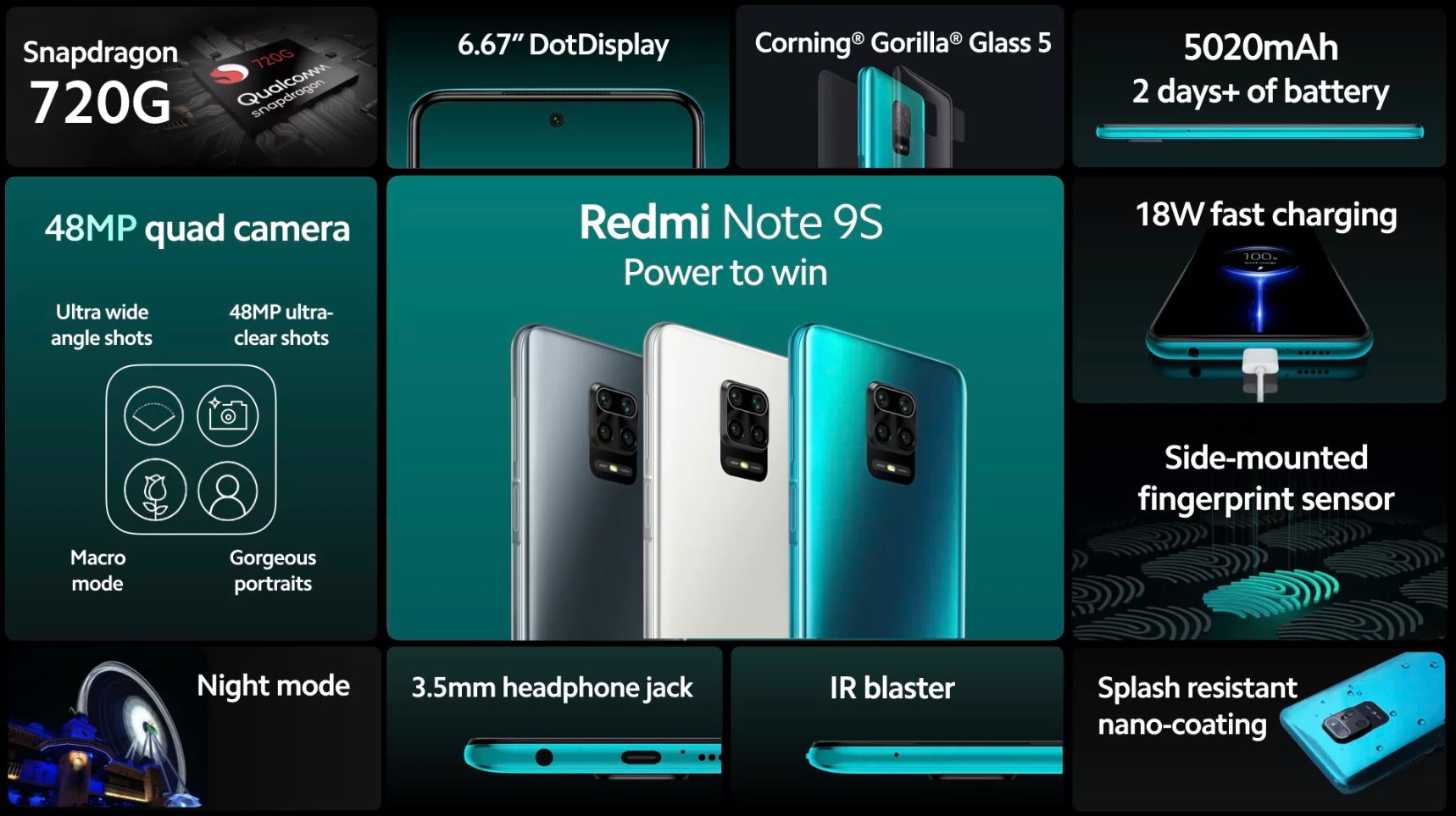 For Redmi Note 9s, you get 4GB/64GB by paying P10,490. The other model with 6GB/128GB retails for P11,990. Starting with the display, it’s now a bit bigger at 6.67″, however, it’s still the same FHD+ IPS LCD with Gorilla Glass 5. If you watch a lot of HDR-enabled videos, the screen can playback those for better quality. And while there’s still a hole-punch selfie camera, the position is now on the top-center and the sensor is now 16MP.

Camera-wise, you get the same 48MP quad-camera setup here but with a sharper 5MP macro lens. But since Redmi Note 9s is using a more efficient and faster Snapdragon 720g chipset, it gives the device the ability to record sharper videos at up to 4K@30fps. Additionally, support for electronic image stabilization (EIS) is present and you can record up to 120fps@1080p and 960fps@720p. What you also need to know is that Snapdragon chipsets usually have better Image Signal Processor(ISP) than MediaTek. To keep it simple, photo and video quality are better on the Redmi Note 9s even with the same technical spec sheet as the Redmi Note 9.

Moving onto the design, Redmi Note 9s’ splash-resistant body now features Gorilla Glass 5 backing along with polycarbonate framing. The fingerprint scanner is now on the side and also acts as a power button. As for the rest, you get the same features — 5020mAh battery, audio jack, and a dedicated microSD slot expansion. You can choose from Aurora Blue, Glacier White, Interstellar Gray.

Why pick the Redmi Note 9 Pro?

The most expensive out of the three is Redmi Note 9 Pro. It starts at P12,490 for the 6GB/64GB and goes up to P13,990 for the 6GB/128GB. Spec-wise, it resembles the Redmi Note 9s a lot; from the Snapdragon 720g to the selfie cameras, battery, and quad-cameras. However, the main sensor is now of 64MP which allows for crisper photo quality, and the charging rate is now at 30W. Other than that, you’re getting the same phone, well, except for the Tropical Green variant that has a two-tone finish on the back. But for the Glacier White and Interstellar Gray, they have the glossy finish.

We think that Redmi Note 9 is only worth purchasing if you’re going to strictly spend less than P8,000. If you want the 4GB/128GB model, you might as well save up P500 more for the Redmi Note 9s which gets you the same amount of RAM. We also think that the larger storage is worth the trade-off. After all, you’re getting more capable cameras and better performance. As for the Redmi Note 9 Pro, so long you have the money, either model is recommendable.