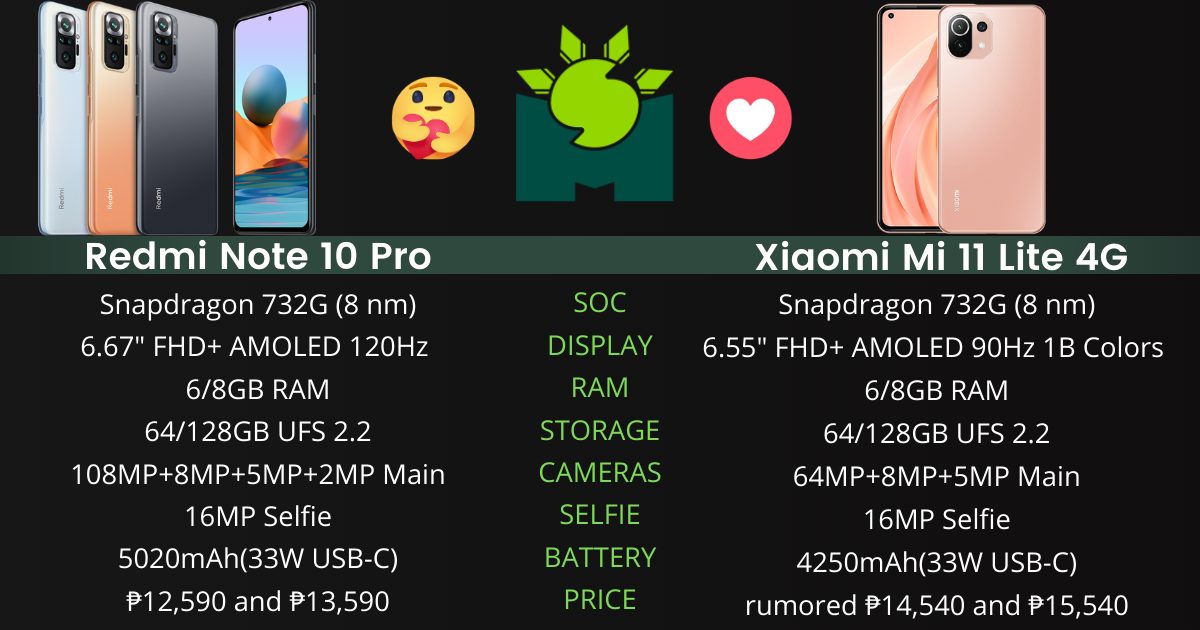 2021 is the year wherein AMOLED-based phones have become affordable and easier to purchase for most consumers. Compared with LCD, it’s a panel that offers a better contrast ratio, black level, and colorful, well, colors. It’s basically the easiest way to own a Samsung phone without buying a Samsung phone. Today, we have the Redmi Note 10 Pro and Xiaomi Mi 11 Lite competing at nearly the same price point. And despite the naming schemes, both devices are from Xiaomi. But if you’re looking for the best deal, let’s see how each stacks up when we compare them.

Which is the better buy between the Redmi Note 10 Pro and Xiaomi Mi 11 Lite?

Right off the bat, there are already differences in the way the two phones were constructed. The Note 10 Pro is the thick and heavy device, while the Mi 11 Lite is the thin sibling that offers a “premium” feel in the hands. And thanks to the ultra-thin profile, the whole design looks flat from front to back. However, the Note 10 Pro is slightly bigger in the display category and carries IP53 dust and splash resistance. The same can’t be said for the Mi 11 Lite, though. On the flip end, it comes in Black, Pink, and Blue colors with a frosted finish on the back for smudge-free usage. Although the Note 10 Pro also sports the same finish for the bronze and blue colors, the gray variant still offers a glossy finish.

Design-wise, the Mi 11 Lite looks better and newer, especially that it borrowed the design of Xiaomi’s flagship series, the Mi 11. And despite the absence of IP53, what matters to most consumers is the way the device looks, and the Mi 11 Lite surely leads in that category.

While Redmi Note 10 Pro is the bigger sibling with its 6.67″ display, the Mi 11 Lite isn’t that small at 6.55″ diagonal. For the most part, you’re looking at the same HDR10-capable AMOLED with Gorilla Glass 5 protection. However, each phone has its own unique offering. For starters, the Note 10 Pro is equipped with a 120Hz refresh rate, alongside 450 nits typical brightness and 1200 nits peak brightness in HDR. On the other end, the Mi 11 Lite is using a battery-conservative 90Hz refresh rate with 500 nits typical and 800 nits peak. Though lacking in two categories, Xiaomi claims that the phone can display up to 1 billion colors, meaning it’s an accurate panel.

We can’t tell right now if 1B color actually makes a difference when comparing AMOLED devices, but for now, we’re giving the win to the Note 10 Pro due to obvious reasons.

Both devices are using Snapdragon 732G chipset paired with 6/64GB and 8/128GB UFS 2.2. And since both, again, are running MIUI 12, you can expect the same user interface and jam-packed features of Xiaomi’s style of Android, and that includes the bloatware and ads. In 2021, the 732G isn’t exactly a powerhouse chip that can support the most intensive games right now, like Genshin Impact. However, it’s still more than enough to support all social apps without compromising speed. On top of that, it’s a power-efficient chipset, too. Where the two devices will differ is the ability to expand memory.

Nevertheless, the Note 10 Pro and Mi 11 Lite are equal in the performance department.

One of the biggest differences between the Note 10 Pro and the Mi 11 Lite is the camera, at least on paper. The Mi 11 Lite offers a triple-camera experience, featuring a 64MP wide, an 8MP ultrawide, and a 5MP macro lens. Although the Redmi Note 10 Pro dons a quad-camera setup, the addition of 2MP depth doesn’t really affect the camera quality that much. Where it really shines, though, is the use of a 108MP sensor. With it, you can capture incredibly detailed photos and the ability to crop in with little-to-no loss of quality. While you can also do that with the Mi 11 Lite, the result is not as good.

On the contrary, there’s not much to compare on the front since both devices are using 16MP sensors. Other than the placement of the selfie camera, you’re basically getting the same quality of the hardware.

Thanks to the better camera system, we’re giving the (camera) win to Redmi Note 10 Pro.

Sound-wise, both phones are using dual speakers to replicate a stereo experience — one south-firing and another top-front firing. While the Redmi Note 10 Pro lets you have the option to plug in a headphone jack, you can forget about that with the Mi 11 Lite. It also appears that there’s no AAC wireless codec support for either of the two, but both support 24-bit playback.

Despite being the heftier sibling, the Redmi Note 10 Pro made sure to put it to good use by packing a 5020mAh battery. It also supports 33W fast charging, which’s becoming a standard on Xiaomi phones. With it, you can go from 0-59% in just 30 minutes. As expected from the Mi 11 Lite, its thin profile can only house a respectable 4250mAh battery. It does support the same fast charging technology, so you may expect slightly faster top-ups.

Once again, the Redmi Note 10 Pro wins this one due to the fact that it can last longer in single charges.

For an AMOLED phone, some of you may be a bit surprised to see a side fingerprint scanner on both phones. It’s basically one of the decisions Xiaomi had to make to keep the price as low as possible, especially when chipset production is running low globally.

Now that’s out of the way, let’s talk about price.

Comparing their “sale” prices, the Redmi Note 10 Pro easily delivers the better value out of your money. It offers a faster and larger screen, more RAM, a headphone jack, a bigger battery, a dedicated micro SD slot, and a 108MP camera. While the Mi 11 Lite prioritizes style and design, that doesn’t mean that its 64MP quad-camera and 90Hz AMOLED display are bad per se. Although the thin profile comes with a price, the overall specs of the device are still competitive than other phones today.