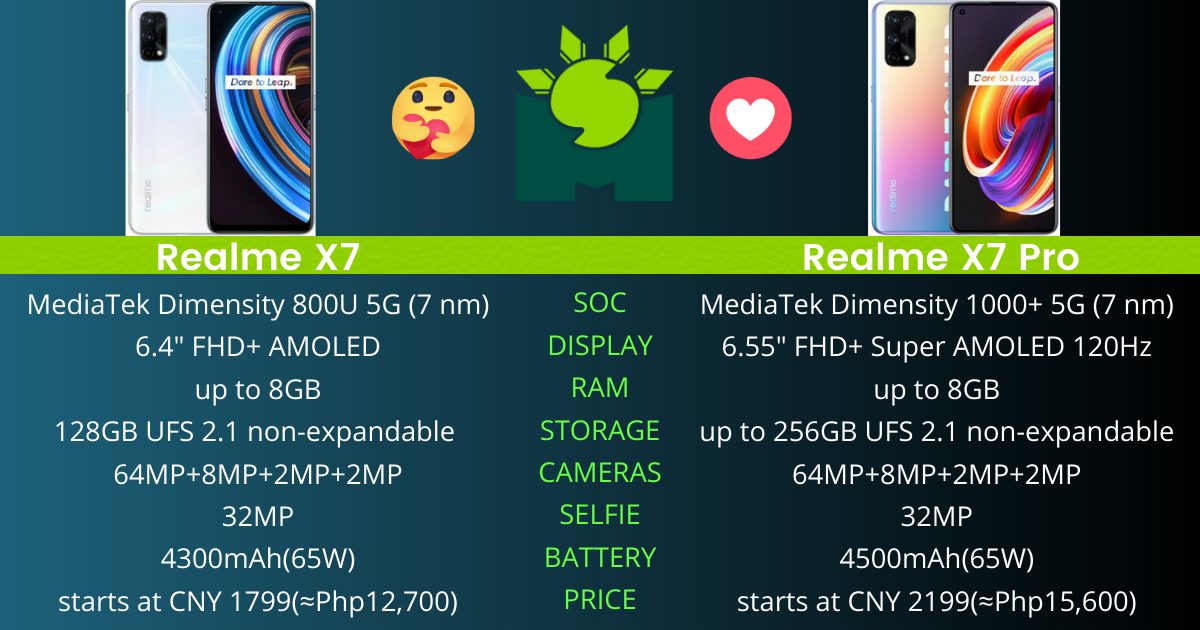 Just like that, Realme 6 Series feels like an old pair from yesteryear as the company announced the Realme X7 Series. Led by the X7 Pro that packs a faster and punchy screen, the X7 undercuts the competition with 5G for not a lot of money. If you’re confused about their similarities and differences, let us help you identify all of them in this comparison.

Which is the better buy between the Realme X7 and Realme X7 Pro?

With the Realme X7 Series, it’s a design shift that goes back to the single-color hue. As more and more brands out minimalist design elements, you can just expect the same thing for this new lineup. Well, except for the rainbow edition. Nearly similar to the OnePlus 8’s interstellar glow model, the back of the special edition shines in a pinkish, purplish hue. The biggest difference, however, is the added tagline of “DARE TO LEAP.” This design cue received mixed feedback from fans, but should you wish for a cleaner setup, you have to settle for the bland Blue and White variants. Either way, both X7 and X7 Pro are of all-polycarbonate build, allowing for lighter weight package. Neither went over 9mm in thickness, so expect a slimmer feel than most phones today. Build-wise, we’re looking at identical devices.

One of the biggest shifts that you can expect, assuming the X7 is the successor to the 6 Series, is the display. With the vanilla X7, it makes use of AMOLED in a 6.4″ diagonal size. Though protected by Gorilla Glass, the specific version wasn’t mentioned. As for the X7 Pro, it has everything a display nerd can wish for — Super AMOLED with FHD+ resolution and a speedy 120Hz refresh rate. Protection-wise, it’s using Gorilla Glass 5. And since both are using AMOLED, it paved the way for an under-screen fingerprint scanner. While we expect both displays to be better than the 6 Series, it’s the X7 Pro that will entice most buyers.

Dimensity 800U vs Dimensity 1000+ — Realme decided to go for all-MediaTek chipsets for the X7 Series, perhaps to make their price tags as attractive as possible. However, we’re glad to see Dimensity models instead of Helio as they are newer, more efficient, and feature 5G connection already. But when it comes to sheer numbers, the Dimensity 1000+ is the way to go here. It may be based on the same 7nm process node, but the octa-core CPU can go head-to-head with the Snapdragon 855, and the Mali-G77 MC9 is way more powerful than the Mali-G57 of Dimensity 800U. Speaking of, the 800U isn’t any slouch, either. The leaked Antutu benchmark shows that it’s as capable as the Snapdragon 765G.

So, what’s the catch here? Well, Realme had to remove the MicroSD slot for storage expansion, which means you have to live with at least 128GB until the lifespan of the device, or 256GB if you’re getting the X7 Pro.

Spec-wise, neither of the two has a clear camera advantage over the other. Both are packing a 64MP main sensor with ultrawide, depth, and macro as secondary lenses. Video recording even goes up to 4K, but the X7 Pro edges out its smaller sibling with 60fps in tow. In the real world, you can capture smooth-looking videos or slow-down the footage a little bit without stutters.

The same goes for the 32MP selfie sensor, albeit up to [email protected], suggesting slo-mo selfies. If there’s a difference between the two, that would be the post-processing from each’s ISP. Unfortunately, it requires testing the two devices side-by-side to see the real difference.

Another omitted feature to keep the price in check is the audio jack. Though we’re not that surprised for the X7 Pro, it’s actually a bit weird to include the X7, which costs significantly cheaper. As a result, you’re left with a single firing speaker on the vanilla version and stereo speakers on the Pro model.

There seem to be sufficient battery for the two devices — 4300mAh for the X7 and 4500mAh for the X7 Pro. Both even charge at an amazing rate — 65W — getting from 0 to 100% in a little over 30 minutes. But if you’re looking for the device with the longer screen time, expect that from the X7 due to the 60Hz refresh rate. Well, of course, unless you turn down the 120Hz display of the X7 Pro, but there’s really no reason to do that.

The following prices are converted from China’s currency, so expect Philippine prices to be higher, if not lower.

We can’t wait for Realme to release the X7 Series in the Philippines. Though there’s still no assurance whether or not that’ll happen, one thing is for sure, though — Realme 6 Series is due for an update. It’s a bit weird, however, that Realme X7 is missing a fast screen. We feel like Realme 6 Pro will replace the price point of Realme 6, and only the X7 Pro will launch for who knows how much. But that’s just us, so sound off in the comment section.