The Realme 5i and the Realme C3 does have a large 5000mah battery capacity, a decent powerful chipsets and a nice camera. Now we got a hands-on on both phones, which will win the title the budget king? Can Realme 5i defend its title? Or realme C3 will be the new titleholder? Let’s find out

Both are protected by Gorilla Glass 3 and has a plastic back and plastic frame. The physical buttons along with the audio modules and ports are at the same spot. They both got a lovely design which they called a sunrise design. When illuminated by the light it is visible and eye-catching. realme c3 only has a triple camera, the quad-camera of the realme 5i stands out. What’s missing on the realme c3? The ultrawide angle lens and some camera features.

Both phones have nearly identical specs in papers, they both have an IPS LCD panel on its 6.5inch screen, 20:9 screen ratio, and a max resolution of 720p. The realme C3 has a higher screen to body ratio of 89.9% compared to the realme 5i that has an 83.2% STB ratio. The quality of both screens are pretty much the same but the realme c3 got a higher brightness level compared to the 5i.

Although both have a 12MP main shooter there are some features that realme c3 is lacking, like the ultrawide lens, nightscape, 4k video capture, and a stabilization. but to compare, both have the same quality but the colors are more precise in the realme 5i because of its Camera AI. The dynamic range on both phones isn’t bad at all. If you turn on the hdr mode you will see a slight difference in the shadows, the highlights were reduced down to see more details and the colors are more saturated. 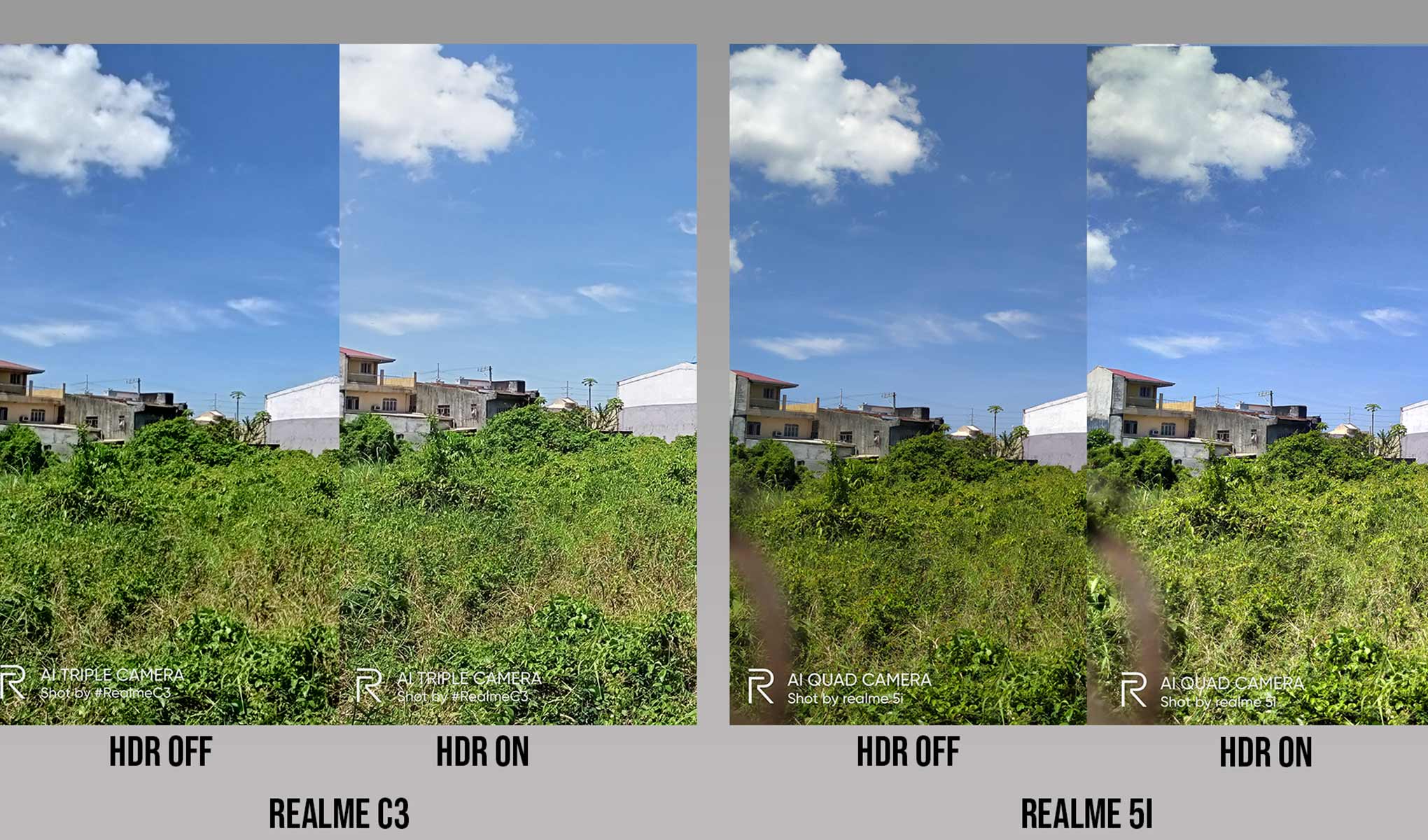 They both got nearly natural colors but realme 5i has more contrast than the c3, thus giving the photo more depth and true to life images.

In lowlight shots, there is a difference between the color and white balance in the scene, as I mentioned the Realme 5i got its Camera AI that automatically adjust the scene mode of the photo and making it’s white balance more natural look and feel.

Moving on to macro shots, I noticed that it has a spherical bokeh which is good and the details are sharp however both shots have different contrast and depth.

Carry on to the Ultrawide lens which realme C3 doesn’t have, the hdr handling is incredible the shadows and colors were enhanced.

Taking you to the zooms you can see that the realme C3 handles the color pretty well, the realme 5i’s Camera Ai is struggling on the scene whether it will choose a solid color mode or a natural color mode. either way, the photos of both phones are less grainy even at max zooms.

Switching to the front camera

realme 5i got a 8mp front camera while realme c3 only has a 5mp lens, however,  I like how the colors are processed on the realme C3 the skin tone is more natural although in terms of sharpness I’ll pick the realme 5i. You will notice deep blacks in the realme C3 resulting in loss of details in the dark parts of the photos.

Both phones can easily handle the bokeh effect in portrait mode but again the skin tones are less likely the same.

Turning on the HDR mode in the selfie shooter, you will see the main difference between the white balance and the colors of the skin tones. Realme C3 is more likely saturated and warmer compare to the realme 5i but the realme 5i is sharper.

Moving on to the video capture, realme 5i can offer up to 4k resolution video recording while c3 only shoots at 1080p 30fps. The realme 5i got a stabilization when shooting at 1080p both back and front. The two devices can shoot 120fps slow-motion but the resolution was reduced down to 720p. The realme 5i got a Nightscapes feature so you can take low light shots while realme c3 on the other hand, can shoot decent lowlight also, however, realme 5i wins in terms of camera features and flexibility.

Now let’s talk about the performance 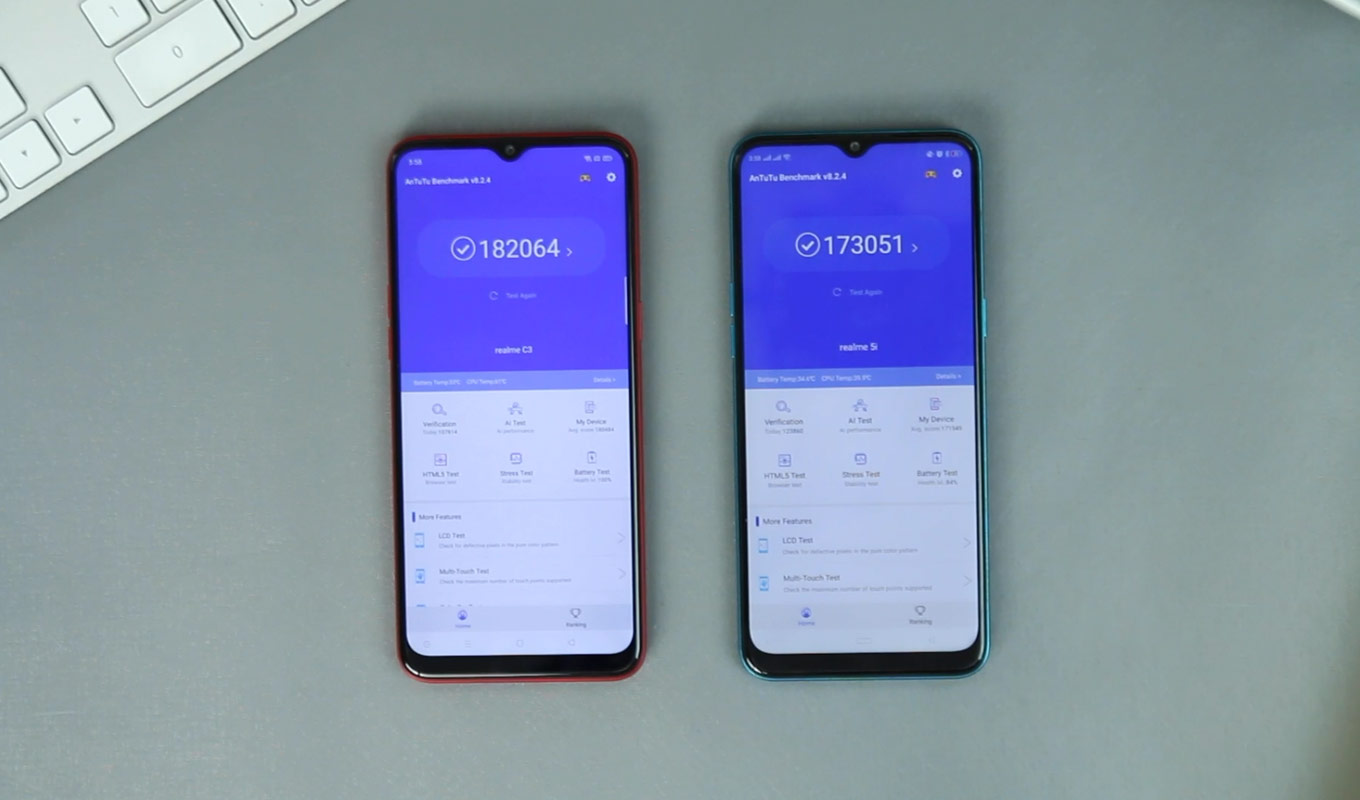 Both phones are pretty fast but we can feel the processing power of the realme C3 more. It offers smooth gameplay thanks to its Helio G70 processor. In Pubg, it is on high settings by default, playing games on both phones are good but in a sense, you can play smoothly with high graphics on realme c3. On the asphalt 9, if we try to max out our settings in realme 5i there’s a lot of frame drops and stuttering, especially when there are special effects playing in the scenes, realme c3, on the other hand, is running smoothly even at max settings. Clearly the realme c3 is the king of gaming between the two.

In terms of battery capacity, both have a large 5000mah battery that can be charged with a 10w power brick. It has almost the same charging time of 3hrs. and I can say both phones are pretty solid in their battery capacity, you can play all day long.

Stereo speakers on the realme 5i produce less sound compare to realme c3 but overall sound qualities of both phones are decent and loud.

Watch: REALME C3 VS REALME 5i – Which one you should buy?

Since I am a hardcore gamer that loves camera flexibility like the DSLR, for me it’s pretty hard to choose what I’m going to use. Because these phones specs are balanced, they either lacking something but powerful in that category, or vise versa. If you are a hardcore gamer I recommend you get the realme C3, on the other hand, If you love creativity, the quad-camera of realme 5i is the best option for you. But at the end of the day, they are both a midrange budget phones and they are affordable.