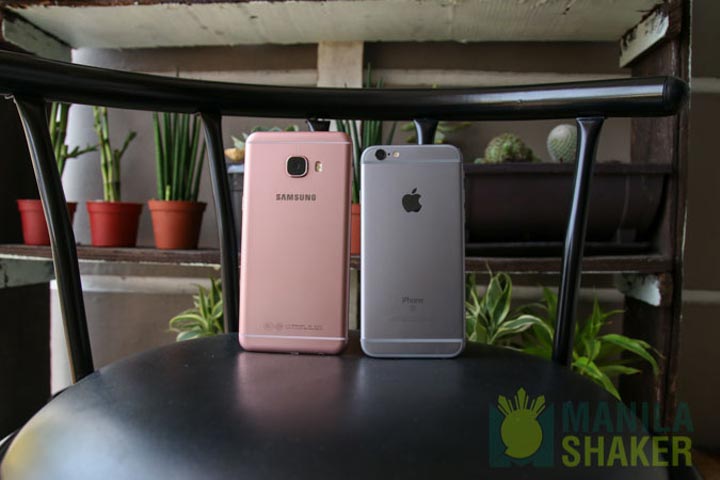 The Samsung Galaxy C5 is the latest mid-ranger sharing familiarities to the 1-year-old iPhone 6s in terms of design. The former is also a fraction of the cost of the latter. But given how technology has evolved in the past year, how far did the Android mid-ranger evolve? We compared the two to see if there’s really a significant difference.

No doubt that the Samsung Galaxy C5 is a mixed of the metal iPhone 6s, HTC, and the OnePLus 3. The form factor such as the curves and ports are more apparent as to the iPhone 6s plus the rose gold color means Samsung is targeting a similar market.

The Galaxy C5 is longer but thinner than the iPhone 6s. It also sports the same aluminum build and curved glass but has more base storage, LED notification, and options for dual SIM or microSD card expansion.

The fingerprint sensor on each is embedded on the home button. On the Galaxy C5, it is flanked by two back-lit capacitive keys. The speed is relatively close, fast and accurate on both sides.

If there’s really an Android phone that been close as much to iPhone experience in terms of build and design, it’s definitely the Galaxy C5.

The 5.2-inch full HD Super AMOLED of the Galaxy C5 is slightly brighter and noticeably more saturated, thanks to the nature of AMOLED being over vivid yet with inky black level. The iPhone’s 4.7-inch is dwarfed by the C5, but the quality on it is still pretty good with bright and contrasty output for an LCD.

The 16MP f1.9 of the Samsung Galaxy C5 produces saturated photos but the noise level is more apparent. The details are also close to the iPhone 6s’s 12MP f2.2. However, looking closely, the iPhone 6s has the more naturalistic color rendering and detail preservation.

On selfie, the Galaxy C5 beats the iPhone 6s in exposure and wide angle with its 8MP f1.9 front-facing camera. The iPhone 6s takes natural portrait photos but the narrower angle limits the subject area for every shot.

Both shoot 1080p video and lack Optical Stabilization. The quality and focusing are close with iPhone 6s edging to a more neutral side and C5 on vivid color reproduction.

Let’s know which camera do you prefer.

In performance and benchmark, the difference is big enough for iPhone 6s to smoke out the Galaxy C5 in benchmark tests while actual speed test is expectedly on iPhone side. The Galaxy C5 does the job especially the basic stuff, but its hardware limits to handle graphic intensive games in high settings like the NBA 2K16.

Powering the Galaxy C5 is a measly 2600mAh battery while the iPhone 6s has a much smaller 1715mAh. Each battery cell equates an average life with up to 3 hours screen on time.

Charging the Galaxy C5, however, is much faster using its fast adaptive charging and only takes under 1 hour and 30 minutes to fill its battery. The iPhone 6s does not support fast charging and is disappointingly very slow to charge despite the small battery capacity.

Speaker and audio: Expensive but standard

There’s no high-res audio feature on each despite the expensive price of the iPhone 6s. The mono speaker on iPhone 6s performs louder and crisper compared to the Galaxy C5’s middling speaker.

With almost a year gap in technology, today’s mid-ranger like the Samsung Galaxy C5 does the job pretty well as to the flagship iPhone 6s of last year. For almost the half of the price of the iPhone 6s, the C5 with 64GB storage at P18k to 19k or roughly $400 is really worth checking out over the P36k or $780 price of iPhone 6s with 64GB storage.

Let’s know which is smarter between settling for an expensive flagship phone of last year or buying a mid-ranger that still does the job for most of the time?