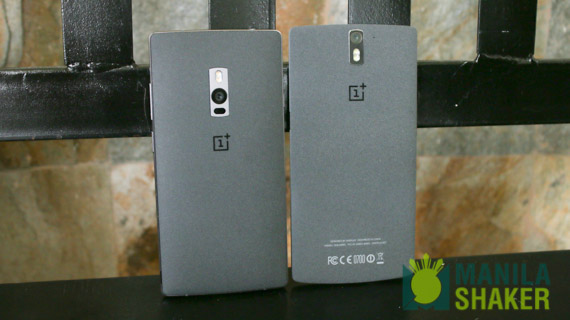 On our unboxing review for OnePlus 2, we had a quick comparison on both OnePlus phones, we highlighted many similarities on both phones. Namely, its sandstone black handset theme, which shows off a musculine and unique look for both OnePlus phones.

An easily seen difference in terms of features is the OnePlus 2’s new metal framing, a fingerprint sensor and an alert toggle. Features that were not present on OnePlus One.

Overall, the changes in design and exterior features were pretty minor, yet is considerably an upgrade from the OnePlus One’s original design.

The Winner: OnePlus 2 for its upgrades in design and features

For display, the same 5.5-inch 1080p LTPS display feature can be found on the OnePlus 2, image quality remained the same for the OnePlus 2. Although, the configured screen for OnePlus 2 was a little bit warmer.

Viewing angles for both phones are similar and in excellent quality.

The Winner: Tie for similar display specifications and quality

13-megapixel camera resolution is retained for the OnePlus 2, but shots taken with it are more sharper and brighter in comparison with the OnePlus One.

The downside on OnePlus 2’s camera performance is its more narrow angle. despite of this, OnePlus 2 was able to take the camera round.

Both phones had minor differences in terms of white balance accuracy and warmth on its front cameras.

The Winner: OnePlus 2 for still image

Video brightness for the OnePlus 2 is much more higher in par with the OnePlus One, because of its HDR (high dynamic range) capability.

The Winner: OnePlus 2 for video performance

On the boot up speed test conducted on the two phones, the OnePlus One showed faster boot up loading speed, surpassing the OnePlus 2.

On the last conducted benchmark test using GeekBench 3, bench mark rating for both phones were balanced.

For the actual speed test, OnePlus 2′s application loading speed and browser loading speed was far better in comparison to the OnePlus One’s, both phones were excellent in terms of loading speed capacity though.

An obvious thing to notice while comparing both phone’s speaker quality is that OnePlus 2’s audio delivery is more clear and powerful in par with the OnePlus One’s. For audio volume, the audio control is slightly more balanced on the OnePlus 2.

The winner: One Plus 2 for excellent audio volume and clear and powerful sound delivery.

The OnePlus 2 and OnePlus One have clear and obvious differences and similarities. Both phones have their own specific strengths and weaknesses that will set them apart, it’ll depend on your preference of use on what phone will you pick.

Please leave your comments and suggestions down below, we highly appreciate feedbacks.

Also, check out the video version of this ultimate comparison