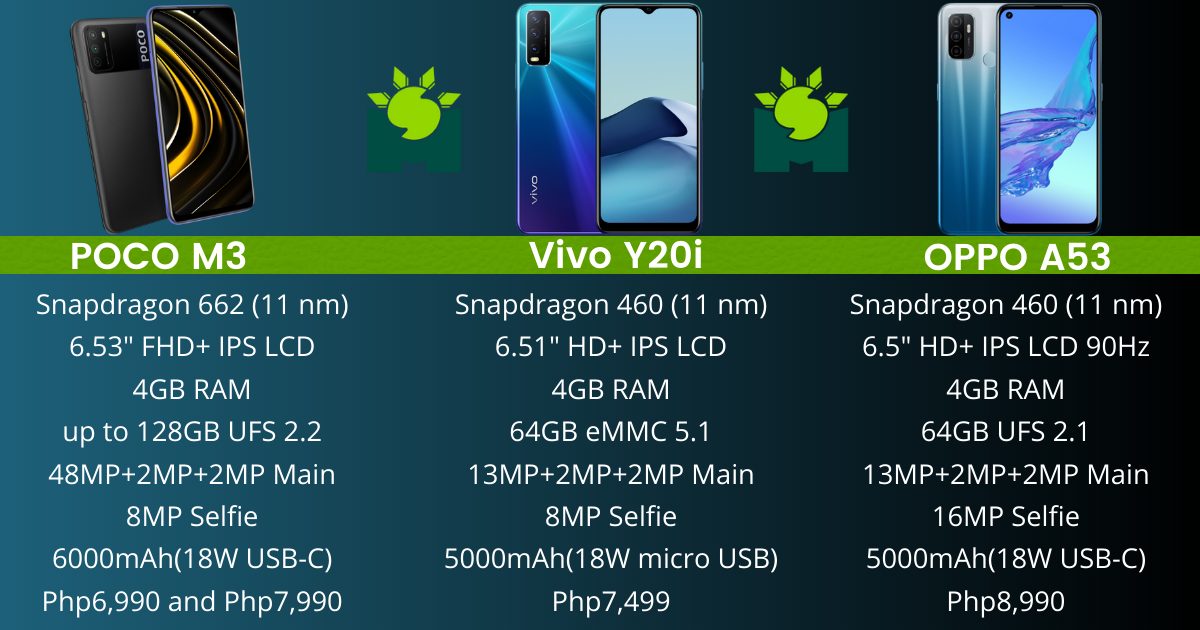 Budget phones don’t usually offer a lot other than value. Although you might think that you’re saving money by purchasing a budget phone, you might actually be doing the opposite if you’re not keen enough on what you’re purchasing.

Perhaps, you’ve seen the newly-released POCO M3 and are curious how it compares against Vivo Y20i and OPPO A53 — two of the most popular budget handsets at the moment. In this comparison, we’ll make sure you won’t buy the wrong one(s).

What Are the Similarities?

At a glance, the three devices look awfully similar when it comes to the triple-rear cameras as well as screen sizes. Though the A53 has a capacitive fingerprint scanner on the back, the other two devices have it embedded on their power button.

Neither of which is small by today’s standards, thanks to the 6.5″ diagonal IPS LCDs. However, the A53 looks a bit more outdated upfront with its pinhole cutout for the selfie camera. But then again, all three are packing single selfie shooters.

If you think you’ll easily run out of storage after snapping a few photos, it’s nice to know that all of them are capable of microSD card expansion through their dedicated slots.

How Vivo Y20i is Better Than The Rest?

Vivo Y20i is relatively the oldest of the bunch, having released this late September. While the teardrop notch won’t win any awards, the back panel resembles the expensive mid-range devices out there. The material is made of plastic but shines in a glass-like coating. Unfortunately, you can only get the Blue or White variant locally.

Spec-wise, the Y20i the least capable of the three — it features Snapdragon 460 and a triple-camera setup of 13MP wide + 2MP macro + 2MP depth. There’s an accompanying 8MP on the front. And while you do have a massive 5000mAh battery that can surely last a day, you have to settle for a micro USB plug.

Vivo Y20i doesn’t have anything special that it offers when pitted against the M3 and A53, other than the entirely subjective design.

How OPPO A53 is Better Than The Rest?

OPPO A52 is nearly the same as Vivo Y20i but with a few touches to separate itself.

For starters, the selfie camera is housed inside a pinhole cutout that makes the device looks on-trend. What’s more, you’re now looking at a 16MP selfie camera, which is twice better (on paper) than the rest of the two devices. Two notable improvements are the use of USB-C for the charging port and data transmission and a stereo speaker setup.

While the memory combo of the A53 is also 4GB/64GB, the device actually performs faster than the Y20i, thanks to the UFS 2.1 storage. By the numbers, that’s up to four times better than the eMMC 5.1 of Y20i.

Speaking of fast, OPPO A53 is the only phone with a fast 90Hz refresh rate. It’s a feature that improves the animation and transition of the user interface by 50 percent. At Php8,990, it’s already the cheapest phone with the said feature. However, some of you may be put off by the 720p+ resolution.

How POCO M3 is Better Than The Rest?

According to POCO, the M3 is a phone that offers “more than you expect.” Whether that’s true or not, we’re about to find out.

Spec-wise, POCO M3 offers the best on-paper features, such as a standard 48MP sensor, hi-res audio playback, an FHD+ display, and a huge 6000mAh battery. Frankly speaking, nothing comes close to this device when offering the same set of features.

Sure, there’s no 90Hz here, but most consumers looking for a budget phone don’t pay attention to that. We feel like these people prioritize better screen quality, which the FHD+ IPS LCD offers, without taxing the battery. And since we’ve talked about it, the 6000mAh battery is, by far, the biggest capacity on a device. It means you can easily get up to two days worth of usage or maybe three if you’re pushing it.

While POCO is advertising dual-speakers on the M3, we can’t say that it’s better than the stereo speakers of the A53 because it’s simply isn’t. As per testing, the other speaker within the earpiece is barely audible. But where the M3 (kinda) beats the two devices is the chipset.

At the core of the M3 is the Snapdragon 662, a slightly optimized version of 665. It’s not a chipset made for gaming, but if you’re a casual user, the 662 is more than enough to accommodate your needs. In fact, the performance of it doesn’t veer away that much from the 460. The most noticeable improvement of the chipset is the ability to record up to 4K resolution, but even POCO decided not to include the feature for some reason.

Before we forget, POCO M3 has the most unique design out of three. Not only the back comes in a leather-like texture, but the camera module also looks like no other device. And for a 6000mAh phone, the M3 is surprisingly light and thin than expected.

Vivo Y20i is retailing for Php7,499, and that price barely goes down during sales. Although it has an attractive design, the device is the slowest and least capable among the three.

On the other end, you can spend Php8,990 for OPPO A53 that gets you a significantly faster experience. Most games are only playable at best, but the 90Hz will make you feel that you bought a more expensive device. The only thing that’s keeping us from recommending it is the price. There are better alternatives out there when your budget is near Php10,000.

With or without the discounts, POCO M3 still significantly beats the two devices when it comes to value.