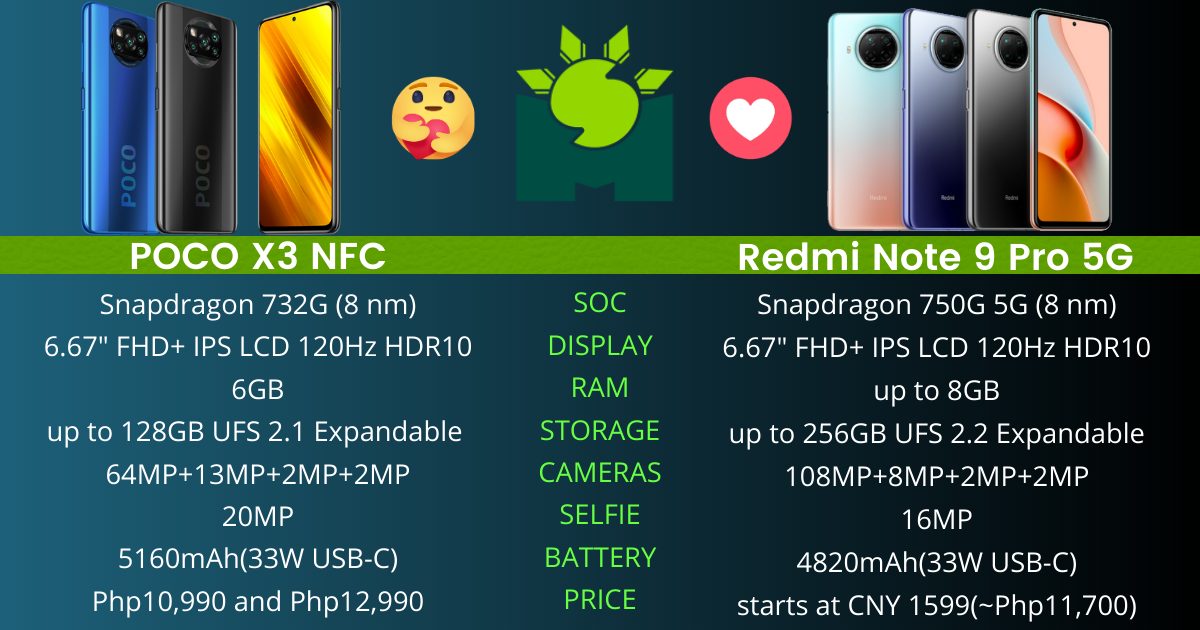 For a few months, POCO X3 NFC was the best bang-for-the-buck device that you could buy. But with the emergence of Redmi Note 9 Pro 5G, the (kinda) successor to the highly successful Redmi Note 9 Series, Xiaomi’s first sub-brand just took the title for itself. That said, what kind of upgrades are you getting, and is it worth waiting for the device despite the unlikeliness of a global release?

Which is the better buy between the Redmi Note 9 Pro 5G and POCO X3 NFC?

While the overall footprint of the Redmi Note 9 Pro 5G is more or less the same, some slight changes make the new device more polished.

First, the glass panel on the back gets rid of the huge branding. Second, the camera hump appears to be leveled with the circular cutout while making the quad-camera setup less obtrusive and annoying. Third, the weight may be the same, but the thickness is now down from 9mm to 9.4mm.

We love how minimal the look of the Redmi Note 9 Pro 5G in gray and blue colors, with the red/mint adding a bit of an attraction for those who’re bold to wear it. We feel like this is what the POCO X3 NFC should’ve been from the start. With that in mind, we’re giving this to the Redmi device.

Fortunately, the front panel looks almost entirely the same — including the centered-pinhole selfie camera. But apparently, the Redmi Note 9 Pro 5G has a smaller 16MP sensor than the 20MP on the X3 NFC. In exchange, there’s now EIS when taking selfie videos.

The difference will basically come down to how well MIUI handles the high refresh rate on the new 5G Snapdragon chipset; thus, making the two devices tied in the display category.

With the Snapdragon 750G, the overall performance is almost on-par with the 765G. Versus the 732G on the X3 NFC, there’s at least 10% faster GPU perf and up to 20% faster CPU perf. The chipset also lets 120fps-enabled games to be compatible with it. But outside processing perf, the biggest upgrade is the addition of a built-in 5G modem.

The X52 modem inside the 750G allows for, more or less, up to 200Mbps downlink. Do take note that the Redmi Note 9 Pro 5G is only capable of single-SIM 5G standby, unlike the Redmi Note 9 5G with Dimensity 800U chip.

Lastly, there’s more RAM capacity for the Redmi Note 9 Pro 5G, maxing out at 8GB, up to 256GB storage, and UFS 2.2 storage has slightly faster writing speeds than UFS 2.1 on the X3 NFC.

The Redmi Note 9 Pro 5G is now using Samsung’s HM2 108MP sensor that’s also found on the Galaxy S20 Ultra, albeit in smaller pixel size. But, the pixel size alone is already a big boost in detail quality and low-light capability versus the 64MP on the X3 NFC. The caveat — it’s a Samsung sensor. The X3 NFC, on the other end, is using a Sony sensor, which is widely superior to Samsung sensors. It’s going to be interesting to see how well a massive sensor fair against a well-optimized one like Sony’s. Still, no 8K videos, though.

For now, we’re giving the technical advantage to the Redmi Note 9 Pro 5G.

We’re assuming that the Redmi Note 9 Pro 5G is also using the same stereo speakers on the X3 NFC. And fortunately for the former device, there’s still a headphone jack. We just hope that Xiaomi was able to fix the vibrating back panel of the X3 NFC.

The battery capacity is, perhaps, the most significant downgrade when coming from the X3 NFC. From 5160mAh — it’s now only 4820mAh. To be fair, that’s still a large battery for an android device.

It’s a different story, though, when it comes to charging speeds as we’re looking at the same 33W fast charger. We just expect the Redmi Note 9 Pro 5G to top up a little bit faster due to the smaller capacity.

This is the only category that POCO X3 NFC has won in this comparison.

It’s impressive to see Xiaomi one-up the best available mid-range phone yet while keeping the price incredibly competitive. Though they are prices from China, we rarely see the company go overboard with global prices. That said, the only thing that’s keeping us from getting our hands on the Redmi Note 9 Pro 5G is its availability.

During the event, Xiaomi didn’t say a thing about a potential global release, aside from the fact that there are no plans to do so (yet). And with the blurring lines between POCO and Xiaomi, markets where the presence of the two is appreciated — such as the Philippines — make it harder for us to predict the devices’ arrival.

If you own a POCO X3 NFC, there’s no reason for you to upgrade to the Redmi Note 9 Pro 5G, simply because 5G coverage is scarce. While the 108MP camera is an awesome upgrade, it’s better to wait for reviews if there is indeed a massive difference. But if you have yet to purchase the device, we advise you to hold out a little longer for the 5G Redmi device.