Asus is looking to launch the newest addition to their Zenfone series of handsets, the Zenfone 3 and like its predecessor, Zenfone 2, the device might carry more alterations under the same brand name. So far, a few rumours say that these new Zenfone 3 handsets will see the light of day in May or June though this is yet to be confirmed.

Two of the said possible Zenfone 3 handsets found themselves in a GFXBench benchmark tests, known only through their model numbers. With that, though, certain specs were seen altogether, with the first Asus Z010DD sporting a 5.9-inch 720p HD display, with a 12 or 13MP rear shooter and 5MP selfie shooter, as well as a Snapdragon 5 chip, 3GB of RAM, 32GB of ROM and Android 6.0 Marshmallow. 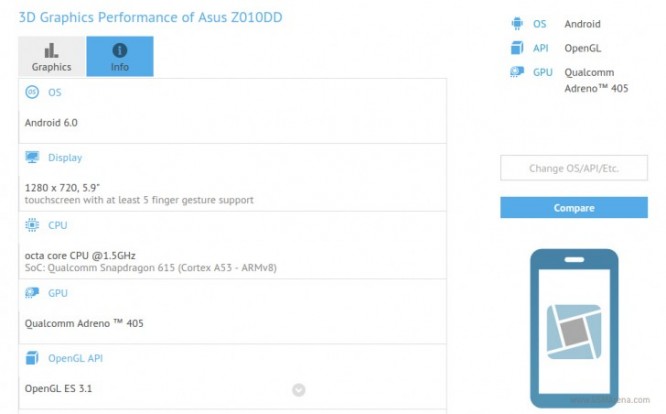 The second handset sports a 5.5-inch 1080p FHD display, Snapdragon 650 chip, 3GB of RAM, 32GB of ROM and Android 6.0 Marshmallow. Despite being revealed as unofficial Asus handsets, we can’t confirm if these are indeed the Zenfone 3 lineup, in the flesh, so for now, we just have to wait for the official unveiling of the new Zenfone 3 lineup to find out.