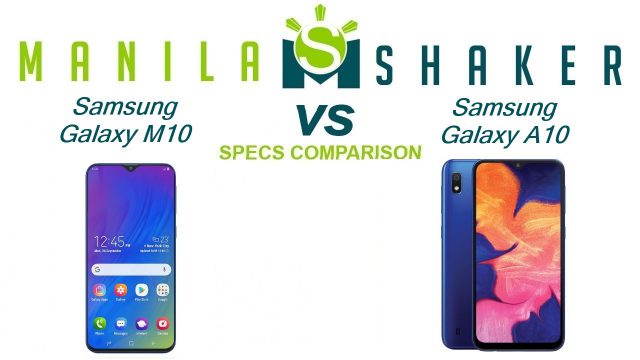 There’s no stopping Samsung from releasing their latest (and suited) budget phones for 2019. Veering away from the slightly overpriced budget phones, the South Korean finally realized the market that they are losing hence the release of the Galaxy M10 and Galaxy A10. With both budget devices battling at Php6k category, which is the right Infinity-V phone for you?

Advantages of Galaxy A10

Which is a better buy between the Samsung Galaxy M10 and Galaxy A10?

You won’t be having that “premium” feel in the hands with both the Galaxy M10 and A10 due to their plastic bodies but at least the display looks good with their respective thin bezels — with the former having a slightly thinner chin bezel. Both are available in Blue and Black colors but the A10 can be had in Red if that’s your fancy.

Moving to the display, images will look better on the Galaxy A10 thanks to its IPS LCD panel as opposed to the old TFT panel of the M10. The story continues for performance.

The Galaxy A10 has a slightly faster Exynos 7884 mobile processor and runs already Android 9.0 Pie with One UI out of the box.

As for the camera, the Galaxy M10 wins this round with its dual 13MP + 5MP main sensor while the 5MP selfie sensor of both is tied on paper.

The rest stays the same with the audio jack, back-firing speakers, micro USB 2.0 port, and a generous 3400mAh battery.

Now for their prices. The Samsung Galaxy M10 is estimated to arrive for Php5,900 while the Galaxy A10 was recently released in India for $120 or more than Php6,000 when directly converted. The only advantage of the M10 is its dual main camera while the A10 packs in slightly better overall specs for almost the same price thus making it the favored phone of this comparison.