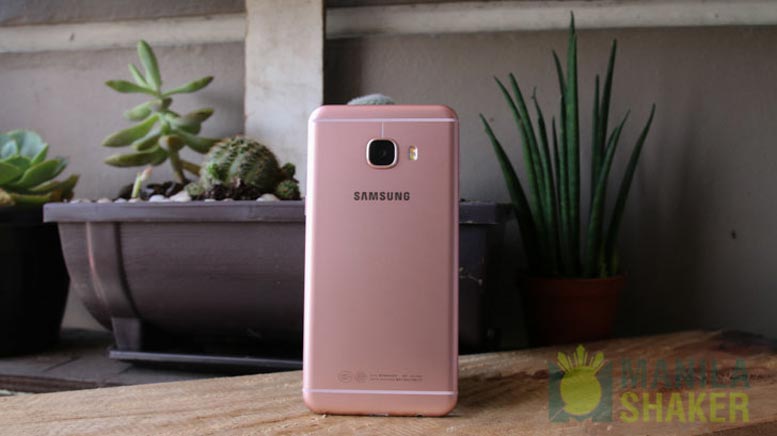 Samsung Galaxy C5 is a new mid-ranger officially launched at P17,990 or $390 price and sits between the Galaxy A and Galaxy J series 6 or the 2016 models. It sports a full metal design and resembles like iPhone 6s and HTC One. With a mid-range specs and features, what does it offer aside from the full metal design over its competitors? Let’s find out in our full review and in-depth look of Samsung Galaxy C5.

The box includes the typical set of Samsung accessories and gears like the 2A Fast Adaptive wall charger, manuals and SIM ejector tool, USB data cable, and stereo headset. You can check the full unboxing and hands-on on a separate post.

Dominated by an aluminum body and curved glass up front, the Samsung Galaxy C5 is the first Android smartphone of the company to bring the all-metal design since the first Galaxy S was launched.

The rounded form and highlighted antenna lines suggest the device was inspired by either an iPhone 6s or an HTC One. Somehow there are a few physical touches that make it unique like the centered and protruding camera.

Up front is a curved glass with unknown scratch-resistant protection. Down the screen is a home button embedded with a snappy fingerprint scanner. Flanking the home button is the standard backlit capacitive keys. The earpiece on top is accented with the primary color variant which is Rose Gold or Pink hue in this case. Other color options include the metallic silver, gray, and gold.

Married by an LED notification light, this is the first time we see the feature outside the high-end Galaxy S lineup.

The right side houses the power and a lock key and opposite to it are the volume rocker–all are made from metal cutouts. Only one variant is launched which is the hybrid model with options between a 2nd nano SIM card or microSD memory card.

The thinness and solid build of the device make our handling experience great. The rounded corners do not dig into the hands. Additionally, the weight is perfect although mileage may vary.

The 5.2-inch FHD 1080p Super AMOLED makes a comeback after being first seen in Samsung Galaxy A5 2016 model. Unexpectedly, the same quality is present here with really good brightness level and sunlight legibility outdoors. The colors pop out while the sharpness remains impressive for a mid-ranger.

The 2.5D curved screen provides smoother touch experience. On top of it is unknown scratch-resistant protection. For a mid-ranger, the vivid and bright screen of the Galaxy C5 is more than enough.

Camera in still, selfie, and video

The Samsung Galaxy C5 comes equipped with a 16MP f1.9 main camera and 8MP f1.9 selfie front-facing snapper. This dual-camera setup is the same to the latest Galaxy A9 Pro.

In terms of quality, the daylight shooting has slightly been improved over the 13MP shooters from the Galaxy J and A series 6. The extra megapixels produces a bit sharper detail preservation while keeping the saturated colors complete.

The night shooting tells otherwise as photos taken in low light are underexposed and blurry. The lack of Optical Image Stabilization is the one to be blamed here.

For the selfie shooting, the oversharpened and over brightened quality are still present.

Running on the latest TouchWiz on top of Android 6.0 Marshmallow OS, the new UI flaunts a few visible changes like the simplified drop-down menu and the option to hid the app launcher. Other than that most changes are found behind in the system covering security to battery optimization.

Our unit came with custom ROM as there’s no global variant available yet aside from China. All Google essentials work fine like the Play Store app and other services.

Rocking with a Qualcomm Snapdragon 617 octa-core chip and 4GB RAM, the Galaxy C5 handles everyday tasks fluidly with occasional hiccups. It only lags in playing graphic-intensive games such as the NBA 2K16 in the highest level of graphic settings. You’ll need to set the graphics in low level in order to play the game smoothly.

The biggest let down on this is the battery life. It was a surprise for Samsung to throw a 2600mAh battery cell whereas the Galaxy J5 and Galaxy A5 2016 pack larger cells at 3100mAh and 2900mAh, respectively. The smaller battery cell results to convincingly average battery life with up to 3 hours screen on time on moderate usage.

The 2A Fast Adaptive charger supports charging the device from 0% to a 100% in just less than 1 hour and 30 minutes while a minute charge could fill up to 20% battery life.

Like the older Galaxy A5 2016, the speaker is positioned at the bottom. Audio quality is middling with average volume and clarity. The addition of the FM Radio makes up for the lack of high-res audio feature like 24bit DAC amp.

The arrival of the Samsung Galaxy C5 means the company is creating another option between the Galaxy A and J series. As for the device, we really like the Galaxy C5. It’s attractive and solid despite the familiarity in design. The camera is not as good as the flagship Galaxy S7 but at least it does the job. The internal hardware is the biggest future proofing here which we would like to see on upcoming Samsung devices as well.

So what’s our verdict? With a P17,990 or $390 price, we think the overall package is worth it especially if you find the new metal design appealing than the plastic-dominated Galaxy J5 and thicker Galaxy A5. Undoubtedly, the Galaxy C5 is a better Android option with a complete package available in the market.