“The right channel strategies, effective marketing and good value-for-money products across all price bands helped realme defy the market decline,” said Research Analyst, Abhilash Kumar regarding Realme’s recent success in key South East Asian markets despite the on-going coronavirus pandemic. According to Counterpoint Research, the yellow-clad company grew the fastest in Q2 of 2020 with 141% YoY despite the declining global market. With eight key markets having Realme within their top five brands, the Philippines is where it’s strongest — settling for the second place.

Thanks to a 97% QoQ, Realme Philippines overtook Xiaomi, Samsung, and sibling-company OPPO to be the second most popular smartphone brand in the country. It’s a significant jump compared to its fifth place last quarter. In Singapore, Indonesia, Vietnam, and Myanmar, the company ranked fifth place. In Thailand, settling for a fourth-place, Realme is well-known as its 5G innovator, with a 43% market share of the 5G market. In Cambodia and Malaysia, they ranked fourth and third, respectively.

Other than SEA, Realme also thrived in Asia Pacific markets such as Bangladesh, Australia, Taiwan, and Pakistan. 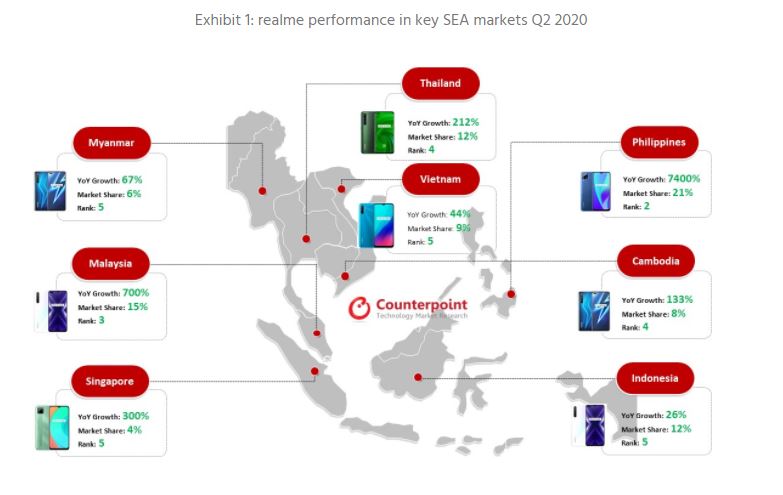 It’s not hard to see why Realme is considered the fastest-growing smartphone brand for some time now. Aside from releasing affordable products, the company also releases new phones every three and six months. Nearly every refresh, their products get sold out within hours.

READ: 11 Reasons Why the Galaxy Note 20 is Already a Failure