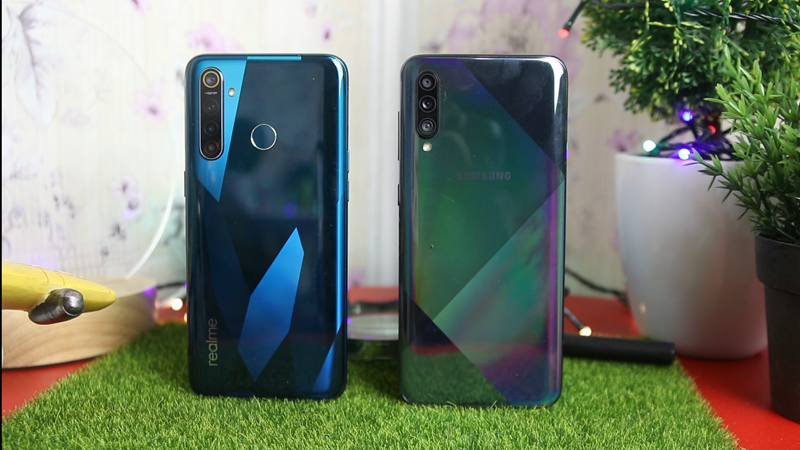 READ: Samsung Galaxy A50s Review – Back to Square One 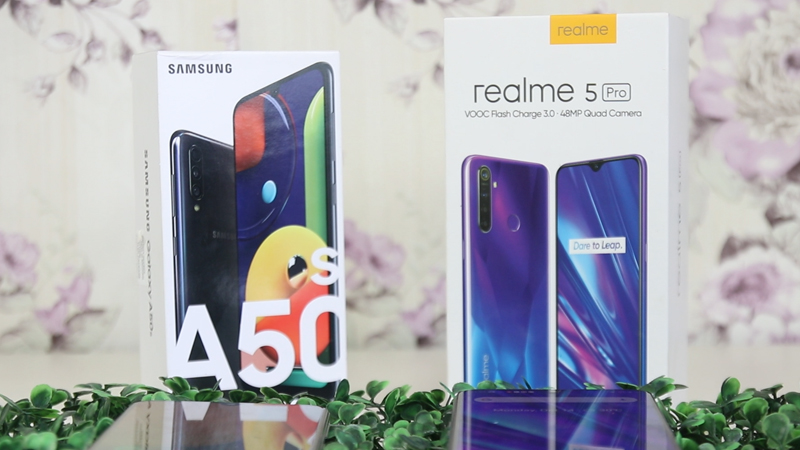 Starting from the back, Realme 5 Pro has already taken the lead with its Nanometer Holographic design. It’s more striking than the refreshed pattern of the A50s. Realme also has added the advantage of surviving accidental splashes, thanks to its splash-resistant body. But even with the better looks, the A50s feels better in the hands. That’s because it’s thinner and lighter in comparison. Using the A50s means comfortably using it for a longer period, whether it’s gaming, watching, or scrolling.

If comfort doesn’t matter to you because both phones require two hands to be used properly, Realme 5 Pro makes it easier to unlock the device due to its fingerprint scanner on the back. As for A50s, it’s still using that unpolished under-screen scanner.

Pure aesthetics can only go so far, but Realme 5 Pro isn’t that. As much as we love how the A50s feels during our entire usage, we still believe that splash resistant is more important.

Realme 5 Pro wins this round.

While both are sporting 1080p resolution with teardrop notches, there’s a perceivable difference in color reproduction. Realme is rocking an IPS LCD panel that delivers natural colors and bright output, Samsung’s Super AMOLED is noticeably more vibrant in colors with deep black colors. You also should know that Realme 5 Pro clocks in at 6.3″ and A50s at 6.4″. While the difference is negligible, the bezels are not. Samsung has a thicker chin bezel but the surrounding bezels are thinner than Realme’s. As for the notches, well, you know how we feel about them.

Most people won’t have any problem with Realme 5 Pro’s IPS LCD, that is until you compare it with a Super AMOLED panel.

That said, the A50s is taking this one.

With these two mid-range phones, we’re looking at least three main cameras on each of them. Both are using 48MP Sony sensors, 8MP ultrawide lenses, and 2MP depth optics. Realme 5 Pro completes the quad-camera experience with a 2MP macro of its own.

Thanks to the massive sensors, detail quality isn’t lacking. In one of our landscape shots during mid-day, the A50s exposes highlights a bit more for a more vibrant look. Taking a close-up shot of fruit, the A50s has a sharper-looking image due to the colder and less bright tone. On the other end, Realme 5 Pro delivered a more pleasing shot but with chromatic aberration occurring around the blurred post. Due to post-processing, at times, the A50s delivers blue-tinted photos.

In low-light situations, while both are capable of delivering usable photos, we were more impressed with the way Realme 5 Pro handled detail preservation, noise handling, and color reproduction.

Going ultrawide, we find the Realme 5 Pro better in both day and night. In the case of A50s, it crushes some of the shadows in the images. If you feel a little more creative, the macro sensor works ok.

While the Galaxy A50s is sporting a 32MP selfie camera, Realme 5 Pro’s 16MP shows that it’s not all about the numbers. Whether beauty mode is turned on or off, the overall quality of selfies is better on the Realme 5 Pro. Although whitening of skin tones is common, we love how the overall photos look. To be fair, the A50s delivered good-looking image quality with more natural skin tones. But if what you wish is to be more beautiful, Realme has you covered.

Whether it’s your face or other people’s faces, Realme 5 Pro wins this camera comparison.

Turns out, even Samsung’s Exynos 9611 chipset can’t beat the Snapdragon 712 of Realme 5 Pro. In our Geekbench test, the SD 712 closely beat Exynos 9611. As for the Antutu benchmark, Realme 5 Pro recorded 30k more points than its competition.

While synthetic benchmarks don’t reflect real-world usage, it surely does in this comparison. Navigating around ColorOS 6 was handled with ease. You’re more likely to encounter stutters and lags when using Samsung One UI. It’s also worth mentioning that Realme 5 Pro’s top model features 8GB of RAM, leaving you more room for multitasking.

As you may have guessed, Realme 5 Pro wins this one.

With both using single down-firing speakers, neither was able to provide a better speaker experience. However, we noticed that Realme 5 Pro handles distortions better at a higher volume. Fortunately, the headphone jack lives on in this comparison. Since there’s no support for hi-fi playback, the best the two can do is to deliver loud and clear sound quality.

That said, we’re giving this our first tie.

If quick top-ups are your thing, Realme’s 20W VOOC charging allows up to 50% in just 30 mins as opposed to the 15W of Samsung’s Fast Adaptive Charging. Realme 5 Pro continues to take the lead as we enter the game of longevity. Our typical use of frequent social media apps, hours of video streaming, all-day Wi-Fi connectivity, and music streaming shows that Realme 5 Pro can survive a beating. As for the A50s, we found ourselves in the red zone before dinner time.

That said, Realme 5 Pro takes this one.

Realme 5 Pro is retailing for at least P11,990 for the 4GB/128GB model, while the top model with twice the amount of RAM is selling for P13,990 only. On the other hand, Samsung Galaxy A50s is priced at a staggering P18,990. The internal storage stays the same but you only have 6GB of RAM to play with.

Delivering better cameras and raw performance at a very aggressive price against the competition is Realme’s perfect formula for the perfect mid-range smartphone. Samsung’s Galaxy A50s wasn’t able to live up to the expectations after the Galaxy A50 launched earlier this year. Now that the crown is up for grabs, Realme 5 Pro gladly takes it in this comparison.