Ever since the release of Redmi Note 7 Pro, every budget phone announced gets its spotlight stolen. But with the Realme’s latest phone offering, there’s now a reason for concern — the Realme 3 Pro. Building upon the good foundation of Realme 3 — the current Budget Smartphone King (based on our review) — the company is now ready to take a significant step in overall performance with a small step forward in price. Is Realme 3 Pro worth your money? And is it the Best Budget Gaming Phone to buy in 2019? 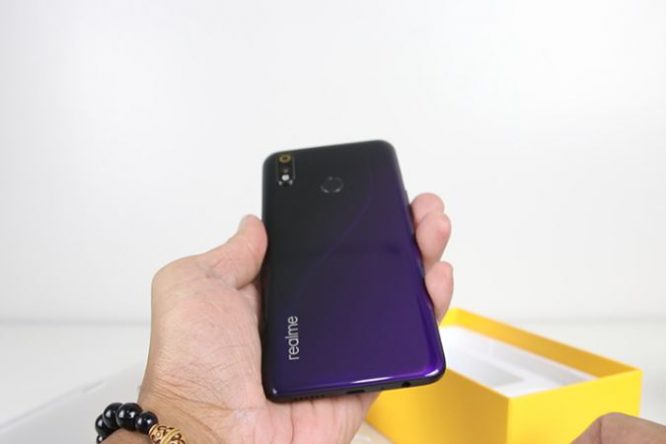 Realme 3 owners will feel at home with Realme 3 Pro‘s design. From the camera placements to the material used and aesthetics, it’s a familiar design from the company.

Starting from the back, the iridescent hue shines in three colors — Gray, Purple, and Blue. Unlike the non-Pro model, this one has a noticeable S-shaped pattern that adds to its polycarbonate-based build quality. The fingerprint scanner is still located a bit higher but not too overwhelming for the finger to reach. As for the main cameras and LED flash, it’s still vertically grouped on the top-left portion as highlighted by a decorative yellow, which, personally speaking, is a good touch. The camera array protrudes — enough to wobble when the phone is at rest on a table.

Realme 3 Pro has a polycarbonate frame to keep the cost to a minimum as well as its overall weight. At a glance, it’s a premium looking phone, but once held, that premium quality slightly diminishes. 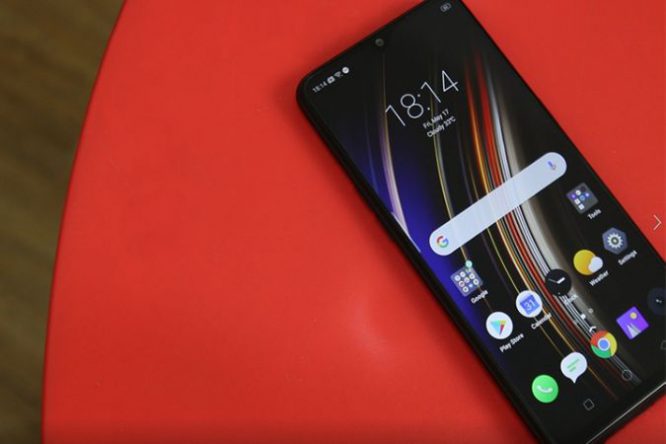 Moving to the front, there’s the usual teardrop-notched FHD+ IPS LCD panel but slightly larger at 6.3-inch. Getting the Realme 3 Pro means you’re also getting Corning Gorilla Glass 5 protection. The quality is sharp thanks to that high resolution, but don’t expect the display to be clearly visible under broad daylight. Where it really shines is the level of contrast ratio. It comes close to phones like the OPPO F9. Although colors are average at best, you can trickle that to a warmer or cooler tone.

Nothing separates the Realme 3 Pro when it comes to the display, but it’s enough for people who just want something better out of a budget smartphone.

Realme has built a good reputation when it comes to imaging. Even before, with its Realme 3, the company has stood out in mobile photography thanks to its chroma boost camera capability. Realme 3 Pro is no different, but this time, we captured photos mostly in AUTO mode.

As expected, Realme 3 Pro was able to capture real-life colors that are pleasing to the eyes.

Details and quality are still visible even when digitally zoomed 2x.

4x digital zoom still looks good but details are visibly washed out in some of the points of this photo.

Lowlight (HDR on and off) and Nightscape

HDR OFF. Even when this image was shot using AUTO mode, it still looks bright and details are still visible.

HDR ON. There is no big difference when HDR was turned ON. This mode has just turned the photo brighter.

When using selfie mode in low light, it is visible that details are lightly washed out.

Surprisingly, Realme 3 Pro is capable of 4K videos but only 1080p and 720p have electronic image stabilisation (EIS).

One of the biggest upgrades of Realme 3 Pro is the use of Snapdragon 710 (previously Helio P60 on the non-pro model). It is paired with 4GB/64GB. 6GB/64GB, and 6GB/128GB — depending on your region. 64GB of storage might be a bit constricting for a user this year, however, there’s an option to pop in a microSD slot of up to 256GB.

As expected from a Qualcomm chipset, doing day-to-day tasks is not a problem. The Realme 3 Pro is responsive, smooth, and snappy especially when combined with ColorOS 6 (based on Android 9 Pie). We give compliments to the GPU processing of Adreno 640 as it was able to provide higher and more stable frame rates. Sure, you can play graphically demanding games even in high graphics settings. It does get a little warm when playing games but not at an alarming rate, thanks to the Thermal Solution included by Realme. Overall, it handles games better than the Redmi Note 7 Pro and Samsung Galaxy A50.

In Geekbench, Realme 3 Pro really stands out against other midrange devices from Samsung and Vivo, thanks to its latest upper-midrange chipset, Snapdragon 710.

The company could’ve hit a home run if only they opted for Snapdragon 730, however, that would also mean an increase in price. Nevertheless, Snapdragon 710 is a solid chipset.

When it comes to its operating system, Realme 3 Pro is more on ColorOS 6, OPPO’s skin is now closer to Android than iOS. Although slight hints of Apple’s design still resides on the icons, folders, and Settings, we’re glad that app drawer is here by default. The skin offers tons of features, but you’ll be more interested in Phone Manager for memory cleaning, virus scanning, and app management, and Game Space for, well, gaming.

Read: Samsung Galaxy A50 Review: Is it a real midrange contender?

From 4230mAh of Realme 3 to 4045mAh of Realme 3 Pro — you might be getting a smaller battery capacity, but the company has included 20W VOOC 3.0 charging as compensation. That’s 0% to 50% in 30 mins always come in handy whenever quick top ups are needed, but it won’t matter that much when you can reach a full charge in an hour and 15 minutes.

The presence of an audio jack is always welcome whenever you need to listen privately, but we all know you’re here for the speaker. There’s only one speaker on the Realme 3 Pro, and it’s located beside the micro USB port. When not accidentally covered by the hand, the speaker comfortably reaches maximum volume without distortion and with a slight hint of bass. It’s easily the loudest speaker in a Realme phone. 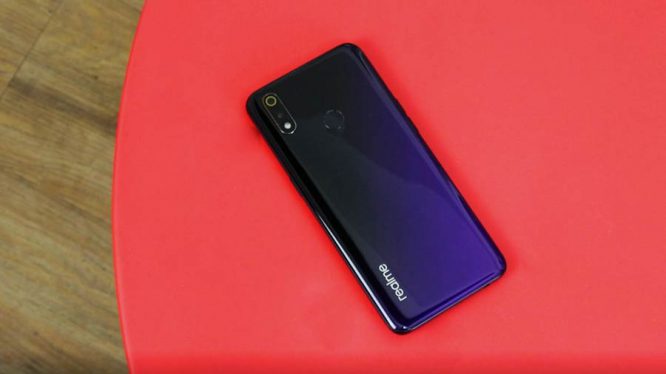 Being a Pro variant, Realme 3 Pro is way up to higher than its younger sibling, Realme 3. Aside from its stunning design language and powerful hardware specs, its camera capability has been upgraded giving you a stand-out mobile photography experience even in low light and a processor that is considered as an epitome of almost all midrange smartphones today.

Definitely, Realme 3 Pro is the best value for your money, and with a P12,990 price, it is perhaps the Best Budget Gaming Phone to buy in 2019.

Read: Android Pie (Beta) for Realme Devices Scheduled to Start on May 15