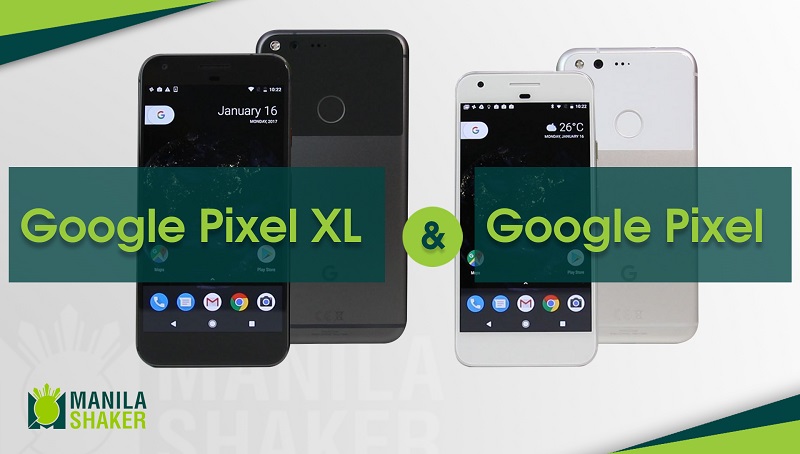 Released October of last year with a lot of head-scratching, Google announced their first ever Made by Google smartphone that has yet to officially reach Philippine shores.

This is our full review of the Google Pixel and the Pixel XL.

The Google Pixel and the Pixel Xl are similar in multiple aspects apart from key differences in size which we well get to in a bit.

The entire build is made of metal with a glass cutout for the upper portion to make way for signal reception, bluetooth, and NFC for Android Pay users.

This is where the camera resides as well with all its sensors and the dual tone LED flash. The lower middle portion of the glass is where the Pixel Imprint or fingerprint scanner can be found.

The entire back portion rounds and then angles towards the front panel.

The power button is located at the right side above the volume rocker. The opposite side houses the single nano SIM tray.

The top part is where you will locate the headphone jack (thank you, Google.)

Greeting you upon booting up will be a 5.5 inch QuadHD AMOLED display with great viewing angles and great color reproduction.

Viewing content in broad daylight will not be a problem as anything and everything can easily be viewed on the device.

The ambient display shows notification when the device is flipped or moved but doesn’t show 100% of the time. It’s no always-on like that of flagship Samsung models like the Galaxy S7 but it does the job in a pinch with battery efficiency in mind.

Topping the DxOMark that analyzes smartphone and dslr images, the 12MP f/2.0 main camera scored an impressive number of 89 points – the highest scored ever for a smartphone.

Shooting in broad daylight will not be a problem as images are sharp and colors are natural but struggles to capture details on shadow.

Even with just indoor lighting, it was still able to maintain a quality image.

As expected on low-light scenarios, some noise were creeping in but the details were a bit sharp compared to phones under its category.

The dual-tone LED flash will aid in eliminating noise by providing a sharper and natural image.

‘Good’ will be an understatement when describing the performance of the Pixel in night shooting. Yes, noise is present on the image but shots are brighter with quick capture speed compared to its competitors.

Recording a video can take up to 4K @ 30 fps with white colors appearing to be brighter.

Electronic Image Stabilization is present reducing the shakiness of the video.

The 8MP f/2.4 is pretty impressive as well with its wide angle and good dynamic range.

Being run by the capable Qualcomm Snapdragon 821 paired with 4GB of RAM no other Android smartphone will run faster than the Pixel XL.

Optimized to its full potential, streamlined into giving you the fastest experience. You can expect any all and apps to run on the Pixel and the Pixel XL.

On top of that, you can expect the latest and sweetest release from Google ahead of the rest of the world.

Perhaps the headliner for the Pixel will be the Google Assistant that is made more intuitive and more natural sounding compared to Google Now, Siri, and Cortana, as per tested by others in Western countries.

On top of that you will get free unlimited full resolution photo storage.

Antutu benchmarks were not that far from each other as they both reach around 140K points.

At 2770mAh and 3450mAh, the battery capacity of the Pixel and Pixel XL, respectively, can last a day of varied usage.

The bigger tank of the Pixel XL surprisingly charged the fastest at 2hours while the smaller sibling needed 17mins more. Rapid Charging played a role in this respect.

Endurance test proves that power users will enjoy more time with the Pixel XL as it garnered 4 hours of screen-on time compared to the 3.5 hours of the regular Pixel.

Even with two speaker grilles at the bottom, only the left side houses the main mono speaker. The mono speaker is good enough when watching a movie or listening to music even with the volume is cranked up at the highest value.

What do you think of the Google Pixel and Pixel XL? Share your thoughts in the comment section below.