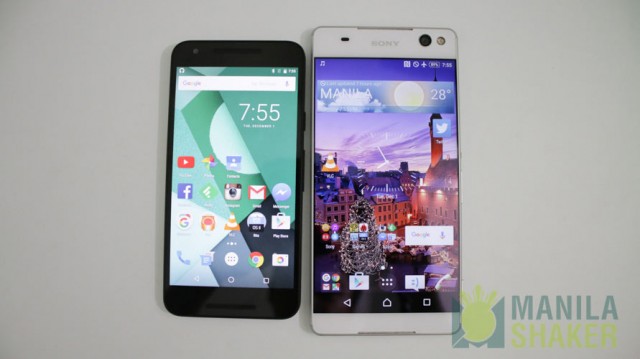 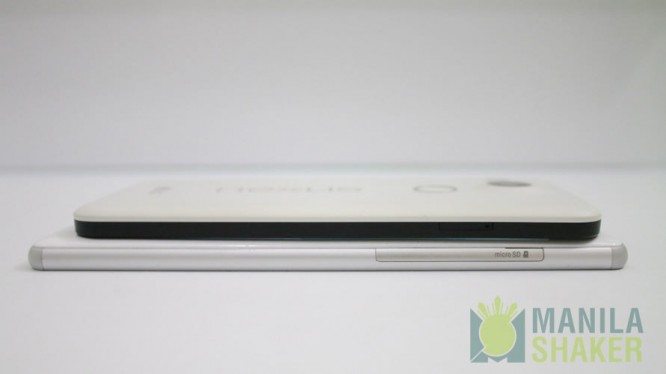 Both devices carry a polycarbonated back, with the Xperia C5 Ultra possessing a oleophobic coating on its back cover, enabling a glossy and easy-to-grip feel on the device. As for the 5X, its no stranger to being handled easily, the plastic back of the 5X, might not be stylish, however, it actually helps in making the phone, easier to handle by a mile.The C5 Ultra’s IP 68 certification is a very convenient addition to the C5 Ultra, which focuses on utility and better protection. The C5 Ultra lacks the fingerprint scanner feature, in which the 5X is excellently equipped with. The C5 Ultra also has an excellent collection of physical buttons, while the 5X has a few physical buttons in hand (just the volume and power button, as well as the fingerprint scanner.

Which among these devices would be something you’d want? Hit us up on the comments section and share your thoughts. 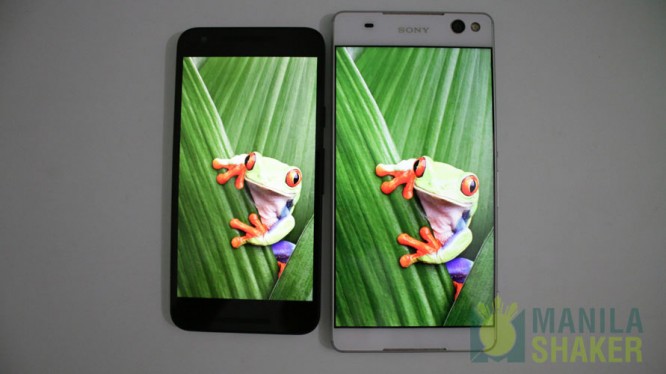 The C5 Ultra sports 6-inch 1080p FHD display, while the Nexus 5X carries a smaller 5.2-inch 1080p FHD display. Brightness level and clearness are practically at par with  each other, however in terms of viewing angles, the C5 Ultra was a bit weary. The Nexus 5X and C5 Ultra delivered a pretty distinct display quality, however, we felt that the viewing angle prowess was advantageous to the Nexus 5X overall, while the Xperia C5 Ultra’s 6-inch screen showed a better viewing experience, for its bigger and dynamic-wise display.

If you prefer a  more dynamic and bigger screen, then the C5 Ultra is the obvious choice, however, if  display adaptability is what your yearning for, then the best choice is the Nexus 5X.

The LG Nexus 5X features a prominent 12MP rear shooter and 5MP selfies shooter, while the Xperia C5 Ultra holds a very balanced pair of sensor, with its 13MP rear and selfie shooter. Quality-wise, both shooters were a bit at par with one another, with colour accuracy sticking over to the Nexus 5X. Colour on the C5 Ultra felt a bit washed out and dimmed, while the 5X showcased a more livelier colour and vibrance level was really balanced. However, the C5 Ultra was bright on daylight shooting.

For night shooting, Xperia C5 delivered a fairly inaccurate colour on its outputs, but was seen to be a bit clear, in comparison to the Nexus 5X’s outputs. The 5X was colour accurate though, but was beaten in the noise reduction department, which was probably one of the strong points of the 5X. For selfies, the 13MP selfie shooter of the C5 Ultra was better in accuracy and colour blending than the 5MP selfie shooter of the 5X.

The C5 Ultra shoots 1080p videos, while the 5X shoots 4K UHD videos. Video outputs we’re seen to be far with one another, with the 5X dishing out better outputs overall.

What do you think of the 5X and C5 Ultra’s shooters? Share with us your thoughts. 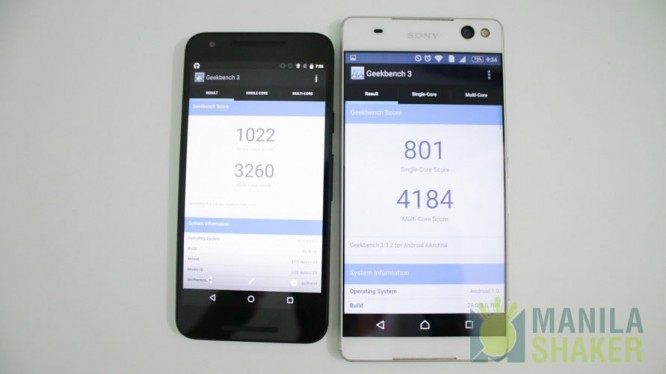 The LG Nexus 5X carries a pretty modern Snapdragon 808 hexa-core chip, while the Xperia C5 Ultra carries the not-so-old MediaTek 6752 chip. For RAM, both devices carry 2GB of RAM, with the 5X giving out options of 16 or 32GB of internal storage, while the C5 Ultra stays with its fixed 16GB of RAM. However, the 5X doesn’t support microSD cards, while the C5 Ultra not only supports it, but also provides a 128GB of microSD card limit. For benchmark scores, the results were a bit marginal and in a way, both devices showed off their fair share of system capability.

See also: Nexus 5X Review – One of the Androids I Wanna Buy 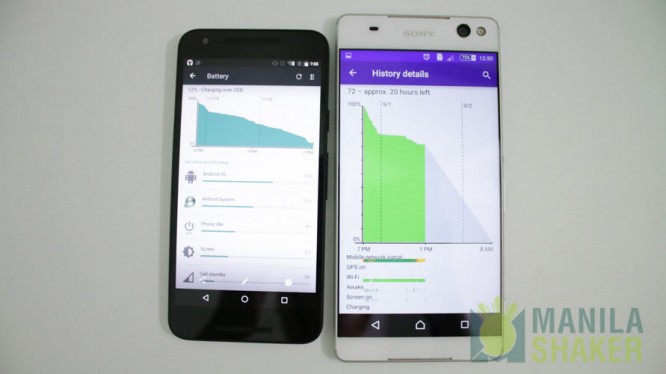 Like the M5, Sony’s Xperia C5 Ultra carries the Z3+ unlikely battery capability of 2-days continuous use feature, with the latter carrying 2930mAh battery, while the Nexus 5X has 2700mAh battery. On the concluded standard battery test, the C5 Ultra stayed true to its word, with the latter lasting out for a day or so (exposure to 2-hour loop HD video loop), while the Nexus 5X was able to last only at 9 hours and 20 minutes. However, the 90-minute charging speed of the Nexus 5X is truly phenomenal. 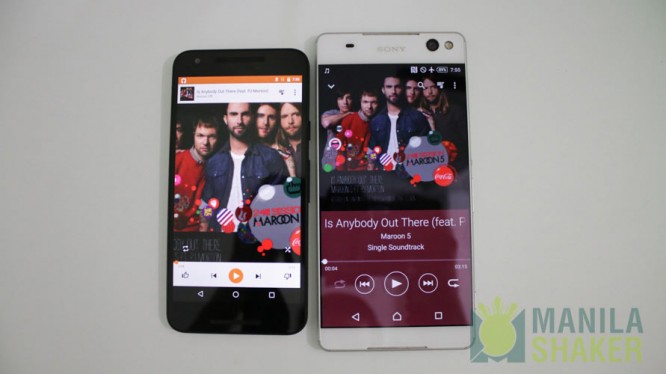 The Xperia C5 Ultra and Nexus 5X were a bit par with each other, when it comes to audio, however, volume power was seen better on the Nexus 5X, but sound clarity was overall heard on the C5 Ultra. Power and clarity were the major factors that differentiated both devices.

If your interested with volume power and most likely be using  headphones ,then the Nexus 5X is a pretty good choice for audio purposes, however, if clarity on speaker is what you’re after, then the C5 Ultra is an overall better choice. 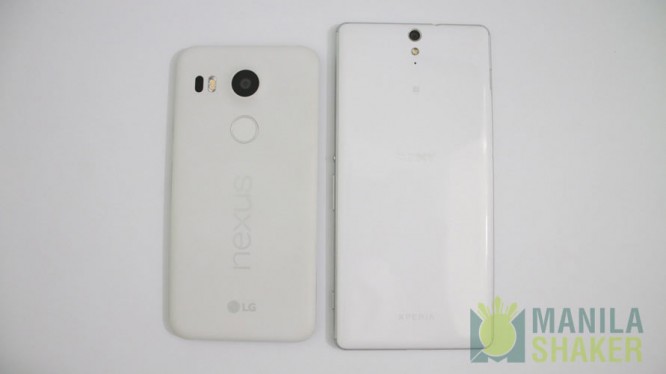 The LG Nexus 5X, which is priced at Php 18K and C5 Ultra (currently price at Php 19,190)  doesn’t exactly have a huge difference in pricing. However, quality-wise, they sure have strengths and advantages. It’ll depend on your own preference as to what device will you choose.

Redmi Note 9 vs Realme 6i – Which is Better in Gaming?