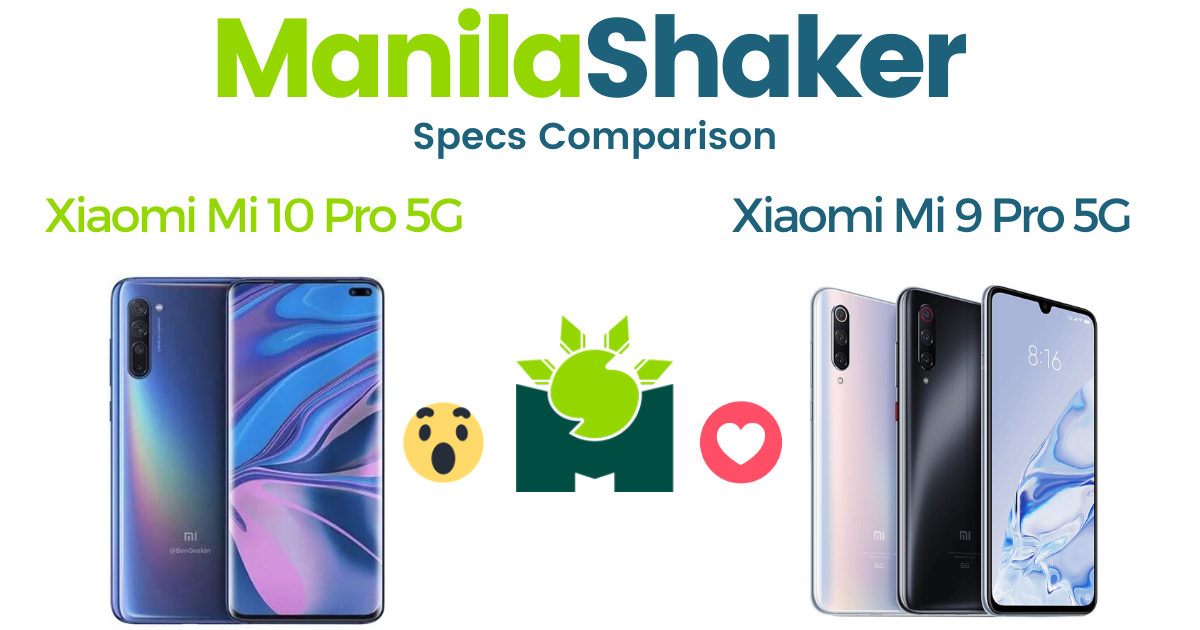 One of the most affordable budget phones to date is Xiaomi’s Mi 9 Pro. Launched back in September, it managed to keep a reasonable price tag of CNY 3699 (~P27k) while delivering 5G to consumers. But nearly half a year later, the Chinese company introduced the Mi 10 Pro. It carries up-to-date flagship specs and even managed to top the DXOMark camera chart in the process. Comparing the two flagship-killer devices, what’s new between the two?

If you’re expecting a drastic change in design, you won’t find it here. For the most part, Mi 10 Pro retained the design cues of its predecessor. The camera placement is the same, except with more sensors to boot. It’s the same glass+metal+glass combination but it’s interesting to see Corning Gorilla Glass 5 instead of the latest version 6. The difference starts to show once you’re holding the two. The newer phone is a bit heftier due to the 9mm thickness and 208g weight. If you think there’s official IP rating here, well, there’s none.

One of the biggest upgrades found in the Mi 10 Pro is the display. It’s a tad larger at 6.67″ but the Super AMOLED FHD+ now supports 90Hz refresh rate. On top of that, the touch response rate is 180Hz and the peak brightness is 1000nits. The screen even supports the newer HDR10+ standard. Also, the teardrop notch on the Mi 9 Pro is now a pinhole cutout on its successor.

Snapdragon 865 vs 855+ – both have the same size of process node but the former is up-to-date due to the 7nm+ process. There’s still a boost in performance but that’s not noticeable in day-to-day use. As for the GPU, it’s using Adreno 650 instead of the boosted Adreno 640 (700MHz). Fortunately, both are running on the latest version of Android with MIUI 11 on top. In a typical Xiaomi fashion, the RAM still goes up to 12GB and the storage can still go up to half a terabyte. While Xiaomi phones have always displayed great performance, the experience is bound to be better thanks to an improved vapor chamber liquid-cooling system.

Another huge upgrade to see here are the cameras. The Mi 10 Pro now carries 108MP sensor that can record up to 8K @ 30fps and 4K @ 60fps. With the larger sensor, expect more detailed shots from it. The ultrawide sensor gets a bit of spec bump, too. While the 12MP with 2x optical zoom on the Mi 9 Pro looks better on paper, the successor uses the 8MP for up to 10x hybrid zoom while the 12MP portrait is made for 2x optical zoom. As for the selfie camera, both devices are still using the same 20MP f2.0 wide. Expect software processing to show you the difference. However, Mi 10 Pro allows for 720p @ 120fps for that slow-mo selfie effect.

Neither of the two comes with a headphone jack but the Mi 10 Pro makes up for it with stereo speakers, something the Mi 9 Pro lacks. Additionally, it supports 24-bit Hi-Fi playback including wireless audio via Bluetooth.

With a bigger display and fast screen to boot, Mi 10 Pro will need every mAh to last an entire day. Luckily there’s a 4500mAH for that vs 4000mAh of Mi 9 Pro. While the 30W wireless stays here, the reverse wireless trickled down from 10W to 5W. However, you won’t notice the drawback when you have up to 50W charging technology through Power Delivery 3.0.

For the past recent years, we’ve always complained about phones receiving iterative upgrades every time a successor is released. The narrative seems to be different this time. However, the significant upgrade in specs and features also means a significant price bump. Xiaomi Mi 10 Pro starts at CNY 4999(~P36K) in China while the Mi 9 Pro started at CNY 3699 (~P27k). It may be the most expensive flagship yet from the Chinese company, but it’s still less expensive than the S20 series.