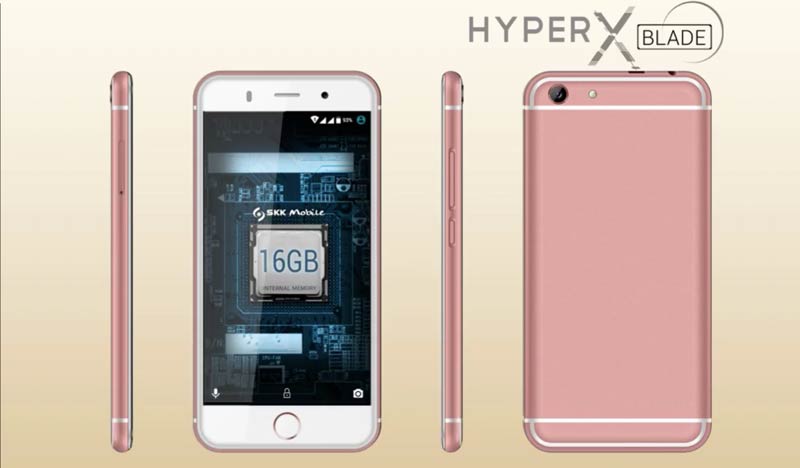 Despite the increasing number of affordable smartphones in the local market, there’s only a handful of devices that can offer premium design for your budgeted needs. SKK Hyper X Blade is one of them, but does it offer something that meets more than the eye? Let’s find out in our full review of the SKK Hyper X Blade.

The striking resemblance of the Hyper X Blade with the iPhone 6s is undeniable. From the curved edges down to the antenna lines, it is like a carbon copy of the 6s. You will only be able to identify this handset once you see the back with the SKK Mobile Moniker while the front is pretty much the same story with the rounded home button.

Taking a tour around the phone will provide you the microUSB port and 3.55mm headphone jack situated at the top, the power button and volume rocker on the right side, the hybrid dual-sim tray on the opposite side, and the bottom-firing speaker.

It is pretty impressive to incorporate a high-end design into a budget device especially that phones are starting to get thinner for a hefty price tag. Design-wise, you will like this if you are a fan of iPhone 6s.

If there is one thing that Android manufacturers cannot do, that is to copy the display of Apple smartphones. The Hyper X Blade is sporting a 5.0-inch 720 HD 2.5D arc screen at 293ppi.

Its display is pretty decent for its price but using under sunlight will be a struggle.

The 13MP autofocus camera w/ LED flash does not come with pre-installed camera application, so you are required to install a third-party app from the Google Play Store.

Shooting in broad daylight will result to fair color and details on the image with overexposed bright areas or blown out photos.

The same thing can be said on indoor shots with decent lighting, taking close-up still images though will have a hard time in finding focus on the subject thus, producing pale colors and blurred image overall.

Low-light scenarios will be able to capture colors with noise all over the image. Night time shooting though will only capture lights with undistinguishable objects.

Recording a video can take up to 1080p with fair quality overall.

Taking a selfie with its 5MP front camera resulted to smooth details with a little bit of noise on the image.

The Hyper X Blade is being powered by 1.3GHz quad-core CPU with 1GB RAM and a dated Android Lollipop 5.1 version.

The near-stock android UI will aid in navigating the device in a breeze. However, a few running apps in the background will provide you a few hiccups. Switching from one application to another is bearable but sometimes closes the previous application.

1GB RAM is not enough if you are looking into playing games, casual games might be running smoothly for a few minutes but you will experience occasional frame drops or worse, automatic closing of application.

The sound quality of the bottom-firing speaker is fair with minimized distortions even when the volume is maxed out.

The 2700mAh might not be enough for its 5-inch HD screen as it was only able to last around 16hours of standby time with 2.5 hours of screen-on-time. Filling its tank will take you 2 hours at most.

The SKK Hyper X Blade comes with a price of Php3,599. For less than 4 thousand pesos, you are only getting an impressive imitated design with acceptable display quality. Hyper X Blade looks good but the below average performance pulls it down from the rest.