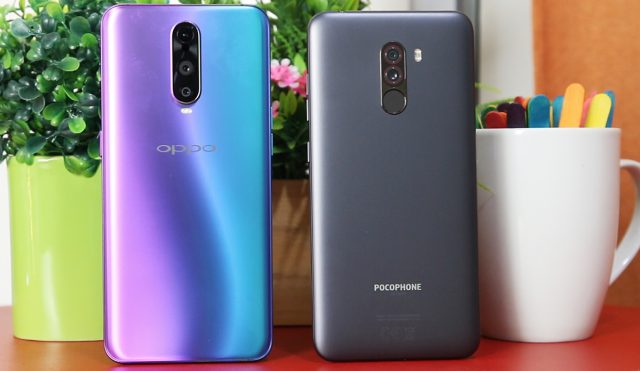 As OPPO launched the R17 Pro in the Philippines, we received both positive and negative feedbacks from our readers and subscribers regarding the mentioned smartphone. A comparison with Xiaomi’s Pocophone F1 was also requested by many as they wanted to know which handset suits them the best and their budget. We tested the camera, gaming, overall performance, battery, and other features to test them out and deliver the results that were requested. Which one should you go for? Find out here.

The OPPO R17 Pro sports a 6.4-inch Full HD+ AMOLED display with 2340 x 1080 resolution and 402ppi density. In addition, the screen is protected by Corning Gorilla Glass 6. The smaller notch provides a 91.5% screen to body ratio, though this notch can be irritating for some who are easily annoyed by unbalanced proportions.

Jumping to its contender, the Pocophone F1 sports a 6.18-inch Full HD+ edge-to-edge screen with a resolution of 2160 x 1080 pixels and has an 18:8:9 aspect ratio. It has a Corning Gorilla Glass protecting the display. In regards to its notch, it’s wider than the R17 Pro’s – but there’s an option to hide it. Just go to settings then head to full-screen display and choose “hide notch”.

With the two handsets sitting side by side, it’s noticeable that the OPPO R17 Pro has slightly brighter than the Poco – with the R17 Pro having a warmer toned display and the Pocophone F1 with a slightly cooler one. In terms of resolution, both deliver sharp details and accurate colors. 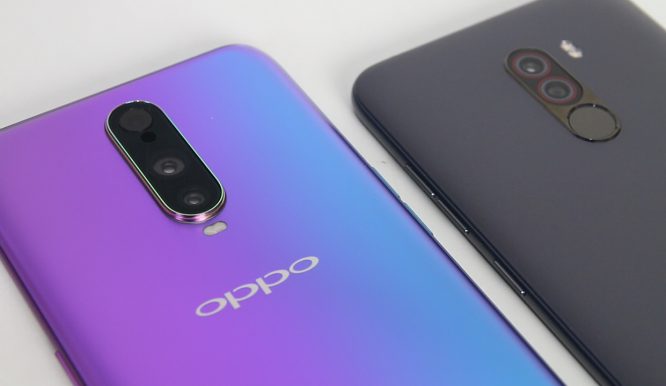 The body of the POCOPHONE F1 is a unibody polycarbonate design. For some people, a smartphone with a plastic body makes it feel less premium. Well, it may be one of the ways to keep it under PHP 20,000 with a Qualcomm Snapdragon 845 chipset. As for ergonomics, the handset can be easily operated with one hand.

The OPPO R17 Pro has an undeniably stunning rear design and for femme millennials, this handset is an eye-catcher. Yes, the blueish-purple gradient smartphones aren’t technically new this 2018, but the matte finish of this handset makes it stand out from others with the same rear design, color-wise

Design-wise, these smartphones are far from each other. The R17 Pro has a flashy vibrant twilight-colored rear, whereas the Poco has the simple yet solid looking build. In terms of weight, the Poco is a tad heavier than the latter.

Going to the optics, the POCOPHONE F1 sports a dual 12MP + 5MP rear camera with Sony IMX363 sensor. For taking selfies, it is built with 20MP with Super Pixel technology. On the other hand, the OPPO R17 is the company’s first device with an AI triple camera setup. It features a 25MP main sensor+ 20MP secondary camera + TOF 3D (time-of-flight) stereo camera. One of the main highlights of the cameras on the R17 Pro is the Ultra Night Mode.

Our first sample set was taken at our veranda. You can see how these two photos differ in brightness and contrast. The R17 pro produced a lighter and brighter outdoor shoot while the Poco with a photo that has a stronger contrast. In terms of clarity, both are almost at par in detail sharpness.

Same as the previous sample set, the R17 Pro’s shot is lighter compared to the Poco’s photo. Going to detail sharpness, the Pocophone F1 produced a photo with sharper and crisp details.

The two handsets are consistent when it comes to their photos. Similar to the previous sample sets, the R17 always produces brighter and more vibrant photos while the Poco with more natural looking shots.

Both handsets are great for taking night and low-lit assisted shots. Both the Poco F1 and R17 Pro can definitely take lighting sources well. These photos look amazing with deeper blacks and vibrant colors, but not overcompensating the quality.

The R17 Pro and Poco F1 aren’t only great in taking rear shots but selfies as well. Personally, we like the selfies taken on R17 Pro more for its naturally beautified selfies. The Poco slightly made the subject’s dark/black features darker – like the eyebrows. Going to the bokeh effect, both produced great selfies with bokeh too.

The OPPO R17 Pro is powered by a Qualcomm Snapdragon 710 Processor with an 8GB RAM. It has a 128GB internal storage but it’s sad to say that it is not expandable. This OPPO smartphone runs on a Color OS 5.2 based on Android 8.1 Oreo out of the box.

The key highlight of Pocophone F1 is that it offers a high-end chipset at an affordable price. This redefines the midrange game as it can compete to some of the flagships released this year. The Pocophone F1 is powered by a Qualcomm Snapdragon 845 chipset clocked at 2.8GHz octa-core with Adreno 630 GPU. It has two storage options, you could go for the 64GB internal storage or the more expensive version which is the 128GB variant, both along with a 6GB of RAM.

With the Poco’s top-tier hardware, it absolutely aced our gaming test. We played a bunch of graphically heavy games like the Asphalt 9 and PUBG, and just like playing on a PHP 40,000 price tagged smartphone, it performed well. No lags occurred while in-game, multi-tasking is a breeze, and thanks to its cooling solution – the handset didn’t heat up even if we played Asphalt 9 for a long period of time.

Meanwhile, the OPPO R17 Pro isn’t technically for heavy gamers out there as the company didn’t make this handset for graphically heavy games and powerful performance. This smartphone sits at the middle of the smartphone-type hierarchy as it is a premium midrange handset. The company chose to put a Snapdragon 710 when they could easily place an 845 chipset and make this a flagship. Nevertheless, it’s great for web browsing, photography, and light gaming. This handset also has the in-display fingerprint sensor that was first seen on a Vivo smartphone, which the Poco doesn’t have.

We tested the OPPO R17 Pro and the Pocophone F1 using the following benchmarking tools and here are the results:

Going to the battery department, this is where the R17 Pro shines. The OPPO R17 Pro has two 1,850 mAh batteries making it a sum of 3,700 mAh. It is geared with a fast charging feature powered by SuperVOOC technology. Upon testing, we got a fully charged OPPO R17 Pro in just about 35 mins. For its battery life endurance, this handset can stay up for around 2 days with full web browsing, medium media playback, and light gaming.

For the POCO, Xiaomi provided a large battery pack of 4000mAh with w/ Quick Charge Technology 3.0.  Although charging time still isn’t fast enough even with the QC 3.0, we got about 50% in an hour and 20 minutes of charging. Despite the average charging time, the Pocophone did well in our battery endurance test. The battery juice lasted a day of web browsing, around 18h of media playback and light gaming.

The Pocophone F1 produces louder audio because of is its stereo speakers. It gives loud and crisp sound but it kind of lacks in the bass department. Meanwhile, the OPPO R17 Pro also produces loud audio despite only having one speaker. Although the audio can be scratchy when the volume is set at maximum level. On medium volume though, it wasn’t loud enough but the sound was clearer.

After laying out the difference and similarities of both handsets, and with a HUGE difference in pricing, which smartphone is for you? Comment down below!

Xiaomi 70mai A1 and A1 Pro: Sit-Down E-Scooters With Wide Cameras for P21k