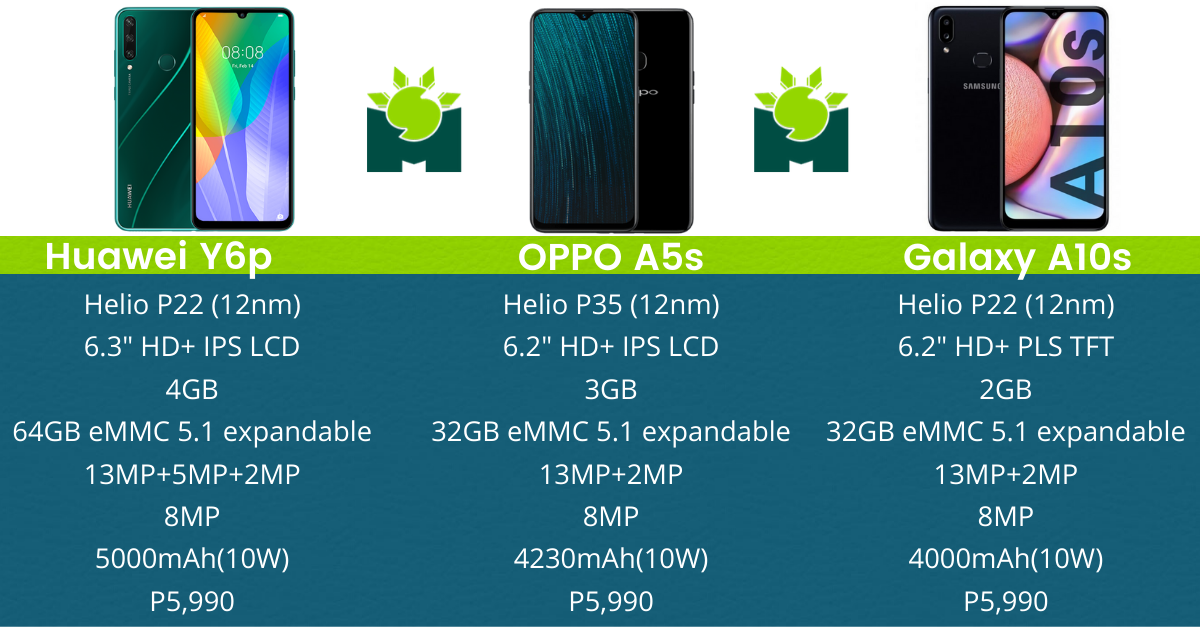 Wondering what phone you can get for only P5,990, well, these are the top three choices you have — Huawei Y6p, OPPO A5s, and Samsung Galaxy A10s. While all three have the same price, they differ a lot in offered specs and features. Luckily, all three are available already if you ever see yourself purchasing one of them after reading this comparison. At the end of this guide, we hope we were able to help you figure out the best budget phone for you. With that said, let’s start with what makes each phone stand out against each other.

READ: Top 10 Reasons Why Huawei Y6p is a Great Budget Phone to Buy

What are the similarities between the three cheap phones?

When it comes to the viewing experience, neither of which offers better quality than the other. We’re still talking about IPS LCD (TFT in the case of Galaxy A10s) with HD+ resolution. The same goes for the all-plastic material used for the frame and backing. Cameras won’t differ much in hardware as all three use 13MP sensors and 8MP selfie cameras. It’ll be up to you whether you prefer the smoothened post-processing of OPPO and Samsung or the less saturated version of Huawei. As for the rest, all three sport rear-mounted fingerprint scanner, dedicated microSD slot, and audio jack.

Coming into this comparison, OPPO A5s holds the shortest straw as it’s the oldest of the bunch, released back in April 2019. But feature-wise, it’s not that far from the competition. At this price point, you get a 6.2″ HD+ LCD with a teardrop notch. There’s even Gorilla Glass 3 protection to keep micro-scratches minimal. When it comes to performance, the Helio P35 chipset is the best in this comparison. It has a slightly higher GPU and base CPU clock speeds versus Helio P22, but it’s still an advantage nonetheless. In a nutshell, it’s an overclocked version of the P22. Although the device still runs on Android 8.1 Oreo on top of ColorOS 5.2, you don’t have to worry about the lack of GMS.

Through Lazada, you can purchase the A5s in blue, black, and red colors. However, you only get 3GB RAM and 32GB storage since there’s no other available model. 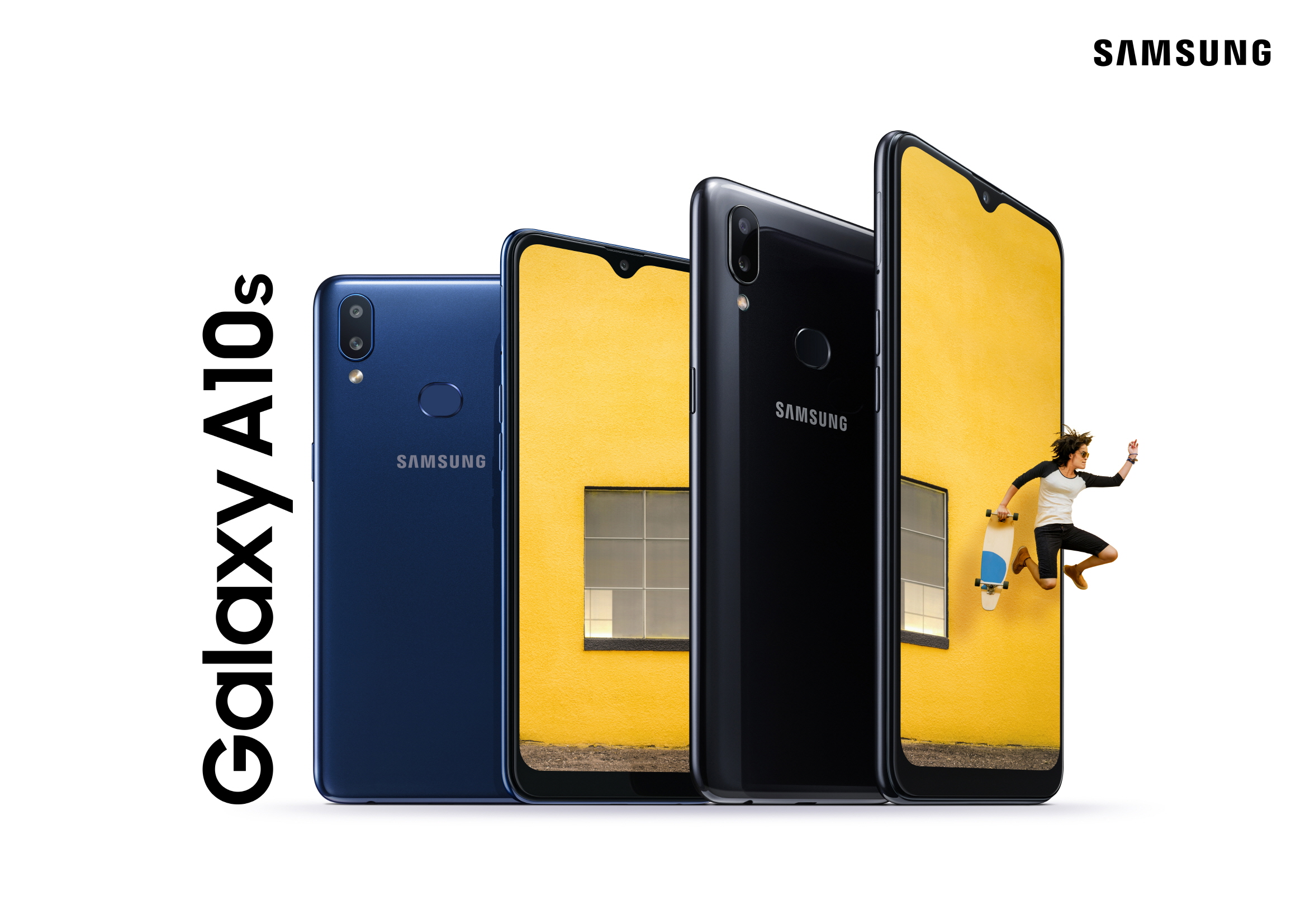 Like the A5s, Samsung Galaxy A10s was released last year in August. However, the South Korean brand took until Q4 of 2019 to launch the entry-level phone in the Philippines. Despite being nearly a year old phone, the original Android 9 Pie is now upgradeable to Android 10 with One UI 2.0 on top. It’s a pretty impressive feat for an entry-level phone to receive a major software update.

As for the display, although it has the same size and resolution as the A5s, the A10s is using Samsung’s PLS TFT. According to the brand’s claim, it’s around 10% brighter and better in color reproduction. If you want to purchase the A10s, it’s only available online in Green color and features 2GB/32GB combo. You might be able to get the red, black, and blue versions if you visit a physical store. 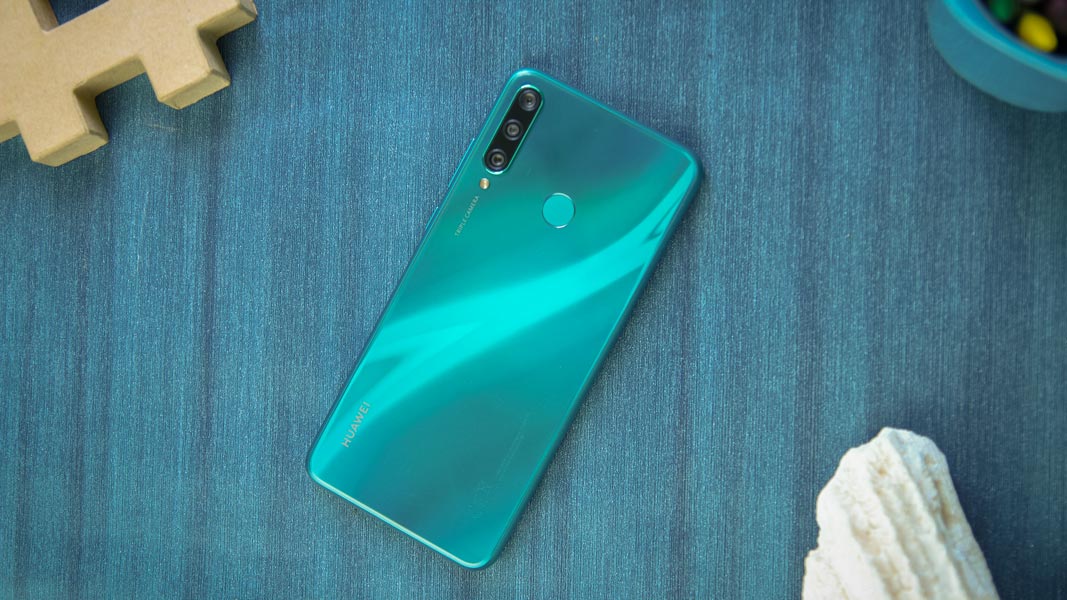 Last but not least is Huawei Y6p. It’s the latest device out of three, so it holds an advantage in this comparison. Now whether it’s the battery, storage, or cameras, Huawei’s latest entry-level phone is ahead by a significant margin. You still get the same HD+ IPS LCD but, it’s a hair bigger at 6.3-inch. And the worries of running out of storage is non-existent here, thanks to the 64GB internal storage. On top of that, you get 4GB RAM already. In fact, it might just be the cheapest device with that kind of combo.

When it comes to cameras, the rear features a 13MP sensor and a 2MP depth lens. What’s more, is the addition of 5MP ultrawide. Again, for a cheap phone, it’s a rarity. Huawei Y6p is the only phone, out of the three, with 5000mAh battery. Although it charges at 10W with the use of micro USB, there’s reverse wired charging. Furthermore, Bluetooth 5.0 is present — this means better connectivity with wireless audio devices.

Really, the only reason why you wouldn’t get the Y6p is the lack of GMS. While AppGallery by HMS supports nearly all the most popular apps that you can see from the Play Store, some might find it inconvenient as it’s a new interface to learn. Oh, and there’s one more thing — Huawei Y6p is almost always out of stock.

No doubt, Huawei Y6p is the best phone in this comparison. Sure it lacks GMS, but taking the time to learn AppGallery is like getting a new phone from a different brand. You need to re-learn your way through the ecosystem, except it’s an app. Also, it might be using Helio P22, but it has proven in reviews that it’s a capable chipset for day-to-day tasks and even casual-to-mid gaming.