Even the poor man’s Huawei Mate 30 Pro is still very expensive for most consumers. Introducing Huawei Mate 30 — a powerful phone and camera for a price of €799 (~P46k) for the 8GB/128B model.

Huawei’s “small phone” packs nearly the same design and specs as Mate 30 Pro. You still get the large, rounded camera module on the back, however, there’s only IP53 rating and a flat display. But if we’re to talk about quality, Huawei didn’t skimp on it.

In the case of selfie camera, Mate 30 uses a 24MP f2.0 sensor. Without a 3D ToF sensor, bokeh effect is achieved thru software algorithm.

Running Kirin 990 chipset, Mate 30 is capable of 5G connectivity. It supports 5G dual-SIM slot, too. Powering the phone is a large 4200mAh battery. You can use the company’s improved reverse wireless charging here, as well as its 40W SuperCharge and 27W wireless charging. With Android 10 out of the box, the Mate 30 comes with the re-designed EMUI 10. But due to the ongoing US-Huawei Trade Ban, Google apps and services are not included. Getting a Huawei Mate 30 means getting Huawei Mobile Services which is plagued with China-centric services.

Two things Huawei Mate 30 have and its bigger sibling doesn’t are headphone jack and a speaker grille. Even if this is Huawei’s least expensive flagship phone, it still costs a lot especially when compared to Apple iPhone 11 that costs around P36k. 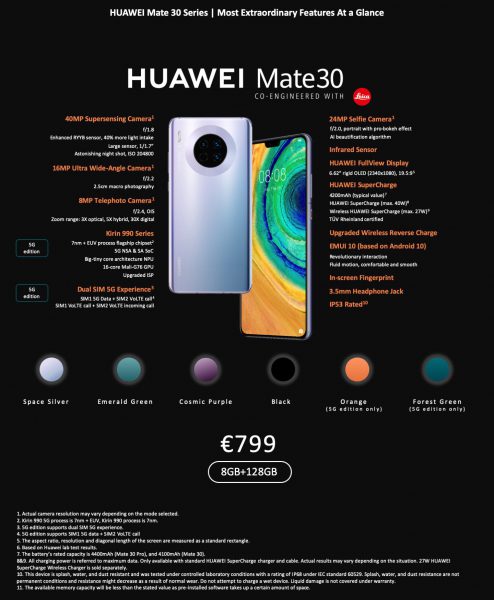