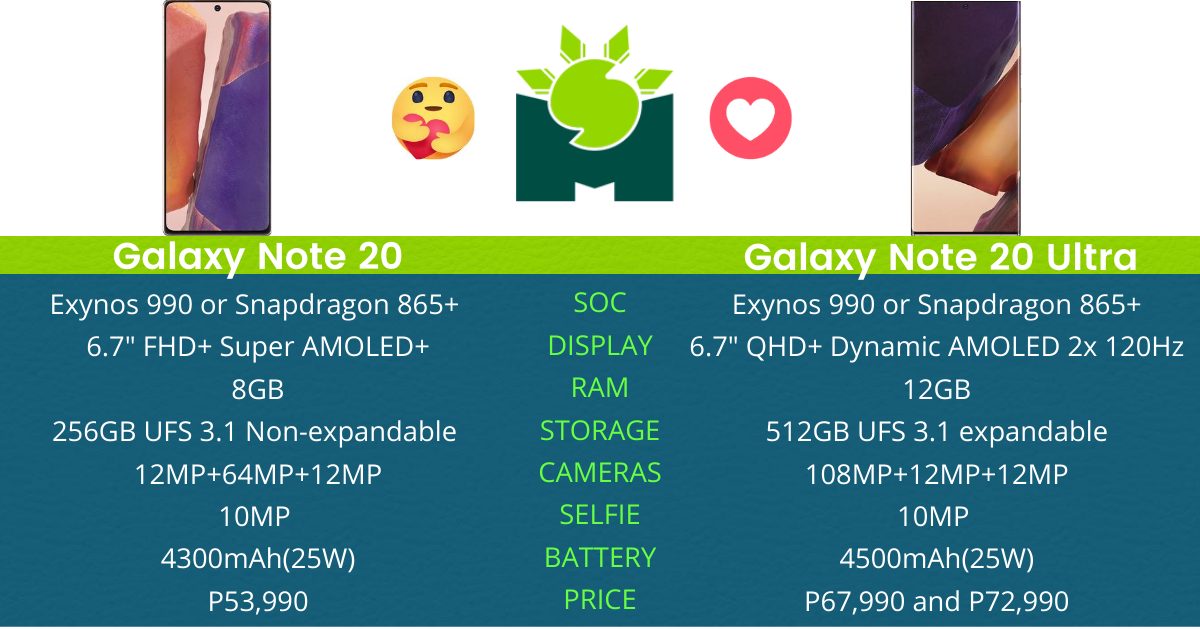 Are you planning to get either the Note 20 or the Note 20 Ultra? We are here to lay out the similarities and differences between Samsung’s most powerful handsets in 2020. Provided we have two Note phones to compare — you may be thinking that the less expensive option is the best option for you. After all, Note Series is well-known to be powerful, jam-packed, no holds barred phone. Well, this year, that is simply not the case anymore.

Boxy, slim, and solid — these are the three traits of any Note phone, until now. The regular Note 20 is still boxy and slim but, it’s not as solid as its bigger sibling and predecessors. Seemingly trying to make plastic a thing in a high-end phone, Samsung went with its glasstic solution instead. Coming in Mystic Green, Bronze, and Gray, to be fair, Note 20 doesn’t look cheap. Though the plastic feel is undeniable here, it’s still a premium-looking device. And it’s not as if Samsung omitted IP68 water and dust resistance. I guess the only gripe here is that the Note 20 doesn’t feel as premium as it looks.

In the case of Note 20 Ultra, it has sharp edges that, once you see it, you’ll immediately recognize it’s a Note phone. Unlike the regular Note 20, this one features a glass-steel-glass body. Both front and back are protected by Gorilla Glass Victus, which is the latest version from the glass company. Additionally, the frame is of stainless steel, much like the iPhone 11 Pro Max. Though the Note 20 Ultra is heavier at 208g, it’s actually thinner at 8.1mm.

Moving over to the display, the Note 20 comes with a flat panel and a slightly thicker chin bezel than the Ultra. Samsung hasn’t confirmed yet whether it’s using the same Victus glass as the Ultra but, we think it’s the older Gorilla Glass 6 or 5. When it comes to technical specs, the regular Note 20 features a 6.7″ FHD+ Super AMOLED+ with HDR10+ support. On the flip end, the Note 20 Ultra makes use of curved, Dynamic AMOLED 2x in a 6.9″ size. While the resolution goes up to 1440p, the exclusive 120Hz refresh rate is available only at 1080p, likely to save battery. Though both still support S-pen interactions, the greatly-improved latency on the Ultra is now at 9ms, as opposed to the 26ms of the regular model.

It’s disappointing to see Samsung cheap out on Note 20, notably when the base model of the S20 features a faster and sharper screen. If anything, the regular Note feels like a Note 20 Lite. 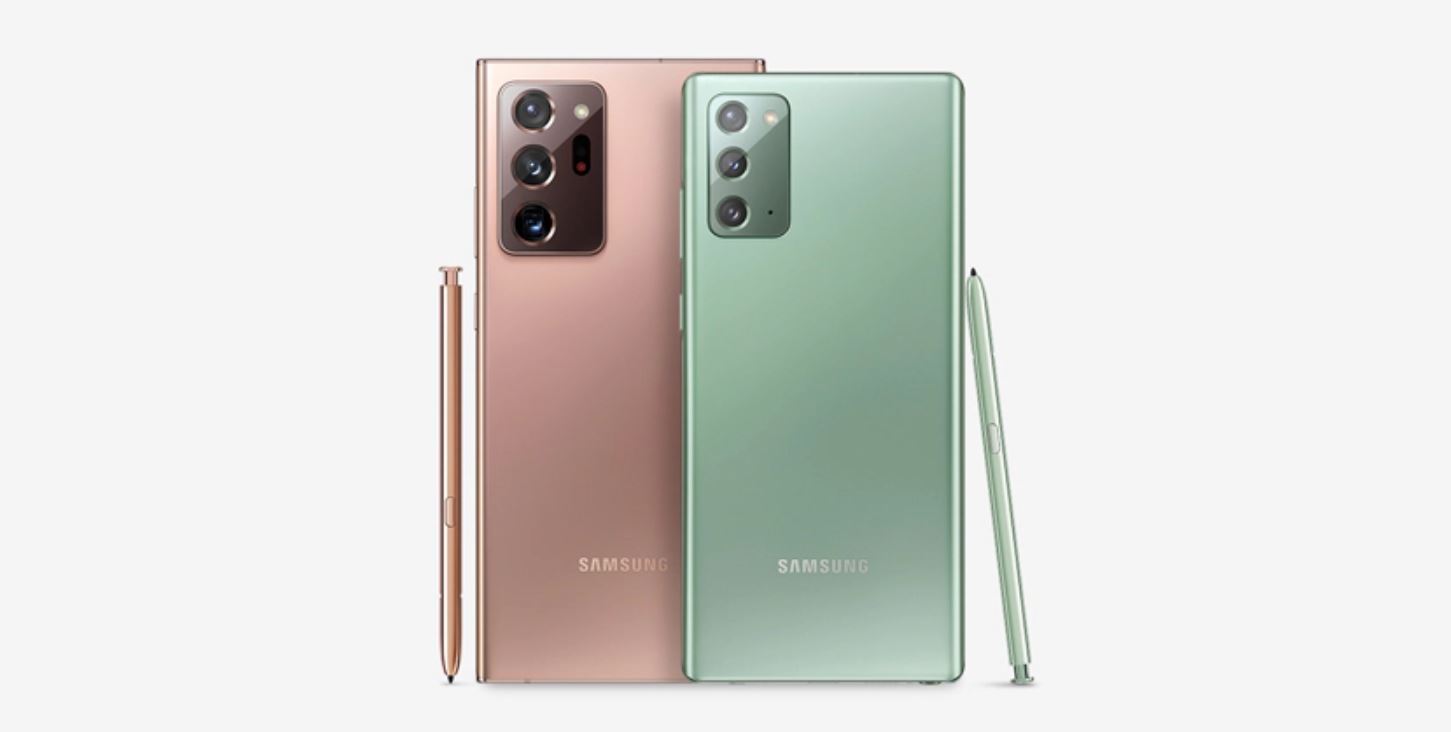 Exynos 990 and Snapdragon 865+ — For all the tech nerds out there, rejoice! Samsung is still using Qualcomm chipsets. The bad news — it’s only limited to the USA. As for the rest of the world, including South Korea, you can cry over the Exynos 990. Not to throw shade at Samsung’s in-house chipsets, but the Snapdragon counterparts have always outclassed Exynos in power and battery efficiency for the past three years. Regardless, both still come with Android 10, featuring One UI 2.1 on top. While we can’t do anything about the hardware, it’s interesting to see Samsung committing to three years of major software upgrades and security patches. Much like Google Pixel 4a, the Note 20 Series will support up to Android 13.

As for the tangible things, it’s not looking good for Note 20. At this point, we’re used to the Note Series dumping the jack for good. But for some reason, Samsung found the need to throw away the microSD slot, too. It means you have to spend more on the 256GB if you want more storage. For the RAM, the regular Note 20 only comes with 8GB, with the Ultra with 12GB across all models.

Honestly, it’s like Samsung doesn’t want you to buy the Note 20.

If there’s an award for the largest camera bumps, Note 20 can claim it anytime. You probably are distracted by the size that you haven’t realized that there are only three cameras on the back. The regular Note comes with a 12MP sensor, which is the main shooter, another 12MP for ultrawide, and a 64MP lens that offers up to 30x digital zoom. Compared to Note 20 Ultra, the main sensor is 108MP, the same with the S20 Ultra. While the ultrawide lens is the same, the other 12MP is actually a periscope lens that offers 5x optical zoom and up to 50x hybrid zoom.

As for the selfie camera, we’re still looking at the same 10MP sensor. However, you can record videos up to 4K@60fps.

Where the two Notes meet equally is in the sound experience. Tuned by AKG, the stereo speakers should be loud, crisp, and distortion-free even at max volume.

Understandably, Note 20 has a smaller battery at 4300mAh. It supports 25W fast charging, Power Delivery 3.0, and 9W reverse wireless charging. The Note 20 Ultra, though, isn’t too far ahead. The charging rates are the same, with only the 4500mAh capacity being the main difference.