Huawei recently launched its newest set of flagship smartphones, the Mate 20 series. Last month, Apple also released their 2018 iPhone lineup. Now, before we give you the comparison between the new iPhones and the new Mate 20 handsets, let’s first compare the iPhone XS Max to Huawei’s P20 Pro that was released last April. First, the specs sheet:

First off, the displays., The iPhone XS Max features a 6.5-inch OLED display, with a resolution of 1242 x 2688 pixels, and an aspect ratio of 19.5:9. Same with last year’s iPhone X, it has an edge-to-edge screen and yes, the notch is still there. And unlike other smartphones with the same notched display, Apple still hasn’t added a feature to hide it. Just like the older iPhones, the display has a 3D touch feature. By looking at its display, you’d hardly see any differences over the last year’s iPhone.

The Huawei P20 Pro sports a 6.1-inch with a resolution of 1080 x 2244 pixels and has an 18.5:9 aspect ratio. There’s no physical buttons and capacitive keys up front so for navigating, Huawei placed on-screen buttons instead. Just like other smartphones this year, Huawei hopped in the notch trend as well. But unlike the iPhone XS Max, if you’re not a fan of the notch, users can get rid of it and hide the notch. Just go to settings  – type notch on the search bar – and tick the hide notch option.

We tested these two on broad daylight and by turning on to the maximum level of brightness, as expected, the iPhone XS Max and the Huawei P20 Pro passed. There were no problems with the visual experience. The only difference is the display’s color tone.

Media playback, gaming, and web browsing sure is fun with thin bezels and vibrant displays. It’s just a turn-off if you’re not a big fan of the notch while using the new iPhone since again, there’s no way to hide it, unlike the P20 Pro. 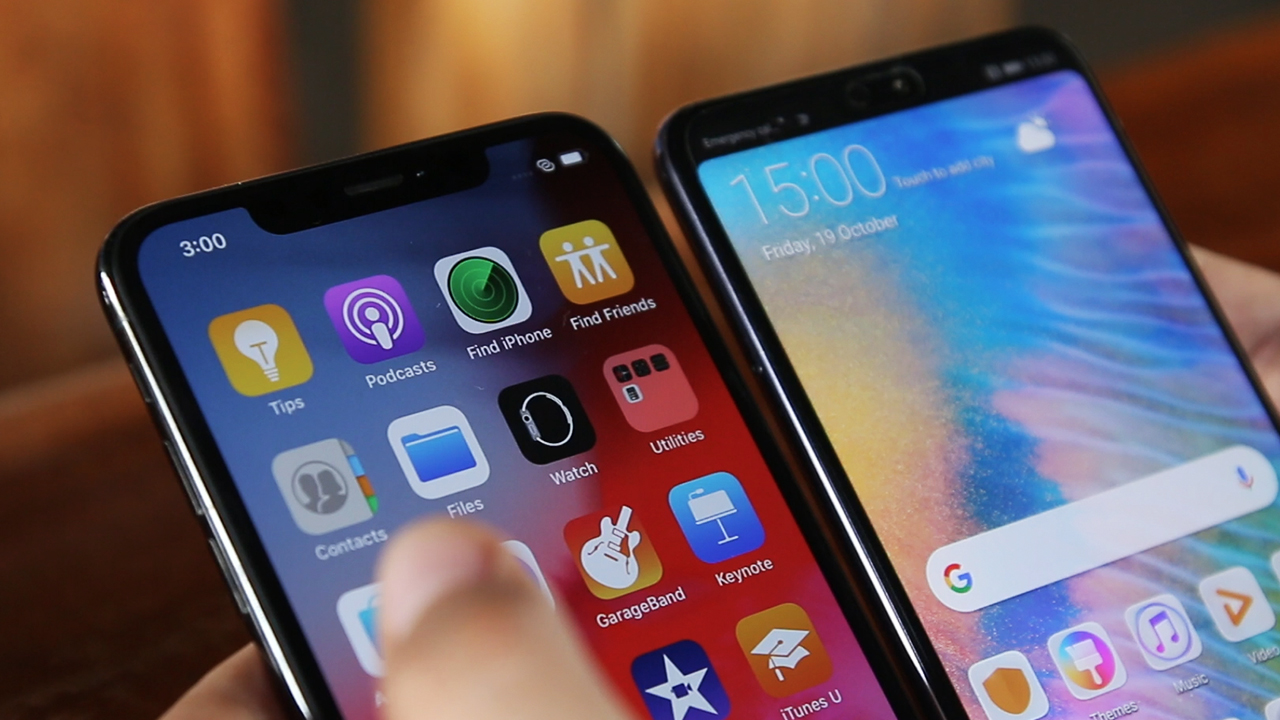 The Huawei P20 Pro’s back and front are covered with Gorilla Glass with a filling of metal at the sides. Going to the back panel of the P20 Pro, it screams “shine” as it bears a stunning glass back that is very shiny and reflective, it can even be used as a mirror. On the other hand, the Apple iPhone XS Max’s body is made of reinforced glass front and back with a stainless steel frame. Going to its dimensions, the bigger 2018 iPhone measures 157.5 x 77.4 x 7.7 mm and weighs 208 g. Again, it still has a notch and no way to hide it. The iPhone XS Max is also IP68 certified for water and dust resistance.

This flagship from Huawei has 3 color variants – the Black, Blue, and Twilight models. All three variants look good but the Twilight variant is on another level. The rear has a beautiful gradient purple- blue with a touch of greenish-turquoise at the bottom that would really pop out. There’s a downside though, the P20 Pro’s stunning rear is prone to fingerprint smudges, so it is best to put on a clear silicon case.

Apple says that the back panel of their new iPhones are made of premium glass that is more scratch resistant than ever. As usual, there’s the Apple logo at the center and the dual rear cameras are placed vertically at the upper left side of the rear. There’s the LED flash underneath the cameras as well.

Switching to the rear of the Huawei handset, there are the vertically positioned triple Leica cameras along with the dual tone LED flash.

In the camera department, the iPhone XS Max has dual cameras, meanwhile, the P20 Pro has triple Leica sensors. Now, let’s head on to their camera samples!

The differences between these sample photos are noticeable. Both photos differ in color representation, vibrancy, and sharpness. The iPhone captured the photo and it depicts the real-life look of the scenario, while the P20 Pro enhanced the overall presentation of the photo instantly through its AI capabilities. Its AI lenses recognized the sky and post-processed it in seconds. Also, a vignette has been added to the photo a well.

Same with the previous sample photos, the photo taken using the iPhone looked natural and colors are accurate, details are sharp and crisp as well. Going to the Huawei P20 Pro shot, the Leica lenses recognized the greenery on the frame and it automatically adjusts the color levels to bring out the “summer” vibes.

Camera results on these handsets are pretty consistent. The iPhone XS Max with its color accuracy and sharpness, and the P20 Pro with its enhanced and post-processed shot.

Taken at the same time and place as the previous shots, but with the 10x zoom enabled. It’s amazing that these handsets can capture clear photos even with the zoom set at 10. Looking at both shots, it’s clear that the P20 Pro captured a clearer photo with 10x zoom than the latter.

Another photo sample set with the 10x zoom, and still, the P20 Pro beats the iPhone XS Max with its hybrid lenses.

Next are photos with the portrait mode on. Looking at the first set, both have strong bokeh effect even if both differ in focal length. Furthermore, the lenses of the Huawei P20 Pro enhanced the photo once again and adjusted the saturation levels. Going to the second photo sample with the portrait mode on, for some reason, the bokeh effect on the iPhone XS Max is stronger than the P20 Pro’s.

In this low-lit shots, the P20 Pro produced a brighter output compared to its contender. However, if you look closely on the objects on each frame, the iPhone XS Max’ shot has more vibrancy and saturation.

Color representation and brightness differ greatly within these two photos. The night shot from the iPhone XS Max has deeper blacks and stronger and higher hues and saturation. Meanwhile, the P20 Pro recognized the night scenery and instantly made the needed adjustments to make it as bright as possible, due to its brightness, details on the clouds are a little visible.

These two flagship smartphones are not just great in taking photos with their respective rear cameras, but with their front snapper as well. As you can see, the iPhone takes the most natural looking selfie, it doesn’t have beautification technology to make the skin of the subject smoother or smaller, which other Android handsets do. The P20 Pro’s selfie camera, on the other hand, has beautification mode if the user wants to beautify their selfies. Both handsets also have great selfie portrait modes.

Similar to the Huawei Mate 10 and Mate 10 Pro, this Huawei flagship also comes with Huawei’s own chipset. It is powered by Hisilicon Kirin 970 – which has AI capabilities. It has 6GB RAM and 128GB of internal storage, which is not expandable. Meanwhile, the newest iPhone XS Max is powered by Apple’s A12 Bionic, which is said to be 40% more powerful than last year’s chipset.  Aside from the new chipset, there’s Apple GPU (4-core graphics) coupled with 4GB of RAM and 3 storage options: 64GB, 256GB, and 512GB. The iPhone XS Max arrives with iOS 12 operating system, which was introduced last June.

These handsets encountered no problems at all when it comes to navigation, running apps, and even playing games. Heavy mobile games run smoothly on both devices even if it’s on the highest frame rate.

We played Asphalt 9, PUBG, and other games and everything went smoothly and the details were crisp as well. The Huawei P20 Pro heated up a little bit while playing Asphalt 9, though. Also, the game lagged a bit when the Bluetooth was turned on. There’s also a feature called GPU Turbo on the Huawei P20 Pro which you’ll get via an update. The changelog says that it will provide a smoother gaming experience and it can be turned on by switching on the game acceleration in the Game Suite app.

Thanks to Apple’s newest chipset, loading up apps is much faster than before. Also, Apple is known for their well-optimized handsets, and navigating on this iPhone with the iOS 12 shows no slowdowns at all. Well, let’s wait for the next OS update and see if there’ll be changes after that. For the meantime, it’s the fastest and most powerful iPhone yet. Another feature of the iPhone XS Max is the Animoji, it was first introduced during the iPhone X launch last year. But with the iOS 12, a Memoji feature was added. It is a little similar to Samsung’s AR Emoji, you can create and customize an emoji, you can even tweak it to look just like yourself.

Going to its security features, the Huawei P20 Pro comes with both a fingerprint sensor and face unlock while the iPhone XS Max only has Face ID. The fingerprint scanner on the Huawei handset works swiftly and accurately. Though the face unlock struggles in dim lighting situations sometimes, it works great as well. It also works even if the user wears eyeglasses, and doesn’t unlock when the eyes are closed. Diving on the iPhone, Apple says that its Face ID is more secure and faster than their previous model, this is quite true but it is still not the fastest and most-accurate Face ID in the market.

The Apple iPhone XS Max is packed with 3174 mAh battery whereas the Huawei P20 Pro has a bigger battery with 4000 mAh.

The Huawei P20 Pro took less than an hour to meet 80% thanks to Huawei SuperCharge. On the other hand, the Apple iPhone XS Max took around an hour and 20 mins to fuel a dead-batt iPhone to 80%.

Both devices were used for casual gaming, web browsing, and media playback. And upon testing, the iPhone XS Max lasted around 22 hours whereas the Huawei P20 Pro survived for 32 hours and 20 minutes. This isn’t surprising as it is equipped with a bigger battery.

The audio quality on the Huawei P20 Pro is great. On maximum volume level though, the treble becomes a little scratchy and harsh on some content. We weren’t surprised that Huawei didn’t include a 3.5mm audio jack for this smartphone but it could’ve been better if they didn’t join the “no-headphone-jack” team. Going to its contender, the iPhone XS Max produces louder audio with its stereo speaker, also not scratchy even in maximum volume.

For the Huawei P20 Pro, it is priced at PHP 44, 990 and is available in three color variants: Black, Blue, and Twilight.

After laying out their similarities, differences, and other components in comparison, which flagship smartphone is for you? Comment down below!