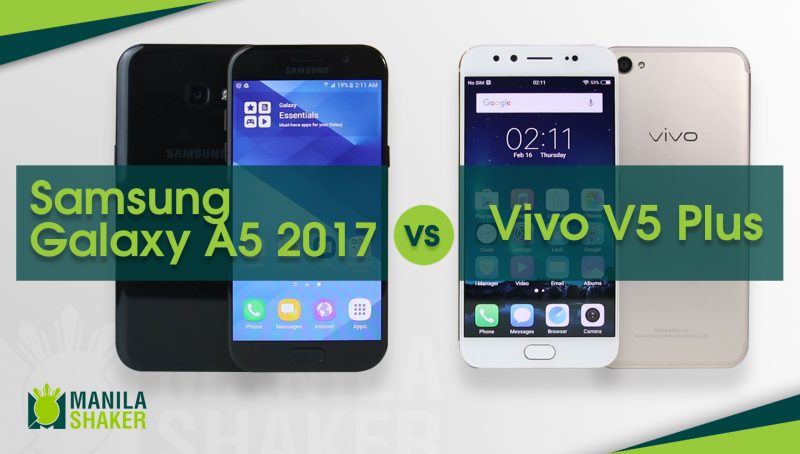 iPhone clone or S7 Edge clone? You decide as we get into the ring for another battle of mid-ranged smartphones.

This is our latest phone-off between the Samsung Galaxy A5 2017 vs the Vivo V5 Plus.

We’re arguably comparing Apples and Oranges here, in this case, a Samsung, as both these phones are mid-tier versions of an iPhone 7 and a Galaxy S7, so to speak.

Samsung is coming in hot into the fight with IP68 rating of dust and water resistance over Vivo’s contender.

It’s a battle of all glass sandwiching and aggressively tapers on the sides towards the metal frame for the Korean contender in stark contrast to a full metal unibody design of the Vivo that curves towards the edges.

Camera placements will be centered for the A5 compared to the left-flushed setup for the V5 Plus.

Headlining for the Vivo V5 Plus will be the dual front facing camera complete with an LED flash on the forehead.

Similar on both fronts will be the home button on the chin that doubles as a fingerprint scanner flanked by capacitive navigation keys.

A dedicated microSD card slot can be found on the top edge of the A5 2017 a feature that is absent on the V5 Plus.

The A5 commands a smaller footprint comparing but does not make the V5 seem gigantic.

Stark differences aside, design will always come down to user preference so we’re letting you decide on this category.

We liked the compact form of the V5 and the matte finish helps with grip. Fingerprint magnet aside, the A5 2017 feels solid and cool to the touch.

As expected on any Samsung phone sporting a 5.2 inch Super AMOLED panel set at 1080p, blacks will show deep blacks and colors are vivid. This is in contrast to the 5.5 inch IPS LCD panel also set at 1080p for the V5 Plus that had a yellowish tone over saturated colors.

It’s a little bit brighter for the output for the V5 Plus if only by a hair but both displays can be viewed under direct sunlight.

It’s a tie this round.

It’s a tie for the rear facing camera for both our contenders with 16MPs in tow set at f1.9 in favor of the A5 2017 compared to f2.0 for the V5 Plus seen here on a take of day-lit images.

It was a touch warmer for the Chinese contender with a hair of saturation in tow compared to the Korean’s version of the same image taken in low light scenario.

The A5 struggled to focus in night shooting seen here compared to better handling for the V5 Plus.

The LED flash aids in shots taken in close proximity.

The V5 Plus pulls ahead in the video recording department that caps off at 4K resolution. But for the purposes of this test we have dialed it down to 1080p.
The absence of both optical and electronic image stabilization will mean steady hands or a gimbal will almost always be required.

More points are earned in the selfie game as the dual 20MP + 8MP front facing shooters of the V5 Plus takes better images overall over the 16MP selfie camera of the A5 2017 sans the coveted bokeh effect.

Samsung did good in the camera test but Vivo was just better.

V5 Plus will take this one.

It’s a battle of Samsung’s proprietary Exynos 7880 paired with 3GB of RAM against the familiar Snapdragon 625 with a more capable 4GB of RAM.

The extra GB of RAM benefited the V5 Plus by a margin of about 3000 Antutu Benchmark points at 62,500 units running the iOS-esque FunTouch OS drawn over Android Marshmallow 6.0. In great contrast to 59,100 points for the A5 2017 running the all too familiar TouchWhiz UI on top of the same Android flavor.

Speedtest and capabilities were tested on both devices while playing games like Real Racing 3 where the experience was just smoother on the V5 Plus compared to the laggy replay on the A5 2017. 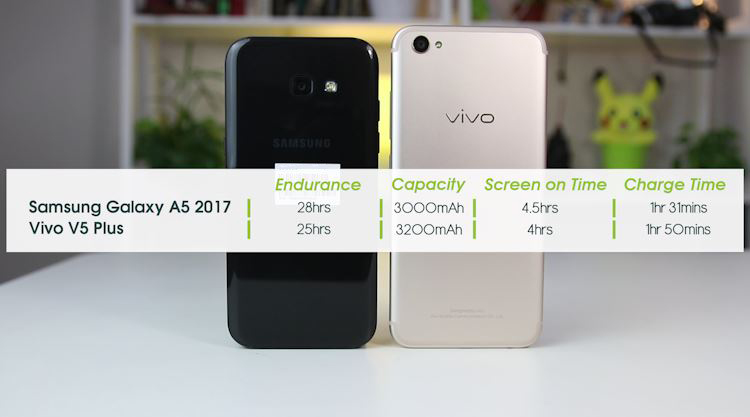 The audio quality was the same for both of our contenders but the side placement of the Galaxy A5 2017 prevents the speaker from being muffled, compared to the bottom-firing version found on the V5 Plus.

To our surprise, only the V5 Plus supports hi-res audio playback through the 3.5mm headphone jack.

The V5 Plus takes this one.

The overall raw capability and camera performance which includes the special dual selfie camera of the V5 Plus was just hard to beat considering the IP68 rating of dust and water resistance in favor of the A5 2017.

If selfies are the name of the game then the V5 Plus should be well within your choices. Otherwise, if water proofing is a factor, then you should have any of the Galaxy A 2017 siblings somewhere on your list.

What do you think of our phone-off this round? Which one won it for you? let us know at the comments section below.