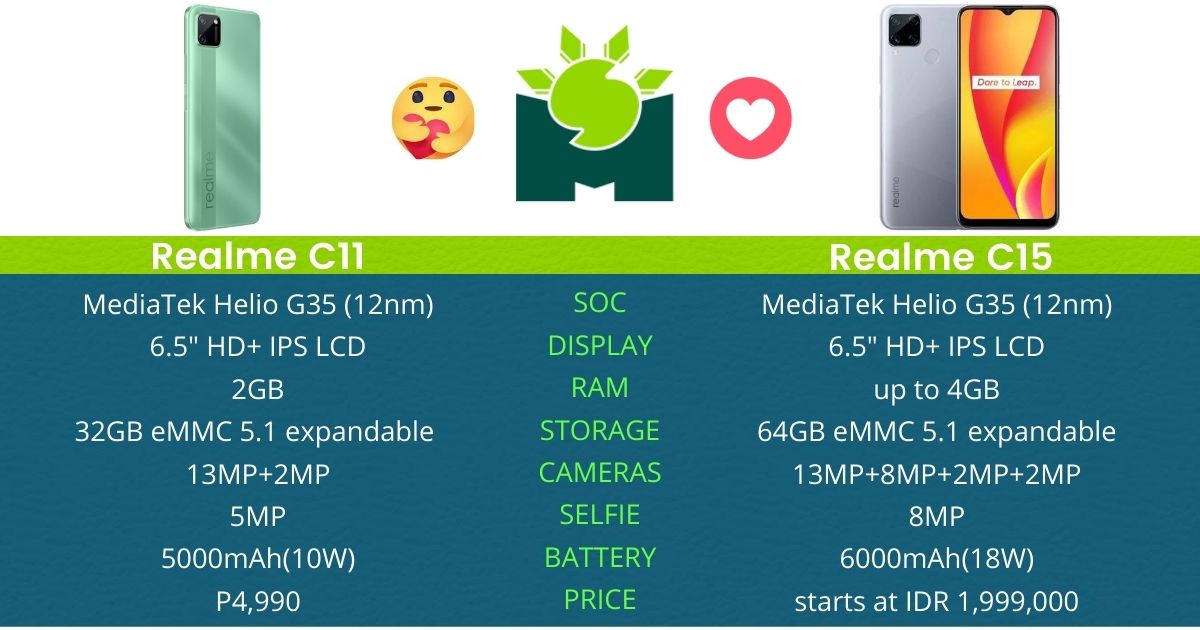 At P4,990, Realme C11 is arguably one of the best cheap phones right now. It packs a decent MediaTek chipset with a massive battery that can last a whole day regardless of usage. However, Realme Indonesia launched Realme C15 with beefier specs and features for almost the same price. In this comparison, we will show you the reasons why you shouldn’t get the C11 right now.

Which is the better buy between the Realme C11 and Realme C15?

If you put the C15 and C11 side-by-side, the C15 will look outdated. Though the geometric pattern helps in making the design more interesting, it lacks a definitive feature that may help it stand out. As opposed to C11, it may have the plain finish but, the smooth strip that runs through the camera module and the large moniker imprint look more exciting. However, we do have to mention that the C15 is one thick phone. Its depth is just 0.22mm short of 10mm. The same goes for the weight at 209g. Durability-wise, the best overall protection for both devices is splash resistance. Based on the tone of the discussion, you know that the C11 wins this one for us.

When it comes to displays, neither of the two makes an effort to be distinct. Both still use teardrop notches with relatively thick chin bezels. Quality-wise, we’re still looking at 6.5″ IPS LCD in a standard 720p+ resolution. The C15 managed to outdo its sibling with the use of Gorilla Glass 3. It may not be the best screen protector, but it’s still protection nevertheless. Obviously, we have the C15 winning this one.

Helio G35 vs Helio G35 — Where Realme clearly cut corners to maintain a relatively affordable price tag is the chipset. If you have the privilege to pick between the C15 and C11, there’s nothing to compare when it comes to performance. Well, at least that’s what we initially thought. At the helm is MediaTek’s Helio G35 that’s good enough for casual usage. But if you want a smoother experience, meaning stutters and lags are not that prominent, the C15 may be able to provide that. Unlike the C11 that comes in a single model of 2GB RAM and 32GB storage, the C15 goes up to 4GB RAM and up to 64GB. Also, both are running Android 10 with Realme UI skin on top. To cap it off, only the C15 features a capacitive fingerprint scanner. You obviously know which wins this round.

Realme C11 features a 13MP main sensor and a 2MP depth lens on the back, which is standard at its price point. It’s expected, and it’s the way it should be. The same goes for the 5MP selfie camera. The C15, on the other end, feels like succeeding the C11. In addition to the 13MP sensor, there are three lenses more to use — 8MP ultrawide, 2MP monochrome, and 2MP retro. We’re not sure how the retro lens works but, our initial guess is filtering. The selfie camera gets a bump too, now at 8MP.

Video-wise, both phones are still capped at [email protected] for front and back. But even then, you can do so much more with the added ultrawide lens on the C15. Thus, making it the winner in this round.

There’s nothing to write home about when it comes to the audio experience. Both are still sporting a mono south-firing speaker, with an audio jack for better sound quality. So, this is the first time we have a tie.

Other than cameras, the battery and charging are two of the biggest upgrades when coming from the C11. From 5000mAh and 10W charging rate, the C15 boosts the experience with a generous 6000mAh and 18W fast charging. Do take note though that you’re still stuck with Micro USB, whichever you pick.

With every single feature out of the way, we now have the prices to compare. In the Philippines, Realme C11 is available at P4,990. It gets you 2GB/32GB already. While Realme C15 is on sale in Indonesia (for now), its prices look like this:

With taxes and duties, the prices are bound to go up if Realme C15 ever arrives locally. But if that happens, we are almost sure that it’ll replace Realme 5i that currently retails for P6,990.