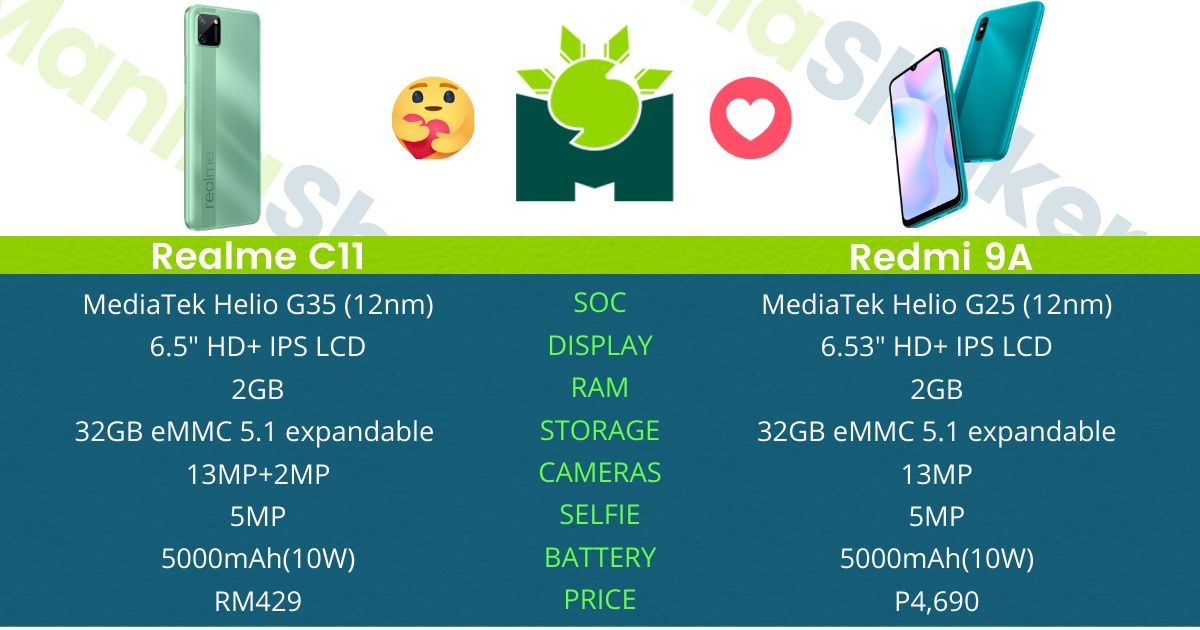 Though the year began with brands releasing mid-range smartphones, it’s finally good to see cheap phones in the second quarter. Xiaomi recently made the Redmi 9A available in the country, while Realme C11 is definitely going to launch very soon. But if we’re to assume Realme C11 launching under P5,000 (because that’s the only way for it to be competitive versus Redmi 9A at P4,690), then which should you get?

Realme C11 and Redmi 9A Similarities and Differences

Which is the better buy between the Realme C11 and Redmi 9A?

When it comes to design, Redmi 9A and Realme C11 look identical. If not for the camera module, we would’ve mistaken the two from the same brand. From the back of things, both come with a single striped running towards the bottom along with the cameras. However, the moniker of C11 looks a lot more “belong” than 9A. Realme’s Geometric Art Design comes in two colors — mint green and pepper grey. On the other hand, Xiaomi’s textured design comes in more options — peacock green, granite grey, and sky blue. Both clock in at 194-196g, so expect some heft to them. We do think Realme C11 has the more polished design here and, we like that it’s a bit narrower than Redmi 9A, making it easy to grip; thus, winning this round.

For the display, we’re still looking at 6.5″ HD+ IPS LCDs. The small teardrop notch is still here as well. Both are in a 20:9 aspect ratio, making them a tall phone to use. We’re not sure how bright the display of C11 is, but Redmi 9A is listed with 400 nits of typical brightness. Neither has an outstanding feature here, so we’re giving it a tie.

Helio G35 vs Helio G25 — for the first time, Realme has the advantage in chipset when comparing cheap phones. Realme C11 is packing Helio G35 from MediaTek which offers slightly overclocked octa-core CPU versus Redmi 9A’s Helio G25. The same goes for the PowerVR GE8320 GPU clocked at 680MHz vs 650MHz, respectively. On paper, the more powerful chipset provides up to 10% more performance. Both phones, however, are paired with 2GB RAM and 32GB storage. Unfortunately, there’s no capacitive fingerprint scanner on either device. They do have a less secure face unlock. Also, Redmi 9A still features an infrared port that allows it to act as a remote for supported appliances.

With entry-level SoCs, every inch of performance matters. MIUI 12 is the most optimized skin yet from Xiaomi but, we’re not sure yet how it performs with cheap phones. Realme UI, on the other hand, has no problem with weaker SoCs — all thanks to the near-stock experience. Nevertheless, this one boils down to user preference. However, we can’t ignore the slight advantage of Realme C11, making it the winner for this round.

Both are rocking 13MP main sensor and 5MP selfie camera. Realme C11 stands out with its addition of a 2MP depth lens on the back. In theory, this should provide a better portrait mode. But sometimes, the software handles the background/foreground trickery for the most part. Where the Redmi 9A stands out, however, is 60fps recording at 1080p. We’re honestly surprised to see that feature on a cheap phone. Hopefully, the quality isn’t garbage, though. For the selfie camera, you might be able to get more people into shot due to the 27mm focal length.

In this case, we feel like 60fps is more fun and usable versus a 2MP depth lens. With that in mind, we have the Redmi 9A winning this one.

Both phones are sporting south-firing speaker, alongside an audio jack. We do like the fact that Realme C11 supports aptX codec, meaning you may be able to get better sound quality over Bluetooth audio accessories versus Redmi 9A. As you may have expected, Realme wins this one.

It seems like we have another tie when it comes to battery. With 5000mAh, you can get up to two days worth of battery life. Unfortunately, you’re still stuck with 10W micro-USB chargers. Topping up means waiting for more than 3 hours just to get from zero to 100%.

Redmi 9A is currently priced at P4,690 and goes as low as P4,590 if you can snag a discount. Realme C11 is only available in Malaysia for now at RM429 or around P5,000 when roughly converted to Philippine peso. If the company managed to bring Realme X3 SuperZoom at a very affordable price, what more if it’s the C11. If you’re choosing between the two, we think it’s going to come down to the official prices and your budget. After all, both phones are nearly equal in the spec sheets.

Join Nadine Lustre and More for the OPPO Reno4 Launch on...