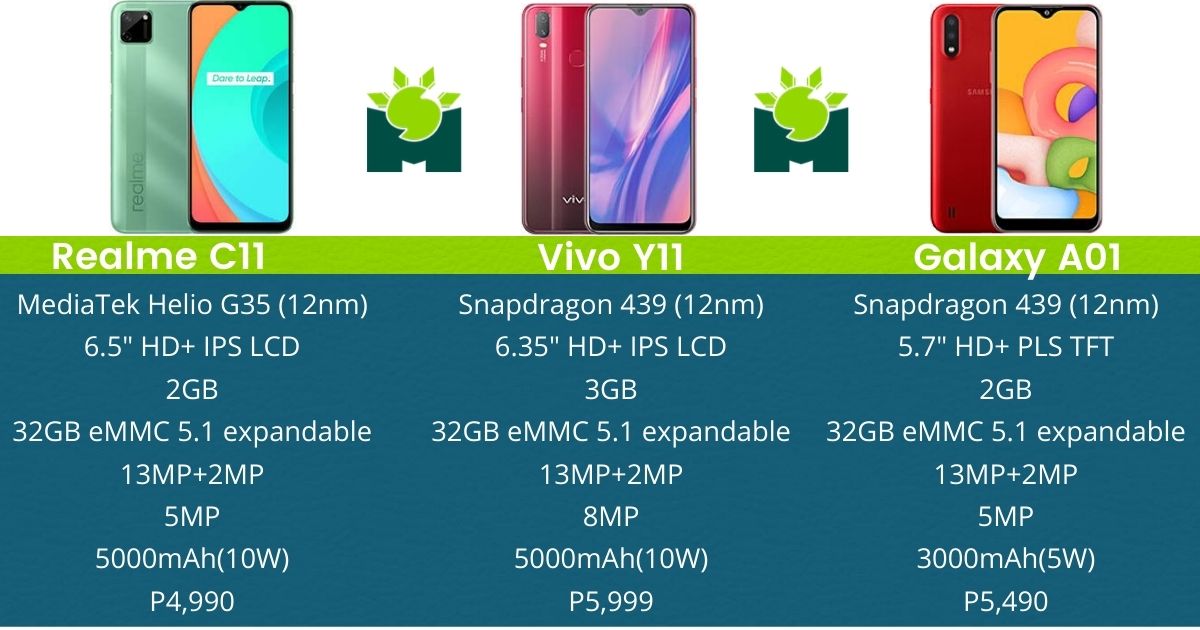 Now that Realme C11 is officially in the Philippines for P4,990, how does it stack up against the competition, particularly with Vivo Y11 that retails for P6,499(previously P5,999) and Samsung Galaxy A01 for P5,490? Find out their similarities and differences in this specs comparison!

What are the similarities between the three cheap phones?

As always, let’s start the similar features each three has.

All three are technically using the same IPS LCD with HD+ or 720p resolution. The same goes for the teardrop notches in varying sizes. If you’re looking for the best cameras on a cheap phone, you’ll have to look elsewhere as the C11, Y11, and Galaxy A01 sport 13MP sensor and 2MP depth lens for the back cameras. For their build and design, all three are of polycarbonate material, with the Y11 standing out a little due to its glossy finish. As for the rest, they have a MicroSD slot for expansion, decent Wi-Fi modem, audio jack, and 10W charger via MicroUSB (5W for Samsung, tho).

Now, what about their differences?

Obviously, most of you will pick Realme C11 since it’s the latest one. But aside from that, Realme’s latest budget phone has the biggest screen out of the three. It clocks in at 6.5″ which is the standard size in 2020. Though the resolution is not high definition, it should help you in maximizing the whopping 5000mAh battery. For the performance, it’s the only phone running on Helio G35 chipset. Some may not like MediaTek’s SoC but, the company has done a great job this year to keep itself competitive. Also, when you have Realme UI, the specs almost always don’t matter. Do take note though that you’re going to be dealing with 2GB RAM. The 5MP selfie camera isn’t the best in quality but, it has 27mm focal length for a wide field-of-view. Lastly, Bluetooth 5.0 is present alongside aptX codec. In theory, using any wireless audio accessory should have better playback quality than the two.

Vivo Y11 arguably has the catchiest look out of the three, solely because it’s shiny. However, unlike the other two, it features a rear-capacitive fingerprint scanner. While face unlock is present, it’s not as secure as having a dedicated biometric device. If there’s a reason to get the Y11, it’s probably that. So, what about the rest?

Vivo’s nearly one-year-old phone has a smaller build thanks to the 6.35″ 720p+ display. It’s not as tall as the C11 but, it’s not the smaller phone compared to the Galaxy A01. At the core is the Snapdragon 429 — based on the same process node as the Helio G35 — 12nm. While it boasts efficiency, it’s not as good as its MediaTek counterpart in most latest games. Another area the Y11 shines is in its 8MP selfie camera. On paper, it should provide you crisper selfies, complete with Vivo’s vast array of beautification setting.

Given Vivo Y11 is the oldest phone here, it still runs on FuncTouch 9.1 based on Android 9 Pie.

Why Choose Samsung Galaxy A01? 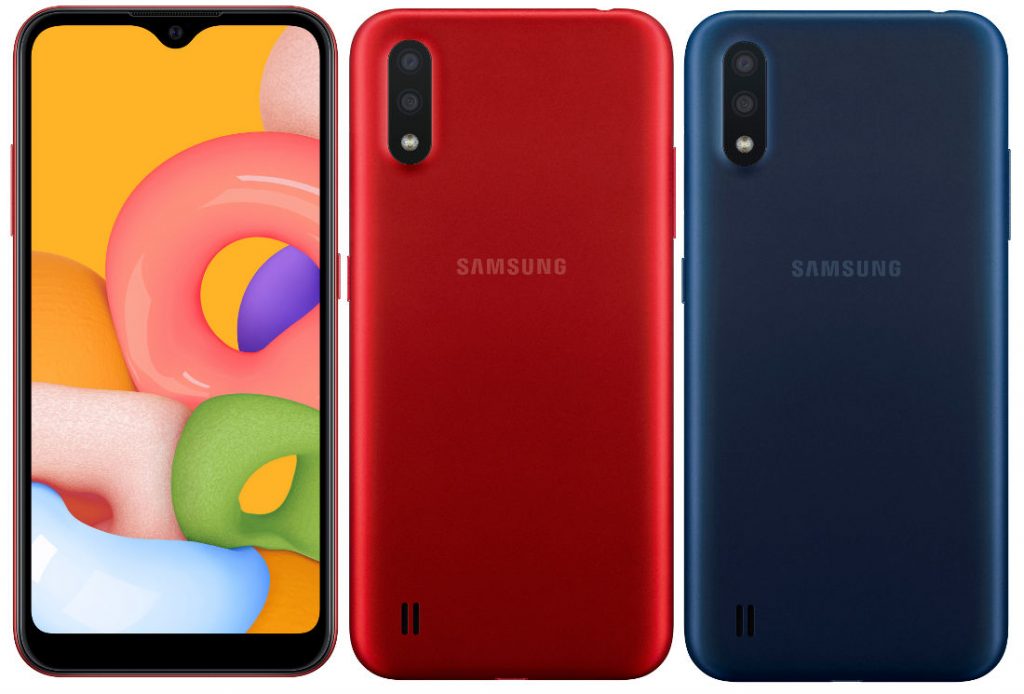 As for Samsung Galaxy A01, it’s the lightest and smallest phone of the bunch. It only weighs 149g and is 8.33mm thin. Though some may see the 5.7″ display smaller, a few may find it favorable, especially those with tiny hands. Running the same Snapdragon 439 chipset, the software version is more updated, thanks to One UI 2.0 based on Android 10. The downside, though, is the small internal storage, as you’re going to be stuck with 16GB only. Much like Realme C11, there’s a 5MP selfie camera, albeit with narrower field-of-view. One thing to take note of when choosing the Galaxy A01 is the small battery capacity at only 3000mAh.

Even with minor upgrades, Realme C11 still gets the cake when it comes to the best phone between the three. It has a large display that adheres to modern standards, and the chipset offers improvements in gaming. However, Vivo Y11 is a close second with its smaller footprint. It even has a fingerprint scanner. But then again, some may find the P5,999 price tag to be a tough pill to swallow. As for the Galaxy A01, you shouldn’t be getting it for any reason.