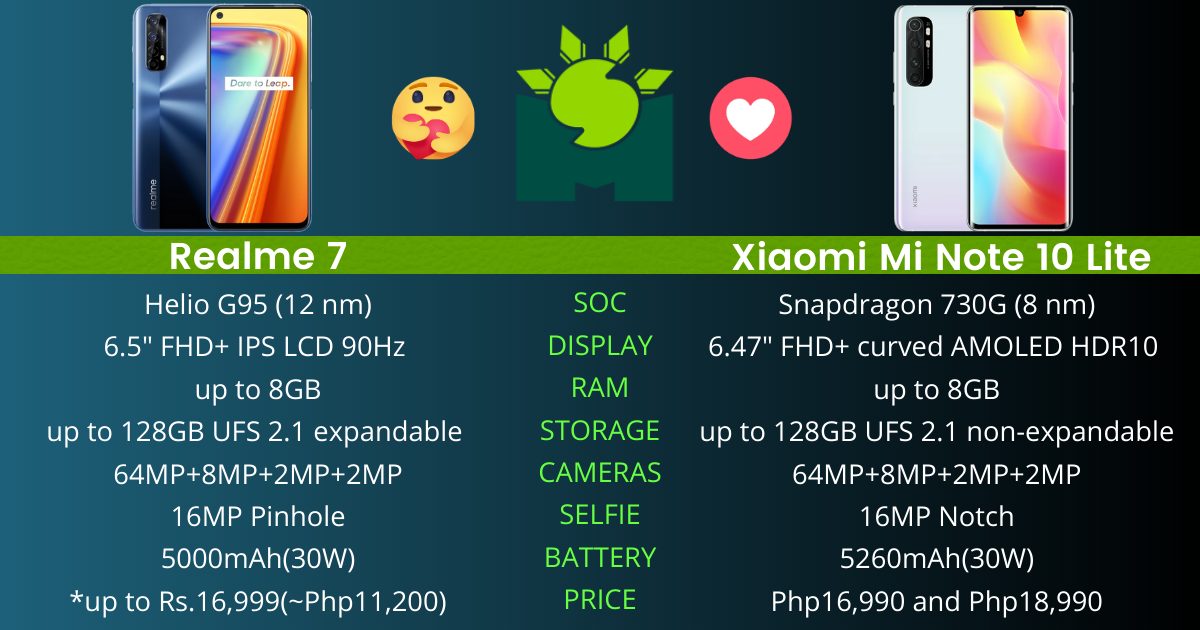 Buying the best bang-for-the-buck phone only means one thing — choosing from either Realme or Xiaomi’s arsenal. Considering the price of Realme 6, some of you might say that comparing its successor to Mi Note 10 Lite would be unfair. But given the price increase of Realme 7 in India, our gut tells us that its official SRP in the Philippines might make the Mi Note 10 Lite as its closest competition.

Which is the better buy between the Realme 7 and Xiaomi Mi Note 10 Lite?

We can’t deny the fact that the Mi Note 10 Lite looks and feels good, thanks to its glass-metal-glass build. It’s only one of the few devices left with this kind of material, with most manufacturers switching to plastic to cut expenses. Unfortunately, this is the same for the Realme 7. However, the two-tone finish on the back might feel better to some due to its slippery, matte finish. Hopefully, it wouldn’t attract fingerprints as much as a glass phone. Though Realme 7 has increased its battery capacity, it’s still the thinner and lighter phone in this comparison. And despite that the Mi Note 10 Lite being protected by Gorilla Glass 5, glass still shatters easily than plastic. Whether you like the plastic build or glass is up to you.

Each device comes with its specialties when it comes to the display. With the Realme 7, the slightly larger 6.5″ IPS LCD boasts a fast 90Hz refresh rate. Even with the slightly upgraded CPU, the experience is perceivably faster when coming from a 60Hz phone. For the Mi Note 10 Lite, it doesn’t have the fancy refresh rate, but it comes equipped with AMOLED that supports HDR10 playback. The screen may not be as fast; however, the color quality and brightness level are better. For what it’s worth, both sides of the display are curved toward the edges for a more premium look and feel. Additionally, there’s an in-display scanner.

Much like the design, it’s up to you whether you prefer 90Hz or curved AMOLED.

Helio G95 vs Snapdragon 730G – Realme 7’s Helio G95 isn’t exactly a huge upgrade over the G90T. Not even MediaTek called it as the successor of the older chipset. Instead, it just carries about an 8% performance boost in GPU synthetic benchmarks. As for the Snapdragon 730G on the Mi Note 10 Lite, though as equally as capable as the G95, its power efficiency keeps itself ahead of this comparison. Both models are paired with either 6GB/64GB and 8GB/128GB, except for Xiaomi’s phone unable to support a microSD card.

We can’t speak yet on the performance of the G95. However, Qualcomm’s chipset is undeniably the more futureproofed one here due to its 8nm process node compared to the 12nm of the MediaTek counterpart. With that in mind, we have the Mi Note 10 Lite winning this category by a hair.

READ: Realme 6 vs Realme 7 Specs Comparison – Pricier, But Is It Better?

With both devices using the same quad-camera setup and main sensor, the difference will come down to their respective post-processing. Though the Realme 6 disappointed us with its lackluster photo/video output, the new Sony 64MP sensor on the Realme 7 seems to be promising, based on first camera samples. While video recording still hits up to 4K@30fps, we still have our reservations when it comes to how MediaTek’s ISP handles information. In the case of Mi Note 10 Lite, it’s easily one of, if not, the best cameras at its price point.

Interestingly, the same story can be shared with the 16MP selfie cameras. Though, some of you might prefer the pinhole cutout on the Realme 7 over the teardrop notch on the Mi Note 10 Lite. On top of that, Realme listed its device with support of up to 120fps recording, making for slow-mo video selfies.

While Realme 7 appears to have the advantage in selfies, Mi Note 10 Lite still reigns when it comes to main cameras. That is, of course, until we compare them side-by-side. Our full review of Realme 7 is coming soon. But for now, we’re giving this one a tie.

Both phones are still using mono, south-firing speaker, and an audio jack. Mi Note 10 Lite, however, can playback high-resolution music files for a better audio experience. With that in mind, Xiaomi wins this category.

With the bigger capacity and more efficient chipset than Realme 7, Mi Note 10 Lite wins this round.

While Xiaomi Mi Note 10 Lite is available for purchase in the Philippines already, we’re still waiting for Realme 7 to become official. For now, we’re going to use the prices from India for comparison.

Thanks to the battery and camera upgrades on Realme 7, its spec sheet can even match up Xiaomi’s Mi Note 10 Lite, which is one of the best value mid-range phones right now. Given how much Realme 6 launched in the country, there’s a good chance that the successor could cost reasonably. But if Realme 7 closes the price gap on the Mi Note 10 Lite, would you still consider it as your phone of choice?

Xiaomi Replaces Apple as the Third Biggest Smartphone Vendor in the...