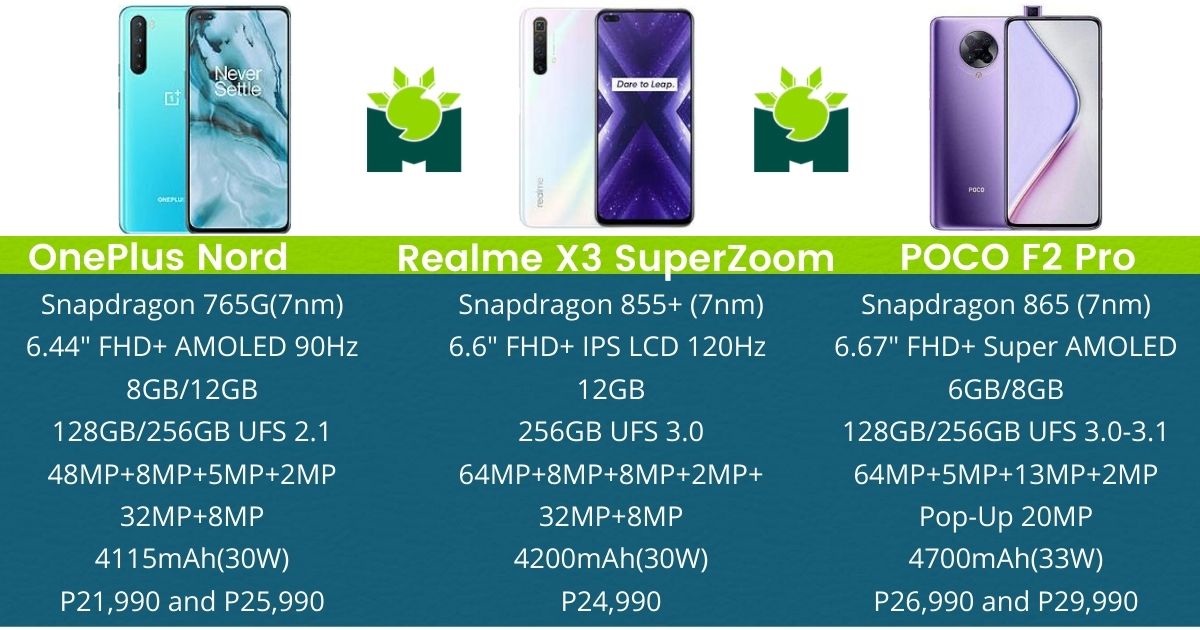 In the Philippines, there are two flagship killers on the market at the moment — Realme X3 SuperZoom and POCO F2 Pro. Both are packing top-end chipsets that can easily match up against more expensive flagship phones. However, OnePlus Nord launched a few days ago. It may not be as powerful as the two phones but, is “well-balanced spec sheet” enough to make you consider it as an option in this comparison? With OnePlus now an established company that competes against the likes of Samsung and Apple, does it still have what it takes to take on the mid-range market?

When it comes to materials used to build the phones, all three sport glass backing with metal frames. Again, all of them are using Gorilla Glass 5; however, Realme X3 SuperZoom lags with its plastic framing, regular glass back, and bigger chin bezel. Along with POCO F2 Pro, the two are thickest slabs at 8.9mm with a combined 421g weight (202g and 219g). Even with the large footprint, neither of three supports a MicroSD slot for storage expansion. If you want the smallest phone between the three, OnePlus Nord is the one. It’s only 8.22mm thick and weighs 184g, which should allow for extended usage without feeling hand strain.

While OnePlus Nord and X3 SuperZoom feature dual-selfie cameras, POCO F2 Pro stands out thanks to a pop-up selfie. As for their main cameras, all three are using a quad-cam setup with different sensors and lenses.

If there’s one “true” similarity between the three, that’s the 30W fast charging technology.

Realme X3 SuperZoom may be using the oldest chipset out of the three, but the Snapdragon 855+ is more powerful than the Snapdragon 765G, especially in graphic-intensive apps. The 6.6″ FHD+ 120Hz also provides the fastest perceived experience, thanks to the doubled refresh rate. However, do take note that it’s still using IPS LCD, which means colors are not as attractive to regular eyes.

Though you lose the ability to expand storage, you probably don’t need it when picking up the X3 SuperZoom. The only available model already packs a massive 12GB RAM alongside 256GB UFS 3.0 storage. It should keep the device running smoothly for at least three years. On top of that, Realme UI is the closest thing to Oxygen OS. It looks near-stock but with an ample amount of customization and features.

If you’re looking for the best cameras out of the three, look no further than Realme’s flagship killer. The 64MP main sensor is more than capable of capturing incredibly-detailed images. You can even take photos of the Milky Way with the dedicated Starry Mode. But what really makes the X3 SuperZoom the best is the lenses. Aside from the standard 8MP ultrawide, the 8MP periscope lens lets you zoom in 5x optically and up to 60x digitally. And when it comes to the selfie cameras, you now have the option to capture with the 8MP ultrawide lens.

Nothing can beat the POCO F2 Pro in this comparison if we’re talking about features and raw performance. It packs the newer Snapdragon 865 with a 5G modem in tow. It’s the perfect smartphone for those who’re looking to keep it for at least a few years, without a little-to-no performance hit, until 5G hits the mainstream. POCO also gives you the option to go for 6GB/128GB or 8GB/256GB, depending on your budget.

Thanks to the chipset, it’s the only phone out of the three that can record up to 8K resolution. Additionally, 4K goes up to 60fps, with FHD at up to 960fps for ultra slo-mo. Some may even see the F2 Pro as the best video camera in this comparison. Outside video, it still features a 64MP sensor, 5MP telephoto lens that doubles as a macro, 13MP ultrawide, and 2MP depth. Though there’s only one 20MP selfie camera, not a lot of phones today offer a truly full-screen experience.

Some bonus features to get here are Wi-Fi 6, Bluetooth 5.1 with aptX HD (and Adaptive) codec, infrared port, and a headphone jack!!! Oh, unlike X3 SuperZoom, the 6.67″ display is of Super AMOLED, complete with HDR10+ certification. In other words, colors look great and the brightness level is very high. Lastly, POCO F2 Pro has the biggest battery at 4700mAh. Combined with the 60Hz display, this phone may just be the longest-lasting out of the selection.

OnePlus Nord may be the least expensive of the three but that’s at the expense of raw performance. However, you shouldn’t underestimate the Snapdragon 765G’s capabilities. First, it has a 5G modem like the Snapdragon 865. Second, it’s almost as capable as the Snapdragon 845, which is still a powerful chipset two years since its release. Third, it doesn’t consume as much battery as the other two chipsets. If we’re to put the Nord in a few words, it’s a Jack of all trades.

OnePlus’ Fluid AMOLED that debuted on the 7 Pro is now on the Nord. At 6.44″, the tall 20:9 display supports 90Hz refresh rate and HDR10+ playback. Combine that with Oxygen OS’ optimization, you have the smoothest and most reliable software experience between the three devices. On top of that, you’re guaranteed with up to 3 years of security patches and up to 2 years of major Android upgrades. In a nutshell, it’ll keep the phone secure from malicious attacks while providing new features introduced by Google.

So, what else? The quad-cameras provide usable 48MP sensor and 8MP ultrawide, with 5MP depth and 2MP macro completing the experience. Though the spec sheet seems underwhelming, OnePlus is generous to include OIS for video stability. Unlike EIS, it’s smoother and more natural when implemented on videos. As for the selfie cameras, it’s carrying the same optics as X3 SuperZoom — 32MP+8MP — but with video recording in 4K resolution is possible. Something POCO F2 Pro can’t even offer.

Which is the best phone?

While we think all three are worth getting, you have to steer away from a couple of models. OnePlus Nord’s base model is a good buy for the price of P21,990; however, the top model that costs P25,990 is a hard sell (the same story can be said, with the top model of F2 Pro). Take note that the Nord is still using a mid-range chipset with cameras that belong to OnePlus 7’s generation. Spending more, the POCO F2 Pro’s base model seems like a better deal, as well as Realme X3 SuperZoom.