Nokia is finally entering the competition in the smartphone industry by coming back with a whole new lineup that suits the modern taste of consumers.

The HMD Global launched the Nokia 7 Plus here in the Philippines on mid-April this year equipped with a set of good specs and interesting features.

Now, we finally get our hands to Nokia 7 Plus we’ll test and see if this is a worthy smartphone for you.

The Nokia 7 Plus is built in front glass and aluminum body with orange metal at the sides, around the rounded vertically aligned dual camera setup with LED flash and fingerprint scanner. The Nokia branding is also written in an orange tone which complements with the black panel. There’s also a written ‘android one’ at the bottom.

Going to the bottom is the USB 2.0 port, speaker grille, and microphone. Physical buttons are located at left with volume rockers and power button while the opposite side has SIM tray. And lastly, at the top is the headphone jack which we appreciated since manufacturers are starting to ditch this feature.

Overall, the phone looked slick and modern. We’d like to commend Nokia for executing such design, we can see that one of the oldest smartphone manufacturers are trying to keep up with modern designs. 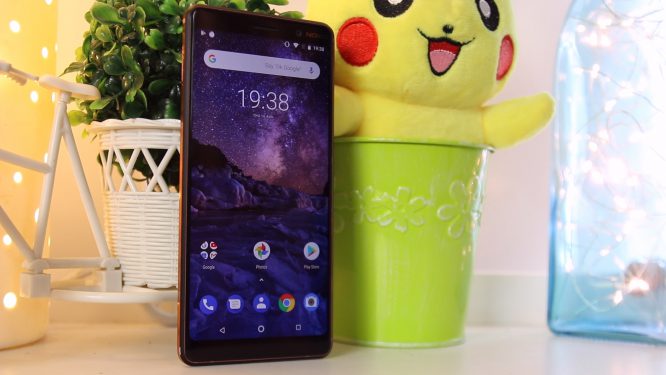 The Nokia 7 Plus features a 6.0-inch IPS LCD display with a screen resolution of 1080 x 2160 pixels and an aspect ratio of 18:9 protected by Corning Gorilla Glass 3.

The screen may not be the vibrant as compared to other flagship phones but what compensated with the display is the smartphone’s interface that looks neat which looks pleasing as we scroll through the Nokia 7 Plus.

We also took out the phone and tested if this won’t encounter any problems under broad daylight and with maximum brightness level, the screen will be visible.

However, unlike any other smartphone that was released this year, Nokia 7 Plus didn’t provide an option where we can fully customize the color and contrast of the screen. Only the night light which decreases the blue tone on the screen for visual comfort especially for those who want to sleep and read easily. (Settings > Display > Night Light)

On this outdoor shot, the color was vibrant however still is close to its accurate color. With a combination of good lighting, nice environment and a dual 12MP + 13MP rear camera it resulted in a good quality photo. Despite that, we noticed the sky weren’t clear as compared to other subjects.

Aside from the vibrant colors, what we can observe in this photo is the details and how Nokia 7 Plus has clearly captured a moving object in an auto mode which is impressive for a rear camera.

Photos on low-light seem to be the one of Nokia 7 Plus’ struggle. However, here, it made it look like the photo has this eerie atmosphere which is not a bad thing since it could be an Instagram-worthy photo.

While low-light is a struggle for this smartphone, color and details are perhaps Nokia 7 Plus’ strength as it clearly shows the texture of popsicle sticks.

With additional lighting, the colors and details stood out as the HDR mode was also used. Thanks to this mode, the light beside the subject didn’t scatter. You know that Nokia is stepping up their smartphone game giving us some quality photos on their Nokia 7 Plus.

With almost the same judgment as to the photo above, lights were not scattered. Even though Nokia 7 Plus takes a vibrant photo, it manages to not overdo it considering the colored lightings around.

Going to the selfies, what we noticed is that there’s softness in the photos even without the beauty mode or any enhancement added. Comparing the two, you won’t notice that the 2nd photo was enhanced with Beauty mode because of the subtleness. This is something we always complement because looking artificially enhanced on a photo doesn’t look pleasing as compared to looking more natural.

Looking at this photo at a short distance, you won’t quickly notice the blur at the background. However, this could be a good thing since it’s not overdone and also a bad thing because of the lack of sharpness. But still, it will always up to your own perspective on which looks better.

Lastly, Nokia boasts their very own “Bothie” where it allows us to take a photo on the front and back at the same time.

The Nokia 7 Plus is powered by Qualcomm Snapdragon 660 coupled with Adreno 512 GPU that carries 4 GB of RAM paired with 64 GB storage expandable up to 256 via micro SD card. It also runs on Android 8.1 Oreo.

For Nokia 7 Plus’ security features, it only offers the fingerprint scanner except the basics. We tested its speed and the response wasn’t as fast as this phone’s competitors. It’s neither fast or slow so this can be tolerable.

We played and tested high graphics games such as Asphalt 9 and Arena of Valor. Gaming experience is decent and smooth, lags were not encountered during the game.

We tested the Nokia 7 Plus using the following benchmarking tools and here are the results:

The Nokia 7 Plus is fueled by a 3, 800 mAh battery. It lasted for 27 hours of casual web and social media browsing with light gaming and media playback to drain the phone. This handset took exactly 20 minutes to 30% and exactly 2 hours to fully charge the phone into 100%.

What we noticed on playing varieties of music on this device is that it doesn’t always make the loudest and clearest sound, especially on outdoors. So you may want to use a speaker to clearly hear what’s playing. However, it sounds decent indoors and doesn’t sound scratchy on a maximum level.

The Nokia 7 Plus is a flagship smartphone that can be your choice, however, there are other smartphones that better choice in this price range.

Even though this might not be the best in its category, it still provides its user with a good gaming experience, and swift social media and web browsing.

The Nokia 7 Plus is available in colors – Black/Copper and a White/Copper for the standard price of PHP 21, 990.