The LG-branded Nexus 5X is a new budget phone sporting a mid-range hardware and latest Android 6.0 Marshmallow OS. Costing at around $400, will it par the 6-month old LG G4 flagship in different categories? Let’s find out in our Ultimate Comparison. 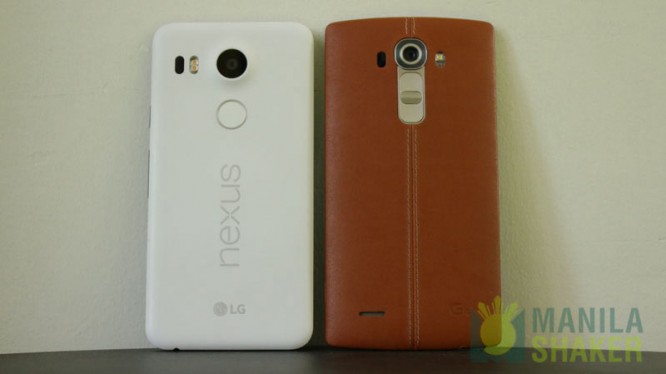 With a plastic body and slender profile, the Nexus 5X is more comfortable both in the hand and pocket. It’s lighter and thinner than the 5.5-incher LG G4 and it features latest USB Type-C and an accurate fingerprint sensor. But in the looks department, noticeably, the leather-made and curved screen of LG G4 wins our votes.

Surprisingly, as a budget device, the Nexus 5X packs high calibre 5.2-inch IPS display with 1080p resolution and 424 ppi that’s sharp, bright and clear. However, the high-end LG G4 still has better viewing experience, thanks to its 5.5-inch 1440p IPS display; colors are punchier and the brightness is blinding.

Camera in still and video

For a mid-ranger specs, the Nexus 5X did pretty well in producing natural and pleasing colors on its images shot from its 12.3MP main snapper. But again, it is still no match to the 16MP main shooter of LG G4 with better detail preservation, noise handling in low light and night, and exposure control. The goes to the FHD videos we’ve compared where LG G4 showed a slightly better recording than 5X.

The two phones are powered by the same hexa-core Snapdragon 808 chipset. LG G4 has an edge on this area because of the 3GB of RAM compared to the 2GB on Nexus 5X. Performance and benchmark scores are close with a marginal difference. On actual speed test, LG G4 loaded up the game slightly faster.

Packed with the 3000mAh battery, LG G4 lasted 9 hours and 45 minutes in the standard battery test. In contrast, the 2700mAh-equipped Nexus 5X hung in for 9 hours and 20 minutes. It is worth mentioning, that Nexus 5X supports quick charging thru its type-c port and 3A wall charger. Estimated charging speed is 25% for 10minutes.

Both are sporting mono speaker; rear-facing on G4 while front-facing on Nexus 5X. In terms of volume and bass power, G4 has stronger lows and clearer vocals. Loudspeaker output in Nexus 5x is slightly tinny, but overall quality is average.

The biggest advantage of Nexus 5X over LG G4 is the price. For $400, you will still get the same value from the LG G4 that is worth around $600 price (Php 22k-27k in the Philippines). Not only that, Nexus 5X runs on Android 6.0 and it will be one of the first to receive future software updates from Google.

If you’re planning to get the LG G4, surely, you won’t regret this device. It has an excellent camera and superb display, all worth checking out for.