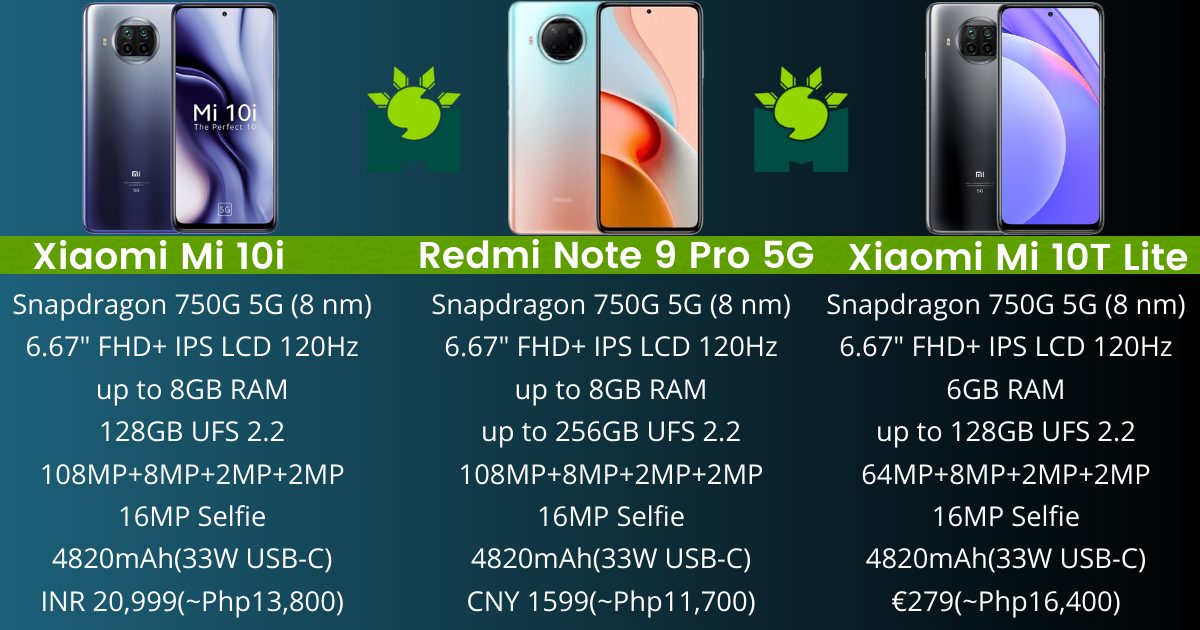 For the past three months or so, we’ve seen three incredibly priced mid-range phones launched in China and other parts of the world. It started with the Xiaomi Mi 10T Lite back in October, followed by the headline-grabbing Redmi Note 9 Pro 5G last December, and then the Xiaomi Mi 10i 5G that just got announced this week. If you’ve been following tech news lately, you’ve probably seen all three in images and noticed almost no difference. However, there are some key specs that separate one over the over.

Talking about the similarities of the Mi 10i, Redmi Note 9 Pro 5G, and Mi 10T Lite, the short answer is — everything.

Aside from the design and look, all three handsets are using Snapdragon 750G chipset that allows for 5G to be accessible to more consumers at a low price. There’s also no “the one is better than the other” when it comes to performance as all three, again, run on MIUI 12 based on Android 10.

The same goes for the 6.67″ IPS LCD, sporting FHD+ resolution and an adaptive 120Hz refresh rate. The only phone that can match up to that screen is the POCO X3 NFC, but I digress.

From the stereo speaker setup to the 16MP selfie camera and 4820mAh battery with a 33W fast charger, these can be found across the three handsets. That also includes the IP53 rating for water resistance.

If that’s the case, is there even a difference here? Like we’ve mentioned earlier, there is a difference.

Because Xiaomi Mi 10T Lite got announced way back in October 2020, it’s still using a 64MP sensor. If you compare that to the 108MP of the two handsets, that’s a huge difference. But one thing to take note of is the fact that the Mi 10T Lite is using a Sony IMX682 sensor. In case you didn’t know, Sony sensors are almost always desired over their Samsung counterparts. The reason for that is because of the lower signal-to-noise ratio, better colors, and contrast.

Obviously, the Samsung HM2 108MP ISOCELL sensor is already on its second iteration, bringing significant improvements such as better autofocus, sharper details, and just a better overall performer than last year’s 108MP. But despite all of that, it’s video capability is still up to [email protected] No option for 60fps. Still.

Comparing the 108MP and 64MP sensors aren’t an apples-to-apples comparison, but it’s worth pointing out for those who are keen when it comes to the technical spec sheet.

Another difference is the availability of these devices — the Mi 10T Lite launched for the European region while the Redmi Note 9 Pro 5G for China. Xiaomi Mi 10i, which is reported to be “Made in India,” is reserved exclusively for India. For now.

It’s tough to tell which of the three could arrive in the Philippines, as Xiaomi has already brought the Mi 10T and Mi 10T Pro in the country. The same goes for the Redmi Note 9 Pro. Assuming the Mi 10i isn’t leaving India, which of the two handsets would you prefer to purchase?

Another interesting thing to point out is how these devices are priced under Php15,000 when comparing rough conversions of their global prices. It appears that that price point is going to be the battleground of affordable 5G phones in 2021.

We just saw OnePlus Nord N10 hitting store shelves today along with a price tag of Php14,990. As part of the early bird promo, buyers can even get a Php1000 discount. If OnePlus isn’t your cup of tea, the other option you have left is the Moto G 5G Plus that retails for Php16,990.