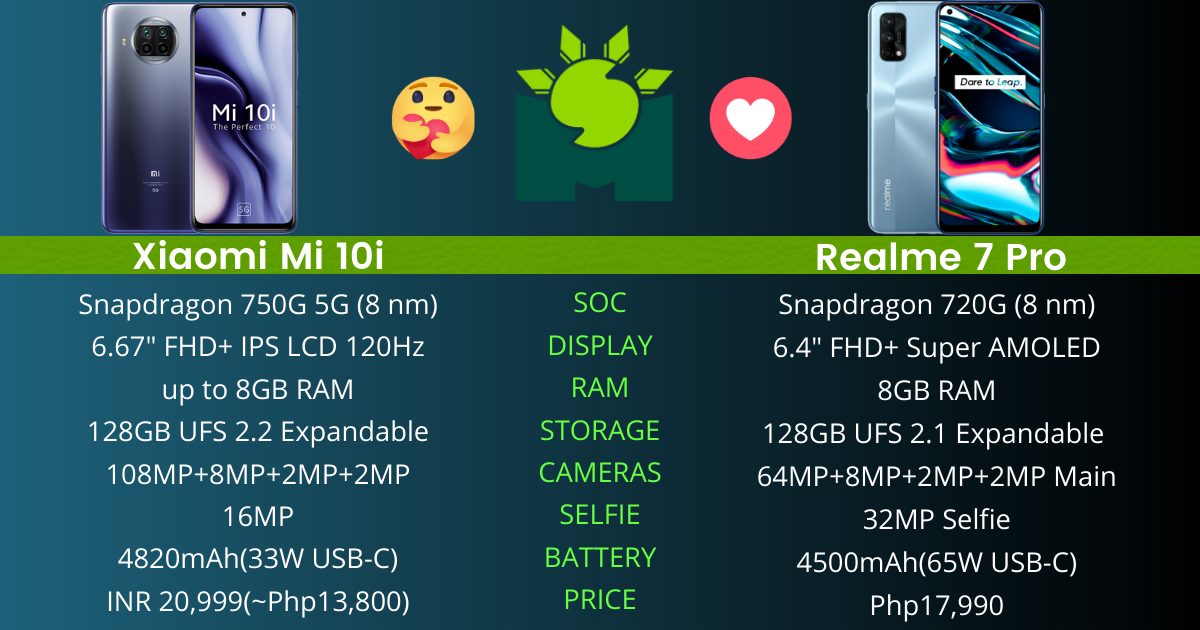 There’s no doubt that the mid-range segment continues to be the most competitive market in 2021. Within the first week of January, we expect at least half a dozen handsets to be released. However, the first one to make noise and grab headlines is the Xiaomi Mi 10i. In a nutshell, it’s the re-branded version of the Redmi Note 9 Pro 5G in India. But if that’s the best mid-range phone from Xiaomi yet, how does it stack up against the best mid-range phone from the yellow team — the Realme 7 Pro?

Xiaomi Mi 10i vs Realme 7 Pro Similarities and Differences

Which is the better buy between the Xiaomi Mi 10i and Realme 7 Pro?

Realme 7 Pro may be the most expensive mid-range phone from the company yet, but it’s still using a polycarbonate back that scratches easily. That’s not the case with Xiaomi Mi 10i’s glass back, protected by Gorilla Glass 5. However, we can’t confirm yet whether the frame is of metal or plastic. Both do sport splash-resistance, to be fair. If you’re looking for a lightweight device, Realme 7 Pro provides you just that.

As seen from the renders online, the 7 Pro is starting to look old when you compare it to the matte and gradient finish of the Mi 10i. Though both are sporting the same finish, the execution looks better on the Xiaomi device.

While the looks easily go to the Mi 10i, we have to say that the 7 Pro gets the award when talking ergonomics.

When talking about the display, the Mi 10i has a bigger panel at a 6.67″ diagonal. On top of that, it’s also more versatile as it packs a 120Hz adaptive refresh rate for faster animations and HDR10 playback. The fast refresh rate may benefit competitive gamers due to the faster response time of the screen, but if you want better colors, the 7 Pro has you covered.

The Realme device dumps the fast refresh rate in favor of Super AMOLED that offers an infinite contrast ratio and punchy colors. Additionally, you get to enjoy Always-on Display for quick glancing at notifications and the in-display fingerprint scanner.

If picture quality is what you seek, Realme 7 Pro will give you that. But for those who are into gaming and technical spec sheet, Mi 10i definitely provides that. But if I were to choose, I’d gladly pick 120Hz over a mid-range Super AMOLED panel as I prefer a fast screen.

Snapdragon 750G vs Snapdragon 720G – I’ve read comments about Snapdragon 750G and some of you brand the new chipset as a worse performer than 765G. And no one blames you for that as Qualcomm’s new naming convention has been confusing since last year. To make things clear, 750G is a bit faster in this regard due to software tweaks and enhancements in the background. Real-world usage, however, is a different story.

Now that you know where the 750G stands, you should also know that the 720G performs a lot worse. We’re not saying that it’s a bad chipset; in fact, it’s still a good chipset for casual use. But if you want the extra power, as well as 5G connectivity, 750G is the way to go.

As for RAM and storage, both devices are stuck with 128GB expandable storage and up to 8GB RAM.

On paper, there’s a huge difference in camera numbers — 108MP on the Mi 10i and 64MP on the 7 Pro. However, we’re comparing Samsung’s 108MP HM2 ISOCELL and Sony’s IMX682 sensor. The latter has been quite popular among mid-range and premium mid-range as it’s capable of capturing well-balanced shots. Though the large sensor on the Mi 10i allows for crisper and theoretically better low-light shots; it also paves the way for noisier output when the light source is scarce.

Really, it’s the main sensor that you only need to compare here as the rest of the lenses are technically on par.

When it comes to selfies, though, Realme 7 Pro packs the bigger sensor thanks to the 32MP lens. Interestingly, there’s EIS for stable video selfies and crisper photos. We’re not sure whether or not the Mi 10i’s 16MP also has the same stabilization, but for now, 7 Pro gets the nod in terms of selfies.

It appears that stereo speakers are becoming a trend in mid-range phones. And for a 5G device, we’re also glad that the Mi 10i still has that headphone jack. This is the first time we’re giving a tie for the two devices.

Xiaomi Mi 10i has a larger battery capacity between the two, packing 4820mAh. It’s also backed up by a 33W fast charger that allows for 0-100% in just 58 mins. You can also use other fast chargers to take advantage of fast charging through the Power Delivery standard.

Based on my experience with a two-year-old phone, I found out that I don’t mind charging from time to time so long it’s fast and quick. So, If I were to choose, I would go for the 7 Pro solely for its charging speed.

Realme 7 Pro is available for purchase for Php17,990, while the Xiaomi Mi 10i has yet to arrive. As it stands right now, Realme’s device still offers compelling features and specs. And that charging speed might make some of you drool. However, the Mi 10i is the better device when it comes to the overall package. Not only does it pack the better and more powerful chipset, but it also gives you a bit of futureproofing through 5G. The only thing left to do is for Xiaomi to bring the device at the right price point.