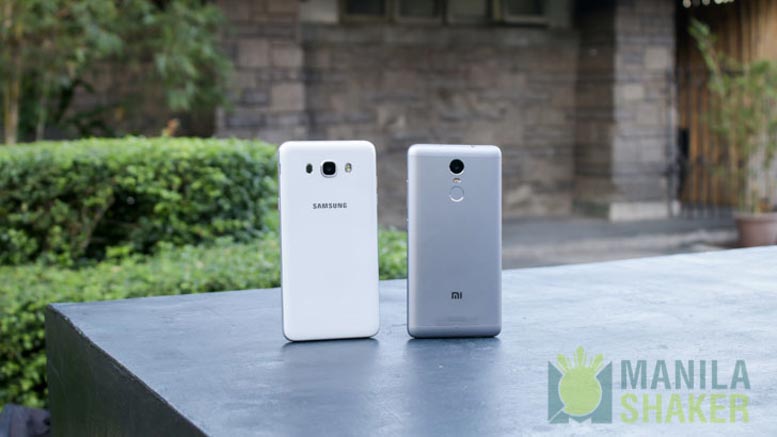 We put the latest budget Samsung Galaxy J7 2016 edition in a comparison with another cheap yet powerful Android smartphone, the Xiaomi Redmi Note 3 Pro. Between the two, which phone will give you more value for your money? Let’s find out in our full review and in-depth comparison.

The Samsung Galaxy J7 2016 has a few aesthetic improvements from the 2015 model. It mostly retains the plastic material, shape, and design with a removable back and replaceable battery. The addition of the metal frame is perhaps the only big change in the build as the 2016 model feels sturdier compared to last year’s model.

Meanwhile, the Xiaomi Redmi Note 3 Pro is a slight upgrade from the non-pro version while keeping the aluminum back with plastic caps on top and bottom. It has a fingerprint sensor and sports more premium feel than the Samsung mid-ranger.

Both have expandable memory using microSD card but only the Galaxy J7 offers dedicated slot as well as dual-SIM card feature.

The choice here is between a pretty solid yet with a flexible phone or a metal one with a fingerprint scanner.

Sporting a 5.5-inch full HD 1080p Super AMOLED panel, the Galaxy J7 beats the color and contrast on the 5.5-inch 1080p IPS LCD of Redmi Note 3 Pro. The viewing angles and brightness level are higher on the former though the latter is still decent enough in outdoors.

The higher 16MP sensor of the Redmi Note 3 Pro produces sharper, more detailed shots. The dynamic range handling is also better compared to the 13MP f1.9 of the Galaxy J7 2016. However, in terms of color, the latter proves to be on the more neutral, naturalistic side.

Equipped with a 5MP front-facing selfie camera on each, the Samsung shooter has a bland color but with a wide-angle and brighter photos in comparison to Xiaomi’s shooter with naturalistic rendering.

The two could shoot up to 1080p video with a more decent quality on the Redmi Note 3.

These two mid-rangers have solid battery life. The Xiaomi smartphone packs 4000mAh battery while the Samsung’s budget one is offering a removable 3300mAh juice. The large difference in numbers does not make a huge leap in battery life for the Xiaomi hardware. screen-on time is close while leaving a couple of hours in endurance rating.

Each is comes equipped with a back-firing single loudspeaker on the back. The quality on each is middling in terms of vocals and bass for their size and price. There are no rich audio features such high-res support, though.

If we will weigh the value, definitely you be getting more on the Xiaomi’s mid-range with a powerful hardware and sleeker design. The Samsung Galaxy J7 2016 is still a solid performer with a pleasing Super AMOLED screen and reliable overall performance but for a little more of your cash.

If you were to choose between the two, which mid-ranger will you buy and why?