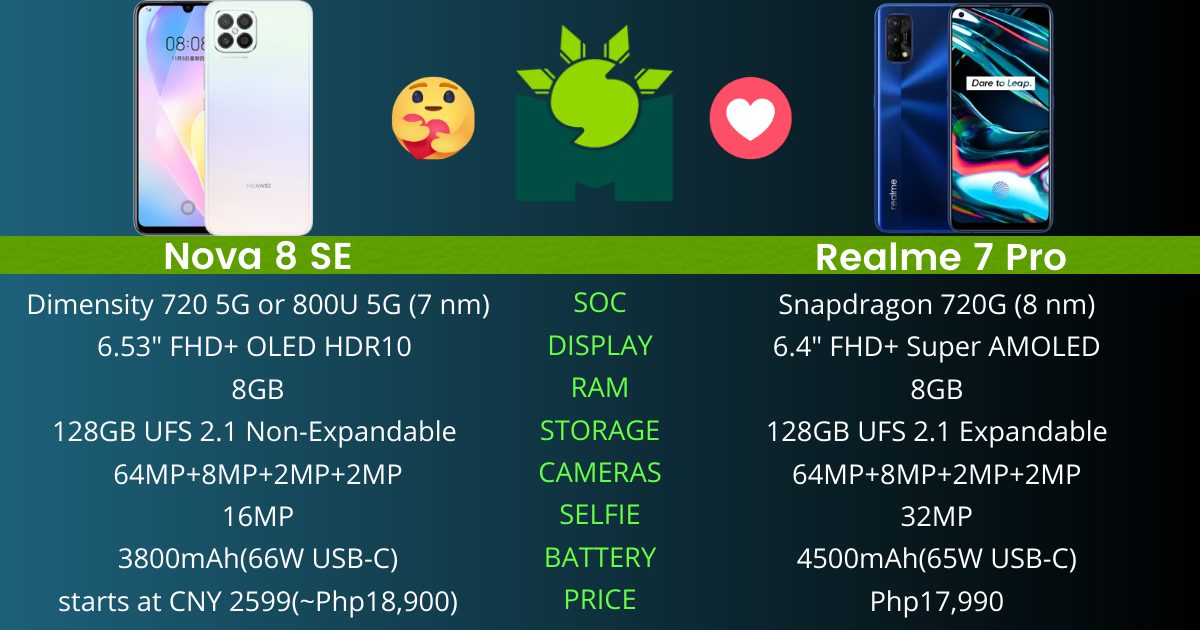 Realme 7 Pro is one of the best AMOLED and fast-charging phones to get for not a lot of money. Though the value you get isn’t as exciting as what Realme 6 Pro offered, you’re still getting a pretty good phone. Now that the device is in a different competition, how does it stack up against the likes of Huawei Nova 8 SE; another device with nearly the same spec sheet yet with a bit of futureproofing in tow? 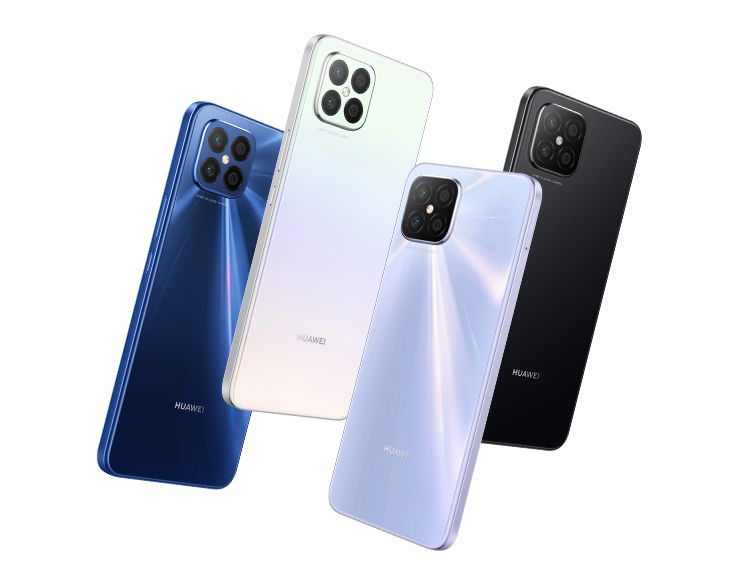 Which is the better buy between the Nova 8 SE and Realme 7 Pro?

Despite the difference in branding, the Nova 8 SE and Realme 7 Pro couldn’t be more alike. If not for the camera module, one would think that these two devices are from the same brand. Though Realme’s device is using polycarbonate material all around, we can’t say for sure for the Nova competitor. However, most of you might find Huawei’s phone easy to handle thanks to its lighter and thinner profile. But if there’s one thing that makes the Nova 8 SE antiquated compared with the Realme 7 Pro, that’s the display.

Mind you, both are packing OLED screens that provide deep black levels and saturated colors. However, the Nova 8 SE, despite the longer diagonal screen, comes equipped with a teardrop notch, whereas the 7 Pro is already using a pinhole cutout. When it comes to picture quality, though, only the Nova device supports HDR10 that allows for brighter and higher dynamic range when watching HDR10-compatible videos on Netflix, YouTube, and other streaming services.

Because these two devices are rocking OLED, in-display fingerprint scanners are here as well.

The Nova 8 SE maybe the newer device, but the 7 Pro leads in the design department due to the use of a pinhole cutout for the selfie camera. But, we do have to mention that the former device is more capable of displaying better screen quality, all thanks to HDR support.

Dimensity 720/800 vs Snapdragon 720G – Any sort of users who don’t play games that much will find the Snapdragon 720G of the 7 Pro just fine. Despite being the older chipset, it has aged well enough for the company to re-use it twice. But, we can’t deny the fact that the Dimensity chipsets of the Nova 8 SE have the advantage in performance, size, and capability.

Nova 8 SE is being powered by Dimensity 720 for the standard model and Dimensity 800 for the high-end model. Going with the latter will give you an extra boost in CPU performance, but the GPU performance should be pretty much the same, if not better. After all, they’re both using Mali-G57 MC3 GPU. What separates MediaTek’s chipset in this comparison, though, is the 5G modem. With it, the 8 SE is capable of supporting the next-gen wireless connectivity of up to 1Gbps download speed. That is if your area supports it.

For the most part, the camera experience between the two is similar thanks to the same 64MP sensor, 8MP ultrawide, and two 2MP lenses for both macro and depth. Both, again, are also capable of up to [email protected] video recording. As of writing, the 7 Pro has the advantage of smoother videos due to the addition of EIS. While we expect the 8 SE to come with the same stabilization, Huawei has yet to confirm it.

When it comes to selfie cameras, Realme 7 Pro has the lead over the Nova 8 SE. The 32MP should output sharper and more detailed selfies than the 16MP sensor. Additionally, there’s already EIS for video selfies, as well as a slo-mo recording of up to 120fps.

One of the downsides of having that 5G privilege is the lack of an audio jack. There’s no way you can connect wired headphones or mic on the 8 SE as it only comes with a standard speaker. On the other end, Realme 7 Pro is not only using stereo speakers but also provides you to use a 3.5mm audio jack. On top of that, there’s support for 24-bit hi-res audio playback for a better sound experience.

If you want longer run times between charges, the 4500mAH battery of the 7 Pro will provide you that over the 3800mAh of the 8 SE. Aside from the bigger battery, the in-box charger can go up to 65W for top-ups that see the phone hit 100% in just 34 minutes. Interestingly, despite the slightly faster 66W charger and smaller battery of the 8 SE, the device requires 35 minutes to go from empty to full.

Realme 7 Pro may be playing with the other bigs right now, but it still has the advantage over the competition when it comes to value. However, the Snapdragon 720G is showing its age as the newer devices get released with 5G capability.

While the Nova 8 SE is indeed pricier in this comparison, it does pack the better chipset and 5G modem. But, it’s hard to sell those features to consumers when 5G coverage is lacking. On top of that, the battery capacity is below average by today’s standards and the teardrop notch is almost unacceptable.