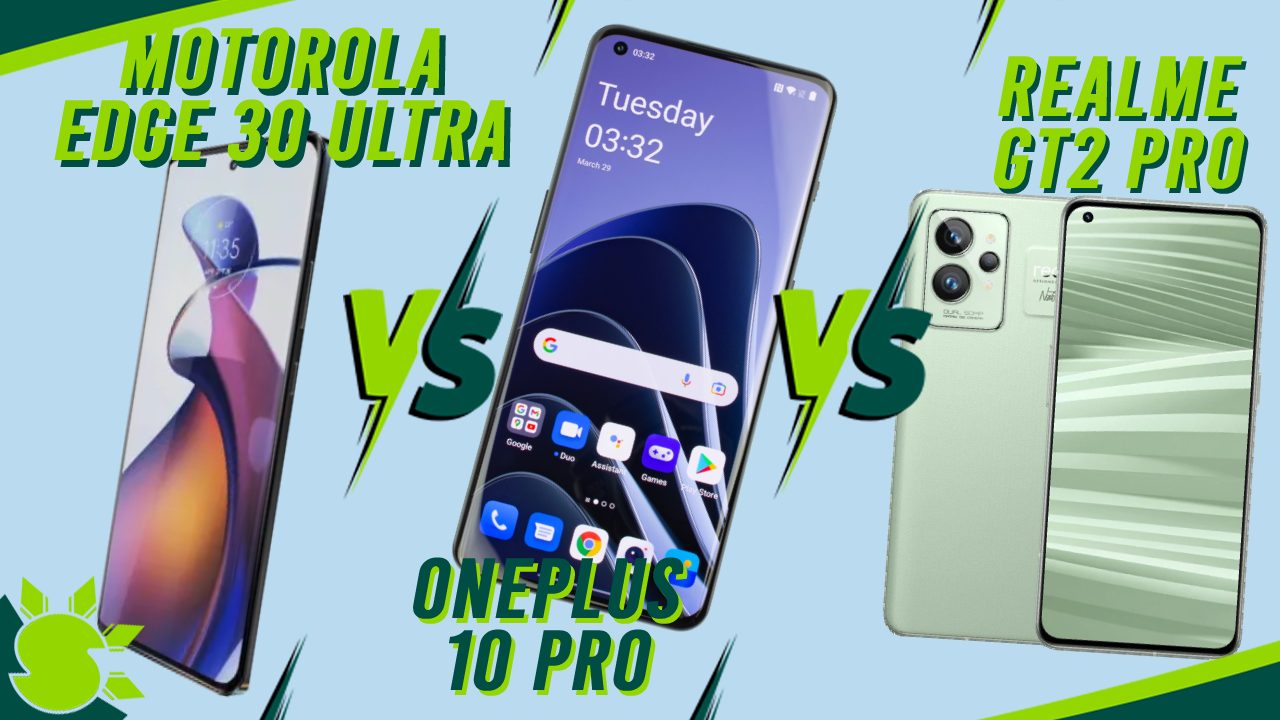 Motorola startled many people earlier this month when it launched a highly potent flagship killer in the worldwide market. The Motorola Edge 30 Ultra is just a rebrand of the Motorola Moto X30 Pro, but it is the first Ultra phone from the Lenovo-owned brand and it boasts incredible features for everyone. However, there are already some outstanding flagship killers on the global market with really fascinating street pricing. Obviously, we’re referring to those introduced in the first part of this year, such as the OnePlus 10 Pro and the Realme GT 2 Pro. Do they provide better value for money? If you’re curious, compare the major specifications of the Motorola Edge 30 Ultra, the OnePlus 10 Pro, and the Realme GT 2 Pro.

Because of the existence of curved screens, the designs of the Motorola Edge 30 Ultra and the OnePlus 10 Pro appear more attractive. They are also made of high-quality materials, such as glass for the back and aluminum for the frame. The Realme GT 2 Pro features a flat display and a bio-polymer rear side, so don’t anticipate the best build quality, even though the material is unique in its genre and matches the touch and feel of actual paper. The Motorola Edge 30 Ultra is my particular favorite because of its attractive design and smaller size.

If we omit the curvature, the OnePlus 10 Pro and Realme GT 2 Pro feature the same display, and it is a superior screen to the one found on the Motorola Edge 30 Ultra. We’re talking about an AMOLED display with a diagonal of 6.7 inches, a Quad HD+ resolution of 1440 x 3216 pixels, a refresh rate of 120 Hz, HDR10+ certification, and an in-display fingerprint reader. It’s a panel identical to the ones seen on the most costly flagship phones right now. The Motorola Edge 30 Ultra has a higher refresh rate of 144 Hz, but the resolution is lower and it uses a different P-OLED technology, resulting in a lesser quality display.

Because it has a slightly superior CPU, the Motorola Edge 30 Ultra outperforms its competitors in terms of performance. The Snapdragon 8 Plus Gen 1 is constructed on a 4 nm manufacturing process and features an octa-core architecture comprised of a Cortex X2 CPU operating at 3.19 GHz, three Cortex A710 CPUs running at 2.75 GHz, and four Cortex A510 CPUs running at 1.8 GHz, as well as an Adreno 730 GPU. The chipset may be used with up to 512 GB of internal storage and 12 GB of RAM. The Realme GT 2 Pro and OnePlus 10 Pro are powered by a Snapdragon 8 Gen 1 processor with up to 256GB of native storage and up to 12GB of RAM. They, on the other hand, enjoy superior Android customization thanks to OPPO’s ColorOS.

The Motorola Edge 30 Ultra has the most sophisticated camera configuration. First and foremost, it is the world’s first gadget with a 200MP back camera with OIS. It also sports a 12MP telephoto sensor and a 50MP ultrawide camera. The Realme GT 2 Pro lacks a telephoto camera, instead opting for a 3MP microlens with 40x magnification. The OnePlus 10 Pro includes a telephoto sensor with 3x optical zoom, however, the primary sensor has a lower resolution of 48MP. Motorola also wins the selfie contest because of its incredible 60MP front camera that can capture 4K films.

With 5000 mAh batteries, the OnePlus 10 Pro and Realme GT 2 Pro outperform the Motorola Edge 30 Ultra. As a result, they have longer battery life; given that they share the same physical components, they do not differ much in terms of battery life. The OnePlus 10 Pro, on the other hand, has quicker 80W wired charging and, unlike the Realme, allows wireless charging.