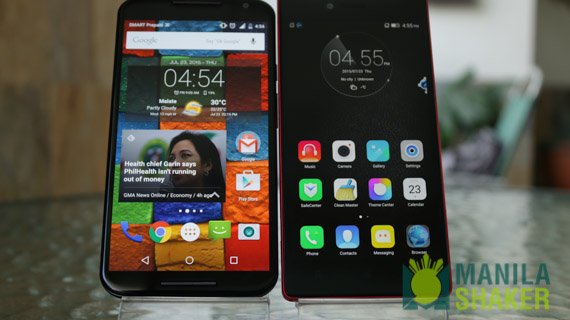 The Lenovo Vibe Shot (priced at P15,490) faces off with Moto X 2nd Gen (priced at P17,990) in this comparison review. We weighed and reviewed both phones fairly to help you choose a phone that fits you.

Both the Vibe Shot and the Moto X are using metal frames for its body structure. Their difference is that Vibe Shot has glass made body, while the Moto X possesses a matte made rubber back.

Moto X is considered to be more compact despite being relatively larger than the Vibe Shot. It also has a unique water resistant feature that is not available to its opponent.

Vibe Shot however, has utility made physical buttons that are not present to the Moto X.

The color of the IPS display of the Vibe Shot is relative close to the AMOLED of the Moto X 2nd Gen. Image quality and sharpness is in par as well.

In terms of viewing angles, both devices deliver excellently.

The Winner: Tie for both image quality and screen quality.

Despite this difference in specs, color shading and white balance for both phones are equally excellent. Vibe Shot however, is seen to be more detailed, image wise and delivers a more crisp shot thanks to its 16-megapixel sensor.

Vibe Shot’s downside is that if a high dynamic ranged image is taken, the image often turns out to be oversaturated.

The Winner: Tie for Still images

In terms of video, both phones have their own specialized strengths, namely the vibrant wise and wider angled video capability of Vibe Shot and the dynamic heavy, excellent in brightness video of Moto X. One factor that tips the scale towards Moto X is its more rich audio responses and the white balance, video wise is much more crisp and clear for Moto X compared to Vibe Shot.

The Winner: Tie for own specialized strength in video shooting and audio. 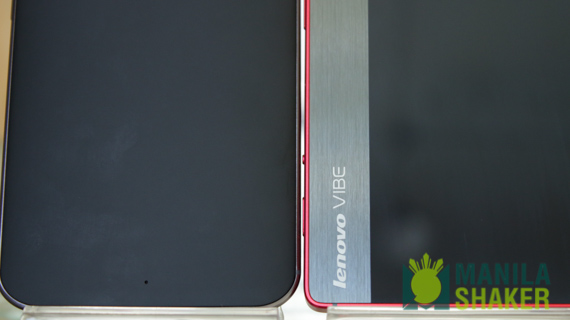 The Vibe Shot is far more superior in terms of speed in comparison to the 2GB RAM and Snapdragon 801 empowered Moto X, this is all thanks to the 3GB RAM and octacore Snapdragon 615 chip of the Vibe Shot.

In the benchmark test, Moto X 2nd Gen proved to be more advantageous to its opponent by beating Vibe Shot in both Antutu and Geek bench benchmark rating scales.

In the game speed test, Moto X is showed to be faster in terms of loading time compared to the Vibe Shot.

The winner: Moto X in the majority of the conducted performance tests

Moto X 2nd Gens’ front facing stereo speakers helped the phone in delivering clear and balanced high pitched tone, a feature which is not present in the Vibe Shot. They are however, in par in terms of audio volume.

Both delivered exceptionally in their specialized fields of strength. The advantages in Vibe Shot is seen in its high end image shooting capability, while the Moto X 2nd Gens’ strength is seen through its speed system and unique features.

Both phones are impressive at their own rights and respectable advantages.

Both comparison participants are available thru online stores for only P15,490 for the Lenovo Vibe Shot and P16,999 for the Moto X 2nd Gen.

Please give us your feedback regarding which phone suits you best.

Also, check out the video version of this comparison review