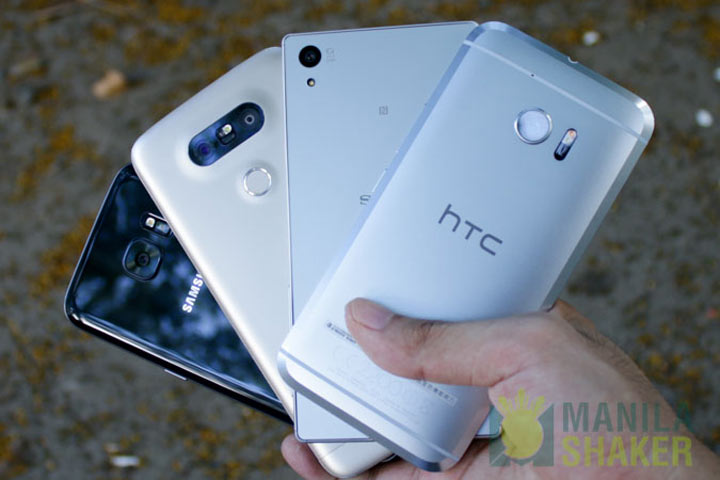 The best four Android camera phones this year have finally met in our Ultimate Camera Comparison and review. Between the LG G5, Samsung Galaxy S7, HTC 10, and Sony Xperia Z5, which do you think is better and probably the best in camera this year?

There’s only one way to find out that and that’s through our Manila Shaker’s style camera comparison.

Before we start, all phones have been updated to the latest software version. The Xperia Z5 is running on Marshmallow while HTC 10 with the latest version and has the widest angle lens in its main sensor followed by LG G5 and Galaxy S7. We used the main camera of LG G5 but the wide angle secondary sensor is really fun to use, check full review of LG G5 here.

On the first image with HDR off, the Xperia Z5 showed the closest color reproduction as on the Canon with close to realistic shot, though a little greenish. Preserved sharpness on HTC 10 is top-notch with deeper contrast level, but I think it’s far from the smoother and finer details of what you can see on the other shooters. S7 has modest sharpness and color rendering. Meanwhile, the G5 is too warm, albeit high saturation is more noticeable.

Next with HDR off, Z5 is impressive here and showed smoother details and close color to the Canon 70D. This is followed by the LG G5 but with a slightly artificial sharpening. The sharpening process on Galaxy S7 looks worse with the jagged details and far from natural. HTC 10 has really good detail preservation, though you can see some yellow tint. In the end, the choice will depend on your preferences.

With HDR off again, LG G5 edges out the 3 with a brighter shot, but the highlights on the sky are overblown. HTC 10 did a good job by keeping the blue color of the sky. Colors on S7 are little off and pale if you look at the leaves. Z5 has modest dynamic control here yet with smooth details but a little greener.

Turning on the HDR, the LG G5 really showed crisper details and deeper contrast level followed by the Xperia Z5. The HDR on HTC 10 is subtle and has more neutral colors. The HTC 10 and S7 have softer details but the latter have warmer white balance.

Next shot with HDR, the Xperia Z5 has the closest color and white balance to the Canon 70D. Look closely at the power lines, you would notice that ghosting on LG G5 is more apparent than the rest and even similar to its non-HDR photos. But the G5 nails the details here followed by S7. HDR on HTC 10 is again subtle with a little yellow overcast.

In this indoor shot, we will be focusing on the noise level. But first, for the color rendering, the Z5 trumps the 3 with its near natural color as the Canon. It is followed by HTC 10 and LG G5. On the other hand, the noise is more apparent and visible on the Z5 and HTC 10. The S7’s large f1.7 aperture really helped in producing well-exposed with least noise among the group.

On the first low light shot, the S7 produced the brightest image and surprisingly the color is as natural as to the Canon 70D. The Z5 did well in lifting the dark areas but the color is greenish and the details are inferior. I think the HTC 10 did a pretty job here and better than LG G5 despite the yellow overcast.

Next night shot shows how impressive the Z5 in colors and details if compared to the quality of the DSLR. The S7 is really good too with a crisper shot and deeper contrast on it. Both the G5 and HTC 10 overblown the highlights here.

On another night shot, the S7 showed more consistent image quality here. It’s followed by LG G5 and Xperia Z5 in details. On the other hand, HTC 10 keeps the shot brighter than the rest.

In selfie shooting, I think the S7 did far a better job the rest in dynamic range handling. The proof is on the leaves on the top. Both G5 and HTC 10 have really good selfie shots too. The Xperia Z5 keeps the natural colors but it’s bluish.

Selfie in daylight and low light

The HTC 10 has the only selfie camera with Optical Image Stabilization. With the main camera, all can shoot up to 4K video with SloMotion support. The Z5 beats the rest in stabilization, thanks to the technology behind its SteadyShot feature.

It’s really hard to award the best cameraphone from among these shooters. I think all are exceptional and currently the best in the market. You can’t go wrong with any of these shooters. In the end, the decision will still matter to you and the inclusion of other features such as the display, battery life, processor, and much more.

As usual, let us know which camera phone do you think is the best in this shootout.