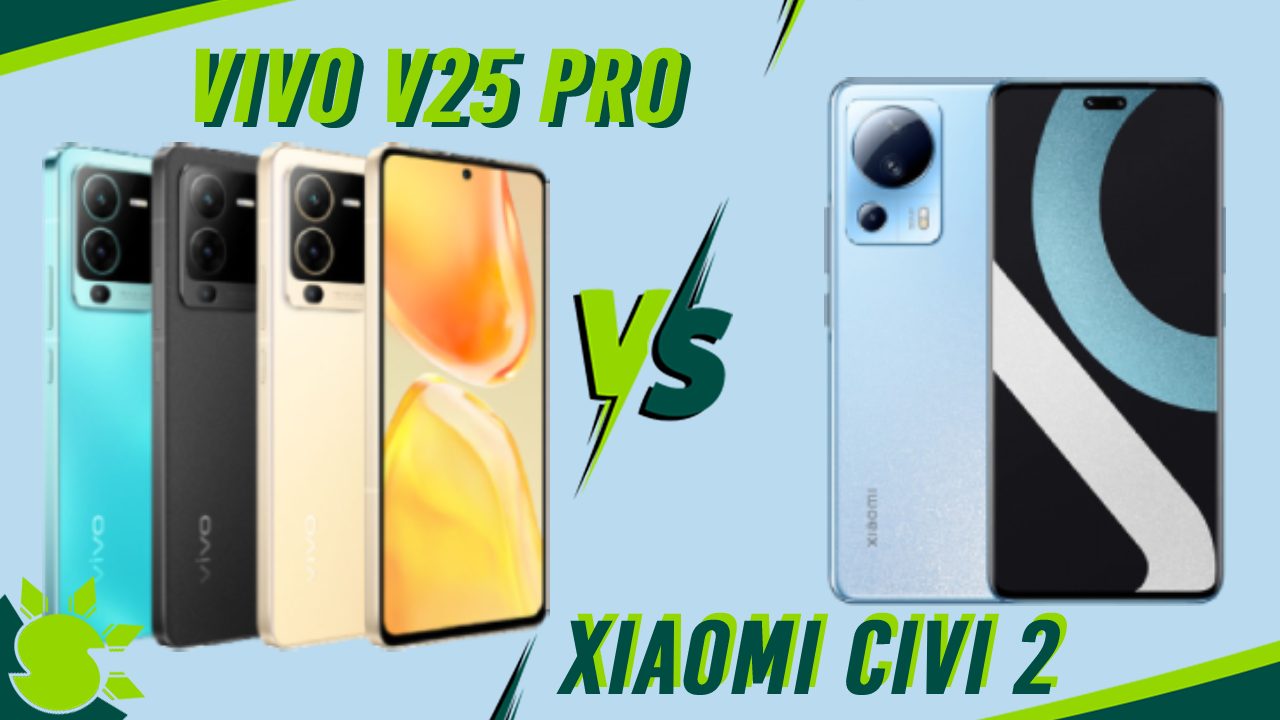 Are you looking for a lovely phone? If so, you’ve come to the correct spot since we’re discussing the Xiaomi Civi 2: one of the most stunning products introduced this year. Several smartphone makers are focused on design in the midrange sector because users value acquiring beautiful smartphones with a good quality-to-price ratio. However, the latest Xiaomi mid-ranger is not the only one with an eye-catching appearance. There is the Vivo V25 Pro, which was introduced recently and is in the same price range as the others. Now, we believe it is appropriate to compare the key specs of the Xiaomi Civi 2 with the Vivo V25 Pro.

The Xiaomi Civi 2 has a highly sophisticated design, and as previously stated, it is one of the finest in this category. It is made of quality materials such as aluminum for the frame and glass for the back side, which is covered by Gorilla Glass 5. It is one of the thinnest phones available, measuring only 7.2 mm thick, and it is also one of the lightest, weighing only 172 grams. Last but not least, it is the first Android phone with a feature akin to Apple’s Dynamic Island: a pill-shaped punch hole located prominently on the upper portion of the display. The Vivo V25 Pro, with its glass back and color-changing rear cover, when exposed to UV rays, is another stunning phone (such as under direct sunlight). However, in this comparison, it is unable to compete with its competitor.

When it comes to hardware, the Xiaomi Civi 2 comes out on top. It is powered by the Snapdragon 7 Gen 1 mobile platform, which is created using a 4 nm manufacturing process and runs at a maximum frequency of 2.4 GHz (it has an octa-core architecture), and it can be combined with up to 12GB of RAM and up to 256GB of UFS 2.2 internal storage. The Vivo V25 Pro has faster UFS 3.1 internal storage, but the chipset is inferior: a Dimensity 1300 by Mediatek built with a 6nm production process and with an octa-core architecture composed of a Cortex A78 CPU running at a maximum frequency of 3 GHz, three Cortex A78 CPUs running at 2.6 GHz, four Cortex A55 CPUs running at 2 GHz, and a Mali G77 MC9 GPU. These phones ship with Android 12 and are expected to receive at least two significant upgrades to the next Android version.

These handsets’ back camera sections are significantly different. The main camera of the Vivo V25 Pro is more attractive not just because of its 64MP resolution, but also because it has optical stabilization. The Xiaomi Civi 2, on the other hand, lacks OIS but has a superior 20MP ultrawide camera. Last but not least, the Civi offers a better front camera arrangement that includes two sensors with 32MP resolutions, one of which is an ultrawide camera, and a front-facing LED flash with two LEDs.