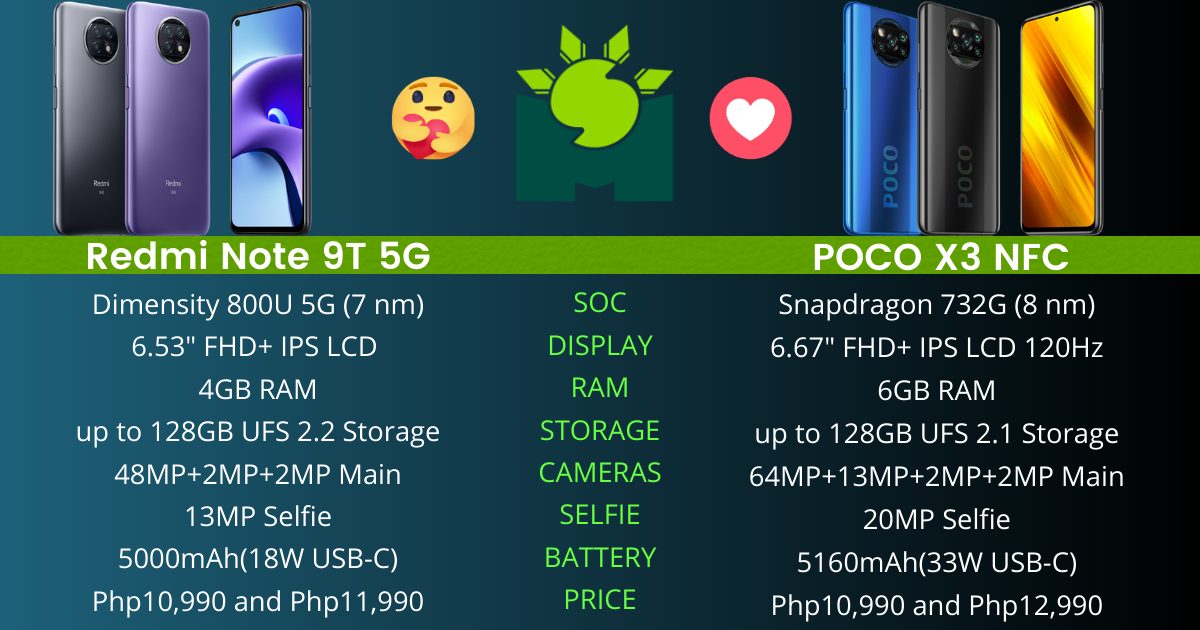 Which is the better buy between the Redmi Note 9T 5G and POCO X3 NFC?

Both phones are bearing similarities in terms of the overall look, from the rounded edges to the unique camera module. The same goes for the glass front, plastic frame, and plastic back. While POCO X3 NFC comes in a glossy finish, Redmi Note 9T dons a matte finish, which is starting to be a mainstay amongst phones. Other than that, we can’t deny the Redmi Note 9T looking like a polished version of the unapologetic striped pattern of the X3 NFC. During our review of the latter, we said it’s too big and bulky for the average consumer. With the Redmi Note 9T, now it’s smaller and lighter, we may finally have a more ergonomic phone. As such, we’re giving our thumbs up to the Redmi Note 9T in the design department.

Flip over the two, and each sport the same IPS LCD FHD+ panel with 450 nits of typical brightness. Though renders show a smaller centered-pinhole cutout for the X3 NFC, we’re still waiting for the Redmi Note 9T 5G to arrive to confirm the difference. Nevertheless, both are sporting Gorilla Glass 5 for drop and scratch protection. What makes the X3 NFC special still makes it our preferred phone when it comes to screen quality — 120Hz refresh rate. Redmi Note 9T 5G is still stuck at 60Hz, and with animations twice as smooth on the X3 NFC, along with the ability of HDR10 playback, POCO wins this one by a mile.

PerformanceDimensity 800U 5G (7 nm) vs Snapdragon 732G (8 nm) – Snapdragon 732G was the last iteration of the 730 Series, offering graphical improvements and features over its predecessors. It still remains one of the most power-efficient chipsets with enough graphical prowess for gaming. Now that it’s up against a 5G-ready Dimensity 800U from MediaTek, can Qualcomm still maintain its lead? We still have to wait for our hands-on on the Redmi Note 9T, however, initial benchmarks from different sources show the Dimensity a tad faster in CPU, GPU, and memory speed. But even if the Redmi Note 9T, you still have to decide whether you can stick with a 4GB RAM phone as only the X3 NFC can go up to 6GB RAM. Your phone benefits from bigger RAM capacity, especially when using intensive apps and receiving software updates from the manufacturer. It ensures the phone’s speedy performance since day one.

On paper, it appears Dimensity 800U has the advantage over the Snapdragon 732G, not to mention the 5G capability of the chipset to connect to faster networks. For now, we’re giving the benefit of the doubt to the Redmi Note 9T until our testing.

There’s a stark difference to cameras in this comparison.

POCO X3 NFC has more cameras on the back, featuring a 64MP Sony sensor, a 13MP ultrawide, and a pair of 2MP lenses for macro and depth. In our review, all of them, except for the macro, gave us impressive picture quality for the price. The same goes for the 20MP selfie camera.

Redmi Note 9T 5G is going to have a hard time one-upping POCO as it is only using a 48MP main sensor, and a pair of 2MP for macro and depth. Yes, there’s no ultrawide option, which is unfortunate for those who love to take group or landscape shots. The 13MP is also facing the same dilemma. However, we will see how good the processing capabilities of Dimensity 800U — if it’s enough to beat larger camera sensors at its price point.

Whether it’s stereo speakers or an audio jack you’re looking for, both devices offer them. There’s even support for 24-bit playback for better sound quality. You know how this goes; it’s a tie.

Redmi Note 9T 5G is holding a slightly smaller battery inside, rated at 5000mAh. It’s definitely still plenty for a mid-range phone, but not as much as the 5160mAh on the X3 NFC. Additionally, there’s faster charger support for POCO — we’re looking at 33W, which goes up to 62% in 30 minutes, versus the 18W that reaches up to 33% in 30 minutes. And if 5G happens to be available in your area, you’ll want a bigger battery and faster charging for that power-hungry feature.

Other than the better on-paper chipset performance and 5G, there’s nothing much the Redmi Note 9T 5G has to offer. At this point, 5G is still a niche feature; there’s no wide coverage for it, and 4G can barely maintain its reliability across the country. There’s no reason for you to jump the bandwagon and settle for a hyped mid-range phone because it has 5G, especially with the Redmi Note 9T 5G priced at Php10,990 and Php11,990 for the 4GB/64GB and 4GB/128GB models, respectively.