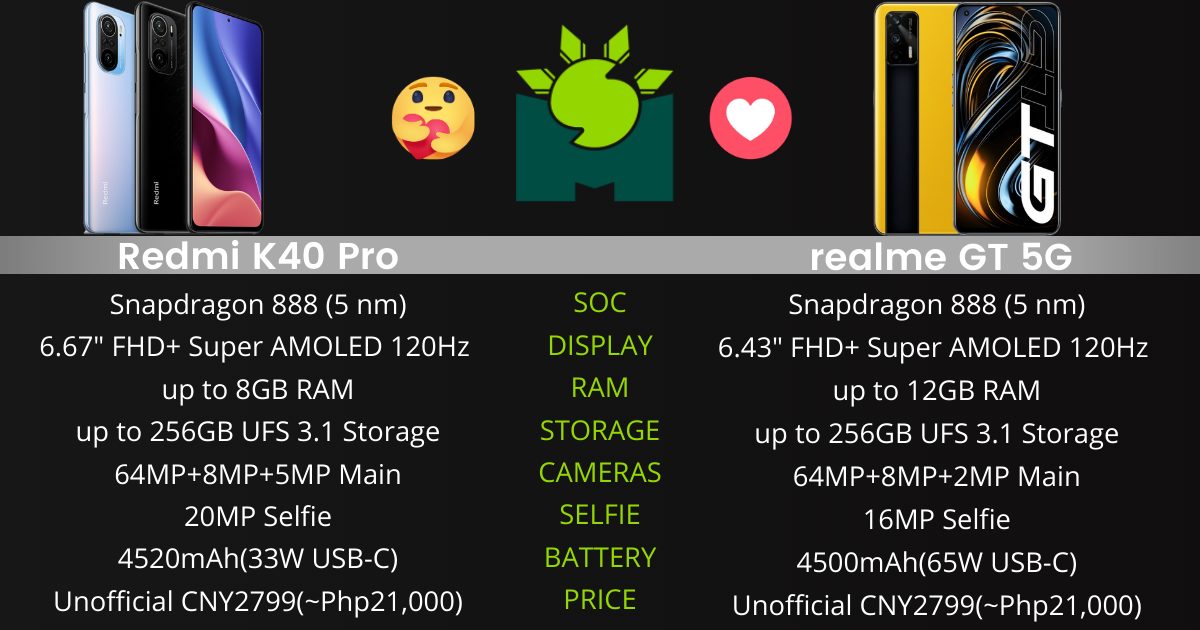 In 2021, what does it take for a phone to call itself a flagship killer? According to realme and Xiaomi, a device sport the latest flagship chipset, very good camera hardware, a bright & fast display, and a fraction of a true flagship price’s. This category fits the Redmi K40 Pro and realme GT 5G perfectly; however, which is the better flagship killer between the two?

Which is the better buy between the Redmi K40 Pro and realme GT 5G?

Whether it’s realme GT 5G or Redmi K40 you’re gunning for, each phone features a glass design in a distinct showing that makes it easy to identify which is which.

In the case of the Redmi K40 Pro, its black, white, and aurora blue colors don a similar casing to the Xiaomi Mi 11 “true flagship.” They are in a frosted finish, which makes the back panel resistive to smudges. What’s more, Redmi’s best phone yet carries an IP53 rating making it a splash-proof device.

On the other end, realme GT 5G compensates for the lack of an official rating by offering a leather design option. Other than the glass-sporting blue and silver colors, the Gold/Black variant that reminds us of the POCO M3 offers better smudge resistance versus a frosted finish. realme claims that it’s of Vegan Leather. That said, it’s also the lighter phone in this comparison at 186g. Thickness-wise, Redmi K40 Pro is way thinner at 7.88mm.

When it comes to screen quality, neither phone will offer a significant advantage over the other due to the use of the same panel — Samsung’s E4 Super AMOLED with a 120Hz refresh rate. Where they differ is in peak brightness, the ability of the screen to go bright under direct sunlight, and the screen size.

While realme never mentioned if the GT comes with added screen protection, Redmi was never shy sharing that the K40 Pro is using Gorilla Glass 5.

On paper, the Redmi K40 Pro is winning the display category. But for the design, this is mostly subjective, but if we have to pick, we have to give it to Redmi K40 Pro for its official IP rating.

Snapdragon 888 – at the very least, there’s little to no difference in performance since both devices are packing the latest Snapdragon 888 from Qualcomm. Though both come with 5G capability, neither can expand storage via a microSD slot. For the Redmi K40 Pro, you’re either stuck with 6GB/8GB RAM and 128GB/256GB. Realme GT offers a bit of breathing room with its 8GB/128GB RAM and 128G/256GB storage.

Though despite all that power, Redmi K40 Pro is still using a side-mounted fingerprint scanner instead of the in-display scanner on the realme GT. Not that a capacitive scanner is unreliable when most of the time it’s faster and more accurate than an in-display, it’s that some buyers may see this as a downgrade.

Another area where the experience may differ is UI. Xiaomi has started plaguing its phones, particularly the first-party apps, with optional ads turned on out of the box. Unlike its competitor, realme UI 2 offers more customizability while keeping that stock, rid of ads, Android feel without compromising speed.

Nevertheless, both phones are equal in CPU and GPU performance, so you shouldn’t worry about games or intensive apps lagging during extended. That said, we still need to give the advantage to realme GT right now until we get a hold of both devices.

Some of you may be confused why we’re comparing the Redmi K40 and realme GT 5G, and the reason for that is the cameras. Both models are sporting a 64MP main sensor, with varying secondary lenses. The 108MP sensor is only found on the Redmi K40 Pro Plus, and we’re also hearing murmurs that the realme GT with 108MP is coming soon as well. But that’s for another comparison.

Right now, what you need to know is that the 8MP ultrawide and 5MP tele-macro of the K40 Pro doesn’t differ that much from the 8MP ultrawide and 2MP macro of the realme GT. The Redmi phone may be touting a tele-macro lens, but there’s no optical zoom offered here. However, the main sensor is indeed capable of up to [email protected] video recording, unlike the realme GT 5G — capped at [email protected]

On the front side, Redmi K40 Pro has the advantage on paper with its 20MP sensor versus the 16MP on the realme GT. Regardless, both can only record up to [email protected]

With stereo speakers already a common feature on budget phones, it’s not surprising anymore to see them here. What’s surprising, however, is the realme GT carrying a headphone jack! There’s not a lot known about the jack, but we expect it to support hi-fi audio.

Obviously, realme GT takes this one.

At least 4500mAh is found on either device, which may or may not be enough for the 120Hz displays. If that happens to be your case, realme GT offers a 65W charger that goes up to 100% in 35 minutes. The Redmi K40 Pro only offers 33W, but going to 100% in 52 minutes is still fast enough for most users. But then again, an advantage is an advantage, so realme wins this one.

Both realme GT 5G and Redmi K40 Pro are available in China, so here’s how they stack up in pricing in their native land:

The converted prices don’t include taxes and fees; official local pricing will differ.

It’s interesting to see how close the two devices are; however, we think the top models have the biggest difference in this comparison, due to the higher RAM and storage capacity of the realme GT 5G. If you intend to get the top model, realme GT offers more value than Redmi K40 Pro.