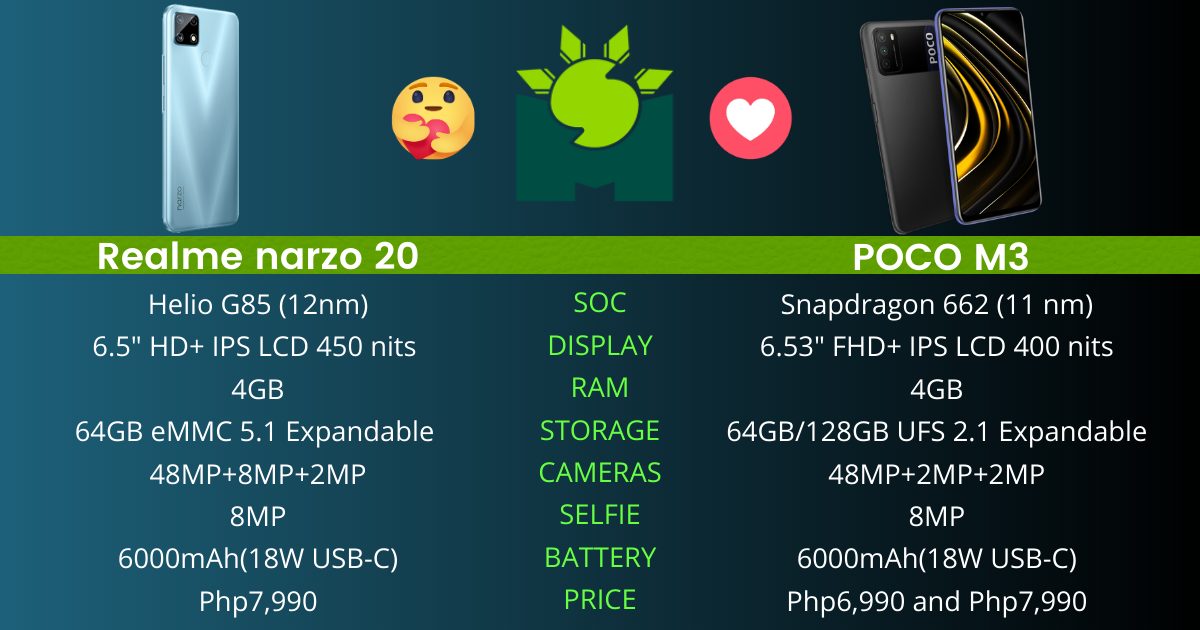 With the POCO M3 now on the Philippine market, the company has finally released a 6000mAh phone that can go against Realme’s narzo 20. But when it comes to the overall package, which of the two provides the best offerings with little comprises?

Which is the better buy between the realme Narzo 20 and POCO M3?

Though the Narzo 20 looks a lot like other Realme phones, such as the C15, the POCO M3 is a breath of fresh air thanks to its wide visor and clean textured finish. You can get the narzo 20 in silver and blue, but the M3 adds a yellow variant, which we think is more striking than the rest. There’s no silver but there’s a black option.

For phones with massive 6000mAh batteries, the POCO M3 managed to be the thinner and less hefty at 9.6mm and 198g. However, both are using all-polycarbonate for the back panel and railings, with a textured finish that makes them easy to grip.

Despite looking like the OnePlus 8T Cyberpunk 2077 Edition, we have to tip our hats off to POCO M3 for introducing a new design to the stale market.

Based on official renders, the M3 has thinner bezels between the narzo 20, especially the chin part. It’s just unfortunate to see a teardrop notch when even Samsung can pull off a pinhole selfie cutout for its cheapest devices. While the 6.5″ diagonal size IPS LCD is the same between the two, the POCO M3 has a better quality panel due to the use of FHD+ resolution and Gorilla Glass 3 protection. On the flip side, the narzo 20 is rated 450 nits typical and 560 nits peak brightness. We’ve yet to identify the capabilities of the POCO device, but the initial listing reveals 400 nits typical.

That said, we still think the POCO M3 holds the advantage in the display category as the FHD+ panel looks miles better than HD+ or 720p.

Helio G85 (12nm) vs Snapdragon 662 (11nm) — for a few months, the Helio G85 was our favorite chipset in a budget device. It doesn’t have the chops to play all the games on the Play Store, but the GPU can handle casual gaming while giving users a decent experience with social media apps and the likes. But the release of Snapdragon 662 made us think twice, even though it’s not a huge upgrade over the Snapdragon 665.

The Helio G85 may be faster in synthetic benchmarks but, the Snapdragon 665 has a more efficient chipset, a faster modem of up to 390Mbps download speed (versus 300Mbps), slightly higher memory clock speed, and a dominating 272 Gigaflops in GPU perf (versus 54). To be fair, the Mali-G52 MP2 from the narzo 20 comes with 1000MHz clock speed as opposed to the 600MHz.

If you can’t decide between the chipsets given their neck-and-neck performance, perhaps the storage size will. The narzo 20 only comes in a single model with 4GB RAM and 64GB, whereas the POCO M3 gives you the option to purchase the top model with 128GB storage. On top of that, the built-in storage makes use of UFS 2.1 (and UFS 2.2 for the 128GB variant), which is up to three times faster than eMMC 5.1 of the narzo 20 in reading speed. In the real-world, POCO M3 opens and loads apps faster and quicker.

At this point, we think it’s safe to say that the POCO M3 leads the way when it comes to performance.

No more quad-cameras here as we’re looking at triple-camera setups only. But the versatility of having an ultrawide lens on the back of the narzo 20 can’t be matched by POCO M3 as it’s missing one. The company opted for 2MP lenses — macro and depth — which are virtually useless in the real world. And despite the ability of the chipset to record up to [email protected], POCO decided to disable the feature here. But, neither does the narzo 20.

You may be someone who doesn’t use an ultrawide lens because the quality is inferior to the main lens, but the ability to expand the field-of-view and capture things from a different perspective is still a handy option to have. With that in mind, we tip our hats to the narzo 20 with the better camera specs, at least on paper.

If you want the best sounding experience between the two, you’ll be able to get that from the POCO M3. Unlike the single south-firing speaker of the narzo 20, POCO already provides you dual-speakers for louder and richer sound output. Additionally, there’s 24-bit Hi-res audio playback support which some of you may find useful, especially when using a headphone.

Speakers on smartphones were often overlooked by manufacturers, and we’re glad to see POCO finally giving the attention that they deserve.

No contest when it comes to the battery department as both devices are equipped with 6000mAh capacity and an 18W fast charger. You may see longer run times with the narzo 20 since it’s using an HD+ panel, but the POCO M3 also has the advantage of power efficiency in the Snapdragon 662.

For the two devices, it’s the same story — a brand releases a budget phone, then the other one-ups the device with a few upgrades for the same price. If you’ve bought a realme or a POCO phone from this year, there’s no reason to switch to either narzo 20 or POCO M3. But if you’re someone who’s saving up and waiting for a good deal, especially the POCO M3’s early bird sale on November 27th, your waiting is over.