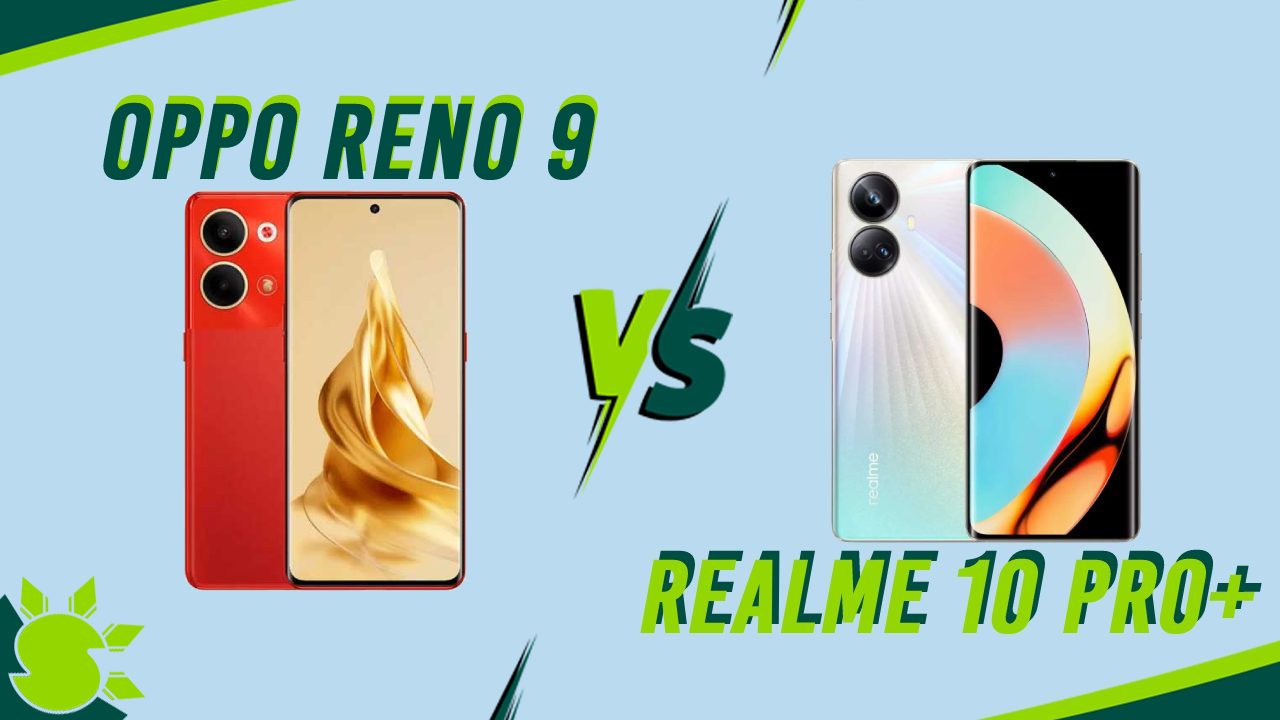 The OPPO Reno 9 series debuted with three models. The realme 10 Series had also debuted a few days prior. The base variation of the former and the high-end model of the latter are priced similarly. We’re talking about the plain vanilla OPPO Reno9 and the realme 10 Pro+: two phones that have a lot in common but are also quite different. Given their price tags, many individuals want to know which one is the greatest and which one best meets their demands. So we decided to clarify things. The major specs of the OPPO Reno9 and the Realme 10 Pro Plus are compared here. The OPPO Reno9’s design is unquestionably one of the greatest of 2022. To begin with, it is one of the tiniest phones available, with a thickness of only 7.2 mm. It is also quite light, at only 174 grams. It has a curved screen on the sides, just like the most costly Android phones, and a unique rear design. Even if I prefer the OPPO Reno9, the Realme 10 Pro Plus is one of the most visually appealing smartphones available. It features a curved screen, like the OPPO, and is incredibly thin and lightweight, but thicker: 7.8 mm. Along with Xiaomi’s newest CIVI phone, these are unquestionably two of the most gorgeous phones in the midrange class.

Because the specs are equal, it appears that the OPPO Reno9 and the Realme 10 Pro Plus share the same display. We’re talking about an AMOLED screen with a diagonal of 6.7 inches, a Full HD Plus resolution of 1080 x 2412 pixels, a refresh rate of 120 Hz, HDR10+ certification, and a peak brightness of 950 nits. There is also an in-display fingerprint scanner on the panel. Given that the display characteristics are similar, you should concentrate on the remaining features when deciding which phone to buy. It’s worth noting that the Realme 10 Pro Plus includes stereo speakers and a 3.5 mm audio connector, while the OPPO Reno9 has a single speaker and no audio jack.

The Realme 10 Pro Plus’s camera configuration outperforms that of the OPPO Reno9. The phone has a triple camera configuration that includes a 108 MP primary sensor, an 8 MP ultrawide lens, a 2 MP macro shooter, and a 16 MP selfie snapper. Unfortunately, the OPPO Reno9 lacks an ultrawide lens and has a lower-quality midrange-class 64 MP back camera, but it features a superior front camera.

Despite being an older SoC, the OPPO Reno9 wins the hardware comparison since it has a superior chipset. We’re talking about Qualcomm’s Snapdragon 778G mobile platform, which is developed on a 6 nm manufacturing process and features an octa-core architecture. The SoC is made up of a Cortex A78 CPU with a maximum frequency of 2.4 GHz, three Cortex A78 CPUs with a frequency of 2.2 GHz, four Cortex A55 CPUs with a frequency of 1.9 GHz, and an Adreno 642L GPU. Along with the processor, there is up to 12 GB of RAM and up to 512 GB of inbuilt UFS 3.1 storage. The Realme 10 Pro Plus includes a lower-end Dimensity 1080 processor that runs at a maximum frequency of 2.6 GHz and is combined with up to 12 GB of RAM and 256 GB of native storage. The user interfaces are nearly identical: both phones run Android 13 out of the box, with ColorOS 13 and Realme UI 4.0 heavily modified. Realme UI 4.0 is simply a modified version of ColorOS 13.

The Realme 10 Pro Plus has a larger 5000 mAh battery with longer battery life. The charging speeds are the same, with the Reno9 having a smaller 4500 mAh battery.