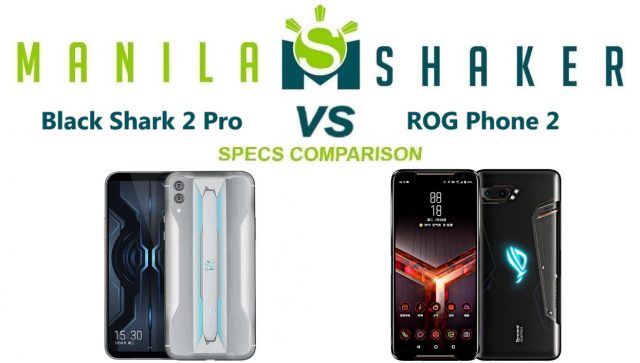 Two gaming smartphones have been released in mid-year of 2019. One is not holding back with the overkill features, while the other is delivering more performance for a cheaper price. That said, would you get the P50k ROG Phone 2 or the P22K Black Shark 2 Pro (prices are directly converted from global prices)?

Which is a better buy between the Xiaomi Black Shark 2 Pro and Asus ROG Phone 2?

Xiaomi Black Shark 2 Pro has the same unapologetic gaming aesthetic, compared to the slightly all-improved subdued look of the Asus ROG Phone 2. You have more options to play around the RGB lighting of the former device, however, the latter device has a copper vent that’s said to improve airflow. But aside from the design, you also need to take note of the weight.

Black Shark 2 Pro weighs almost exactly the same as Note 9. While the ROG Phone 2 is the heaviest phone at 240g, and we still haven’t included some of its accessories.

While both are sporting Snapdragon 855+ with at least 12GB RAM, you can expect nearly identical gaming performance. But when it comes to using the device, the ROG Phone 2 can switch back and forth between ROG UI and near-stock Android UI. Also, the internal storage is 512GB at most, while Black Shark 2 Pro is capped at 256GB only.

Another aspect that might make you choose Asus’ gaming phone is the crazy smooth 120Hz refresh rate. The screen refreshes at a faster rate, providing smoother animations. When it comes to touch latency, based on the claims of these brands, Black Shark 2 Pro is faster at 34.7ms vs the 49ms of ROG Phone 2.

There’s a chance that the audio experience is better on the ROG Phone 2. Not simply because it comes with hi-fi and DTS support, but rather the option to plug in a wired headphone. And with the added accessory, you can even add another wired headphone to share with another friend.

Battery-wise, there’s a massive 2000mAh difference between the two. The ROG Phone 2 clocks in at an absurd 6000mAh, with Asus claiming up to 7 hours of PUBG Mobile gaming when under 60Hz. Of course, this number is expected to drastically go down with a higher refresh rate.

Despite the huge difference in features between the two gaming devices, we still feel the decision will come down to the price. The Black Shark 2 Pro is literally half the price of ROG Phone 2. What it offers is more than enough for both casual and competitive gamers. But gaming is about breaking boundaries, and that’s exactly what Asus has to offer. There’s a special demographic for what Asus is doing right now. It just so happens to be a small portion of the market, given the price and features offered. However, we feel like we are now entering a new era of mobile gaming. Either way, we think these devices are great at their price points.

Xiaomi Redmi 8a Dual Vs Realme 5i – Specs Comparison