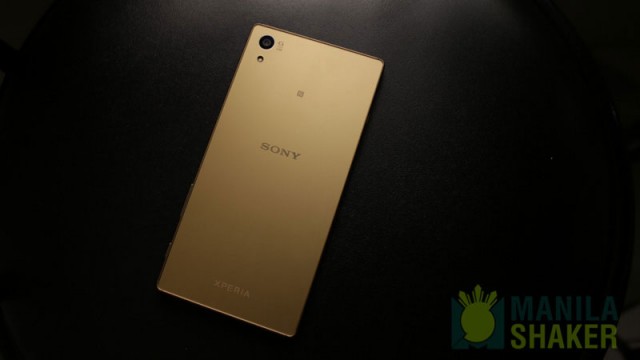 It just took 4 months for Sony to release the successor to the Xperia Z3+ (Z4 in Japan), which is the Sony Xperia Z5. Officially launched and priced in Philippines for P35990, the Xperia Z5 promises the best camera, retained 2-day battery life and sleeker and sexier rugged design. Will the Xperia Z5 hold to our expectations? Let’s find out on our review.

Gone is the glassy back from the Xperia Z3+. The new Xperia Z5 went metal for its frame as well as to its minimalist, yet, classic back and edges. The familiar bumper corners are still there to save you from cracks and alarming damages.

Despite featuring luxurious design, the Z5 remains rugged and robust, thanks to the IP68 rating of up to 1.5m waterproofing and dust resistance.

Our unit is on gold variant which I think is the best-looking among the other options that Sony’s offering. Other variants include black, white, and the new one, green, which I think is also attractive as the Gold.

The familiar signature Sony button is no more, it has been replaced by the power/lock and fingerprint sensor combination key at the right side. Both metal-made dedicated shutter and volume rocker keys are well positioned along side with the sensor. 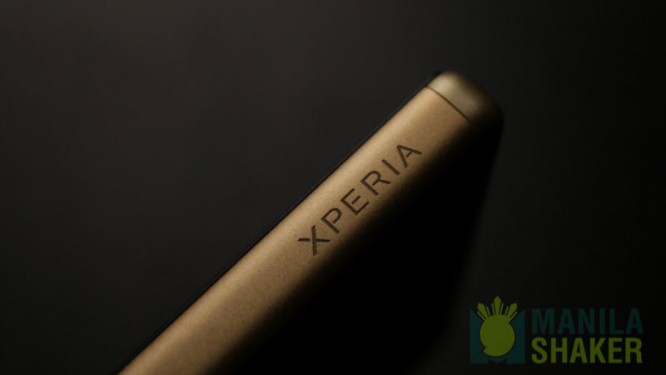 Aside from the fingerprint addition, there is now an engraved XPERIA text on the left bottom side of the phone, which distinguishes the unit from other Z series.

What we didn’t enjoy is the design and form of the fingerprint sensor, which is not ergonomically friendly, in my case. It is laid too shallow, area is too long and there is no physical border around it. So sometimes I need to run my thumb twice or so across the right side just to unlock my phone.

The flap door on the top left side houses the tray for nano SIM card and microSD card. Access to it is easy; just pull out the door and tray then push back when done inserting. At the bottom there is a lanyard eyelid and the cap-less microUSB port.

The Sony Xperia Z5 is a well-crafted piece of metal and glass. It is solid, luxurious and sleek in hands and the design is a standout and very refined. I had a very minor issues on the fingerprint’s positioning and form, but aside from it, I have nothing to complain on the build and design of Xperia Z5.

I see no reason for Sony to upgrade the 1080p resolution on the 5.2-inch screen as far as the top-class display quality is still present, true to Xperia Z5. The viewing angles are solid and the colors are pleasing and natural. The default option is X-reality, which is still the best configuration to contain the neutral colors while enhancing the overall viewing experience. Of course, if you’d want for flatter and technically accurate display, you have to turn-off the enhancement from the settings. Meanwhile the last option is Super-vivid which bump up the saturation, producing more AMOLED like experience. I will stick to the X-reality anytime, thanks, but it’s nice to have those options.

Camera in still image and video

The Sony Xperia Z5 sports new 23MP camera along with Z5 Compact and Premium. I have to admit that I was stunned by how accurate and crisp the images taken from the new camera on Xperia Z5. I was blown away by the natural colors and spot-on exposure and white balance. For half a year already, the Xperia Z5 is the only camera phone that has made me excited again, though LG G4 is still a very close rival to it.

On daylight mode, I used the 23MP resolution which is acceptable given the amount of light (no more extra work for the hybrid image stabilization). During night and low light shots, I picked the 8MP resolution, which surprisingly, produces better exposure. You just need to mind that you have to hold-on steadily at these scenarios.

We tried comparing the Xperia Z5 to the Galaxy Note 5, and ended up the Z5 beating the latter in almost all situations. Miss no mistake: Galaxy Note 5 is not a bad camera, it is still a great shooter.

Selfie shots on the Z5 is very decent too. Toning and softening are well-mixed and not very aggressive unlike on the Note 5 which overly smoothens and destroys the natural colors of the skin.

The Xperia Z5 is capable of 4K UHD video shooting, output is par with still image quality, which has excellent colors, accurate exposure and crispy detail. But the biggest video feature on Z5 is the focusing capability. It has very smooth transition when changing its focusing areas, and most notably the focus speed is very fast (0.03 sec) — the fastest from the camera phones we’ve reviewed.

We are putting the Sony Xperia Z5 on the no. 1 spot as the best camera phone in the market right now. So if you’re looking for the best, then you should try checking out the latest of Sony.

We liked how Sony approach the software experience on their devices, which is subtle and kind of minimalist. The Xperia UI on top of Android 5.1.1 Lollipop (update/upgrade to Android 6.0 Marshmallow this year) looks lean, and feels smooth and refined; it is far from the cartoonish UI of TouchWiz on Galaxy or the ZenUI on Asus Zenfone. The default Sony apps and customizations are handy and works better than what stock Android experience offers (e.g. Google Photos). Third party apps number is very minimal and not intrusive. All told, the Xperia has has quite flat and near-vanilla Android experience, but productively better.

It didn’t stop Sony from getting the same Qualcomm chip despite the Snapdragon 810 fiasco that happened earlier this year. The new Snapdragon 810 octa-core chip is a 2nd generation which has been redesigned to provide the best thermal system control and stable performance. Paired with the chip is the 3GB of RAM, 32GB expandable storage of up to 200GB using a microSD card slot.

In real world scenario, the Xperia Z5 provides smooth and fluid experience most of the time — browsing the web, running hefty games and tasks, multitasking and so on. There are very rare visual hiccups, but that’s all about it. The only big complaint we got is the shutter speed issue on the camera. But I guess we shouldn’t solely blame on the chip alone, camera algorithms and software are key factors too in shutter speed.

Checkout our synthetic benchmark scores from Z5 as well as the speed and actual usage on the comparison video down below.

Our standard battery test (HD movie playback, in airplane mode, sound off and brightness at 50%) showed that Xperia Z5 has 11 hours and 45 minute battery rating which is very good compared to iPhone 6s with 10h 30min, LG G4 and Nexus 5X, both have around 10 hours.

In real life, the 2-day battery promise of Sony is achievable if you have intermittent gaming schedule plus around 2 hours of browsing time each day. Adding tasks will surely drain the battery faster, but our typical daily use proves that Xperia Z5 has reliable battery life. Of course, if you want to extend the battery life just tick the stamina mode from quick settings.

Audio quality on the front-facing stereo speakers of Xperia Z5 has clear and decent vocal output. Bass is somewhat average, but considering the stereo feature, it is understandable that sound power or volume level is halved and distributed evenly on each speaker. What you would get from stereo setup is richer movie and video playback experience.

In the first place, Sony wanted to make us realize that the best of all things can happen in one package, and look no further, the Xperia Z5 is built with all things best from the Japanese giant. The Z5 has the best camera in its class, as of this writing. The classic and premium design has been improved while retaining the rugged feature. The combination of snappy Snapdragon chipset and leaner Android makes a great experience. Although the asking price is a little steep for P35990, still, everything you will be paying for is worth it.

What we did not like from Sony Xperia Z5