Samsung Galaxy Note 5 is finally in the Philippines. Today we unboxed the Note 5 together with a quick hands-on on the device with its S-Pen alongside with our first impressions.

The unit we received is single SIM 4G LTE variant in 32GB model. Luckily, we got the Gold Platinum color which we think the most luxurious from the four color options.

What’s in the retail box of Galaxy Note 5

Build with glass and metal frame, the Galaxy Note 5 feels very premium and sleek in hands. It inherits most of Galaxy S6/S6 Edge aesthetics especially on its sides. The back is curved, unlike the Galaxy S6/S6 edge/edge+ which we think is more comfortable to hold. It is also the most attractive sight from it.

Flaunting on front is a 5.7-inch Super AMOLED display with 1440p resolution backed with Gorilla Glass 4. Overall front design is so Samsung-ish with the logo, selfie camera, earpiece, and sensors located on top. The home key acts as a fingerprint scanner too, besides it is the capacitive back and multitask keys.

On the back you will find the 16MP camera the same that is found from Galaxy S6. Pairing the shooter is a LED flash, heart rate sensor and CSS (color spectrum sensor) similar to LG G4. 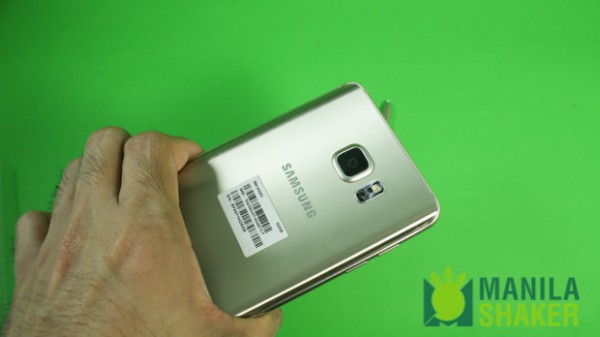 A mono speaker at the bottom is positioned along with the microUSB and 3.5mm audio jack ports. The S-pen holder is at the bottom corner, access to the S-pen is through push of the protruding holder of pen.

Once S-pen is removed, the phone automatically detects and pops up the S-Pen floating menu. We tried the S-pen’s handwriting recognition and we find it fun and smart. It is accurate in transcribing my handwriting despite my unrecognizable penmanship.

Everything is fluid in the new TouchWiz on top of Android 5.1.1 Lollipop. Transition to apps is handled smoothly by the Exynos 7420 chip and 4GB RAM.

So far, so good. But we will pass our further judgment in our upcoming review and comparison. If you have something in mind such as suggestions for our comparison, please do comment it down below.