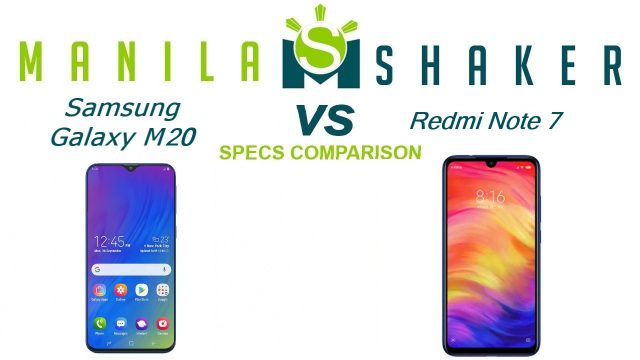 Our recent specs comparison of the Samsung Galaxy M series proved that the South Korean company can also compete in the budget segment. But if it’s taking on, what it seems to be already the best budget phone in early 2019 – the Redmi Note 7, can the Galaxy M20 hold its own ground?

Which is a better buy between the Samsung Galaxy M20 and Redmi Note 7?

Samsung tried really hard to cut the cost of the Galaxy M20 as it opted to use a polycarbonate body that pales in comparison to the Redmi Note 7’s metal and glass combination. But shifting the view up front, the former device has slightly thinner bezels while the latter takes advantage of its Corning Gorilla Glass 5.

Speaking of, both phones have a 1080p+ display resolution but the Redmi Note 7 will provide better viewing angles and more accurate colors with its IPS LCD panel.

Checking out the performance, we have a better performing Snapdragon 660 against the India-specific Samsung Exynos 7904. But where you want to pay attention to are the cameras.

While both are sporting dual main camera setup, the Redmi Note 7 just dominates on paper with its 48MP + 5MP sensors. We can say the same thing with its 13MP selfie camera.

Feature-wise, both are 2019 ready as they sport Bluetooth 5.0, USB Type-C, fingerprint scanner, and the (dying) audio jack.

In terms of longevity, the Galaxy M20 holds the advantage with its massive 5000mAh capacity. But you can’t also go wrong with the 4000mAh battery of Redmi Note 7 that even comes with Quick Charge 4.0 at 18W.

Under 4GB/64GB territory, the Samsung Galaxy M20 is cheaper at an estimated ~Php8,200 compared to the ~Php9,200 of the Redmi Note 7. But given the differences between the two, Xiaomi’s budget offering seems to be a better buy here. As for Samsung, it did fairly well and we hope it only gets better from here.

OPPO Launches 125W Charger and 110W Mini-Charger No Bigger Than a...