With Realme C12’s latest introduction last August, along with its original 3GB/32GB variant, it is now being joined with a new memory variant version that will be launched in India. This will have 4GB RAM along with 64GB memory.

The original version was priced at about INR9,999 or PHP 5,990 in the Philippines, the new variant, however, will be priced at INR 1,000 which will be PHP 659.04 more than its original. This new variant is now available for purchase through Flipkart and Realme.com and it comes in two color options – Power Blue and Power Silver. It will also be available for purchase in retail stores on January 20.

The Realme C12 is powered by the Hello G35, which has a 6’5” HD+ LCD, and a 13MP triple camera. It also includes a rear-mounted finger scanner along with a 6,000 mAh battery which can charge through a microUSB port. Check the full detailed specs here.

Meanwhile, Vietnam has seemingly leaked the C20 through a promotional image that has been circulating online. 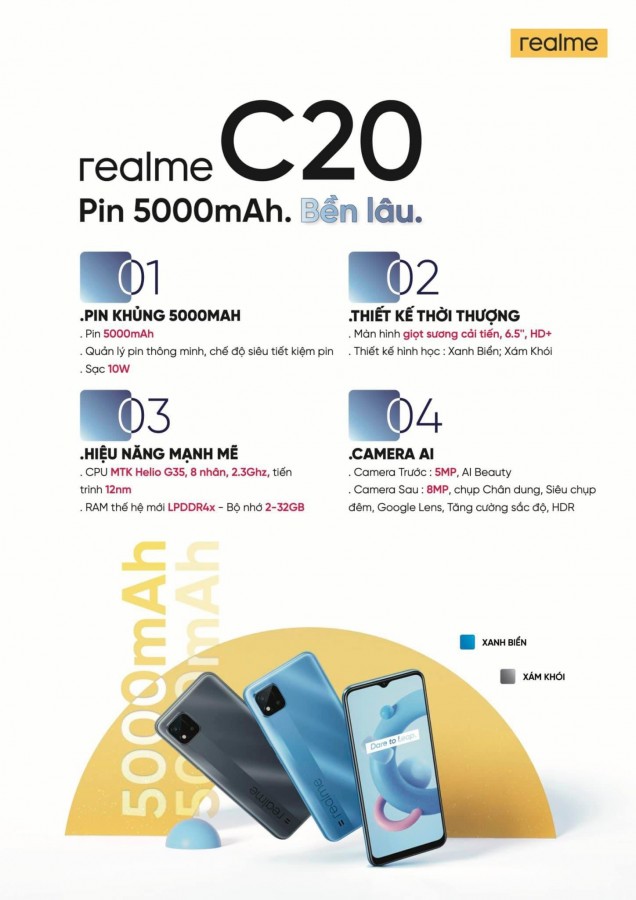 It looks that the Realme C20 will have a similar look to the C11 and it will be available in two colors – Black and Blue. This will be powered with the Hello SoC and will be accompanied by 2GB RAM and 32GB storage.

The C20 will also feature a 6’5” HD+ screen with two cameras – a 5MP selfie shooter and an 8MP primary camera. Powering this awesome phone will be a 5,000 mAh battery with 10W charging.

Although Realme is yet to announce its latest product, Vietnamese retailer FPTShop has placed it already on its site and priced it at VND2,690,000 which will be roughly around PHP 5,605.62 in the Philippines. Right now, there are no official statements on when the new phone will be launched but with high hopes, it will come sooner than later.